Catching up with a former co-worker 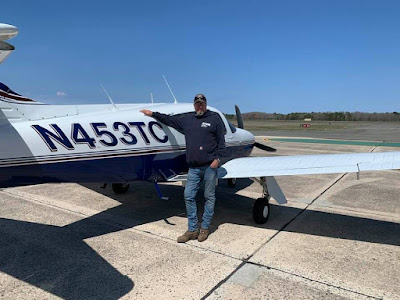 One of my former co-workers at the Cape May Airport will be retiring.  I believe he said he has nine days to go, I remember that countdown. Although I was in the engineering department and my friend John was in maintenance, our paths crossed on many projects. My main coverage was the New Jersey Airports and Cape May-Lewes Ferry Terminals.  John was always an up front no BS kind of guy, which worked well for me since I was never shy about my opinion, and we both followed the rule of doing the job right the first time vs the just get it done corporate attitude. 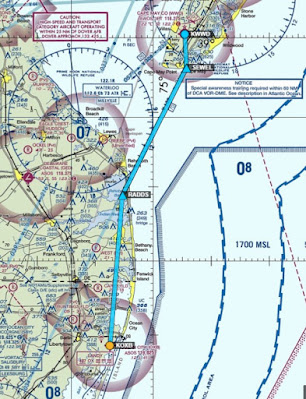 So this morning I decided to make my way over to the airport for the short hop across the Delaware Bay. Pretty straight shot to Cape Henlopen and then direct to Cape May, with a possible circle to lose some altitude before joining the pattern.
My departure time will be around 10am with the flight taking just about twenty minutes for the 44 miles.  I launched around 10:40 so I was pretty close to my schedule. The flight was smooth and for the most part quiet as I made my call departing the pattern and heading North East. I flowed through my typical WIRE mnemonic; Weather, Instruments, Radio, and En-route altitude/pattern altitudes.

As I followed the MD and DE coastline I switched to Dover Approach to listen in. Once reaching the Cape, and going feet wet, I switched to Atlantic City Approach for the ride across the Delaware Bay. 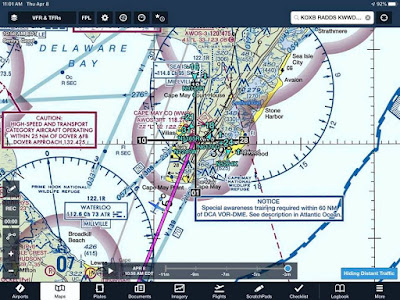 I was now letting down for Cape May and I needed to switch to CTAF. It was another quiet ride until an F16 called Atlantic City with an emergency. The military flight was at seven thousand and heading for ACY, the approach controller pushed all flights clear of the airport until he had a handle on what was the emergency. It sounded like ATC tried to have the F16 meet up with additional F16's heading back to Patuxent so they could at least provide a definite location of the emergency aircraft.  I never heard the military aircraft just the ATC side of the conversation.
This would have been a perfect time to monitor ATC on comm two but I wanted to focus on traffic in the area to get on the ground safely. I made my calls and crossed midfield to enter a left down wind and followed with a real nice landing  making the first turn off for the parallel taxi way.
John met me at the terminal and we sat and enjoyed lunch. It was great catching up and checking on some other former co-workers along with airport and ferry terminal updates since I've been gone. I did manage a picture of John next to 3 Tango Charlie for this blog, and with that shook hands and vowed to keep in contact when either of us our in each others home town. Most likely I'll drag a few of the old timers out to meet for breakfast again when I'm in Cape May.
I climbed aboard after a brief walk around since there were aircraft now parked on each side of me. 3 Tango Charlie started right up and with the oil temp showing well into the yellow I taxied for runway one-zero. Once in the air I dialed up Atlantic City, they were back to normal operations. After making two circuits over Cape May I pointed for home, crossing the Bay at six thousand. 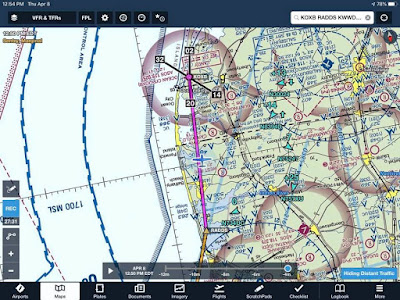 While I enjoyed another smooth ride I set up for my arrival into Ocean City. ASOS noted and radios set I made for runway one-four.  It was starting to get busy at home. One Cessna took off, one was landing, and there was an Arrow coming in from the North West about the same distance out as me.  I advised I would turn west and fall in number two behind the Arrow and continued my search for a visual confirmation. I spotted the plane on final and turned base to follow him in, slowing down the Commander for spacing. I made another nice landing at home and taxied for the hangar.  A fun day of flying even if it was only an hour total. It was great to catch up with John and I enjoyed a smooth ride both ways, a first for me in weeks.
Posted by Gary at 10:30 PM