Breakfast with Charles at Cape May NJ

On the way to Cape May...
Since I didn't get out on Saturday for the BAC Fly-In to Sussex NJ I really wanted to get some fly time today.  Charles and I texted back and forth planning to meet up with our brides in Cape May NJ for breakfast at the Flight Deck Diner.
Mary has been battling a sinus headache for two days and woke up feeling a little better but decided not to fly. I think that's a good call since I was needing a bit higher altitude having to cross the Delaware Bay. After swapping text messages, Charles’s bride also backed out. It was the boys day to fly! 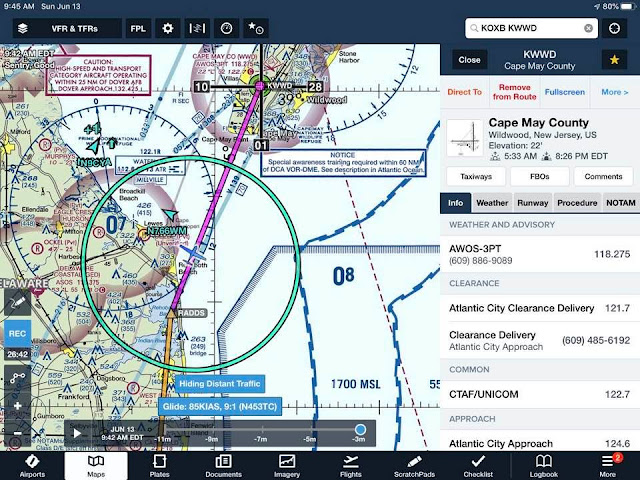 I was in the air by 9:15ish and made a beeline for Cape Henlopen. I crossed the Bay at seven thousand three hundred feet and let down for Cape May about half way across the 11 mile salt water span. I did overfly two Ferry's crossing closer to the NJ side. I passed over the Cape May light house and followed the coast a short distance north before turning for a long left down wind for runway one-nine. I still needed to loose some altitude. 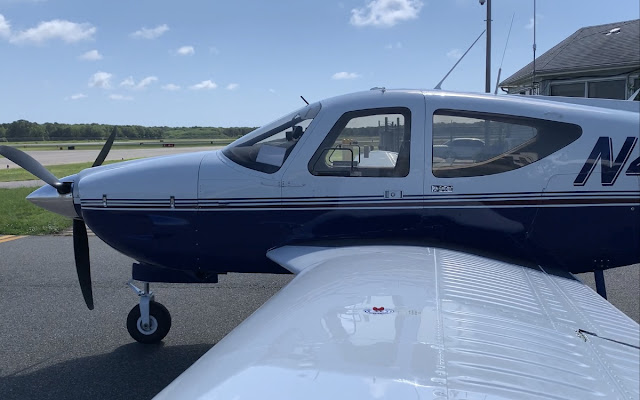 I made a nice landing and taxied for the ramp at the restaurant, adjacent to the operations building. Once shut down I managed to shoot a short video of Charles and his Piper Warrior 160 pulling up and shutting down.
The restaurant was packed, every seat in the lobby filled with a body...maybe Cambridge was a better call.  Our wait wasn’t too bad, and we got a table instead of the counter seats we had asked for, thinking it would speed things up.
Charles and I each had an omelette with toast and I added bacon. There has to be a meat with breakfast. Once finished we settled up the bill and headed out to the ramp. Traffic was picking up and we enjoyed hanging out at the planes and chatting with a few of the pilots.
We each climbed aboard our rides and got the fans turning. The two pilots we were chatting with were first to taxi out, Charles followed and then I fell in line.  The young pilot that was farther down the flight line taxied out behind me.  The conga line made its way to runway one-nine and one by one we turned at an angle and each did our run up. Since I had to cross the Bay I circled over the Cape May ferry terminal prior to going feet wet.
Once at altitude I made the crossing and eventually let down for home.  The jump plane was making calls counting down to dropping the meat bombs as the airport activity was picking up. 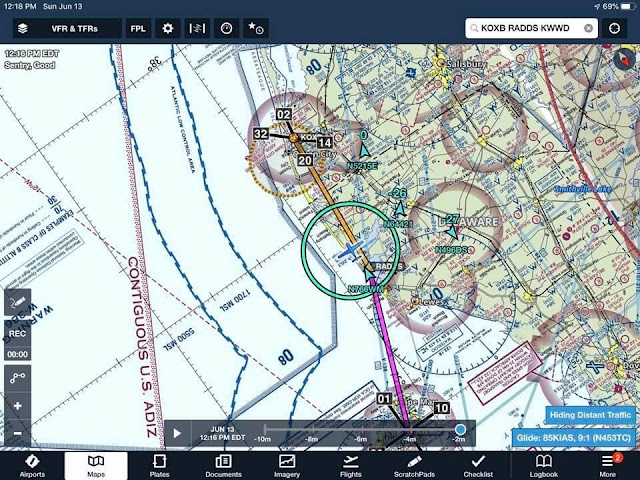 I extended my down wind and a Cessna circled south of the airport. A Bonanza was entering the down wind and a Cirrus was heading in from the north. I turned base and final and watched the first chute circle down towards midfield. Once the first jumper was down I called about a two mile final and landed long. There was a second chute that jumped well after the first and they were circling over the midfield infield area. I didn’t want to taxi off the runway where they were landing so I taxied full length before clearing.  The conga line of planes made their way in behind me. It was busy!
Posted by Gary at 10:03 AM

Glad you got to get in the air. Always fun to get away and challenge the brain.

I had fun! I wish my bride was feeling better so she could have joined me. There’s always next time.