Return Visit to the Shop 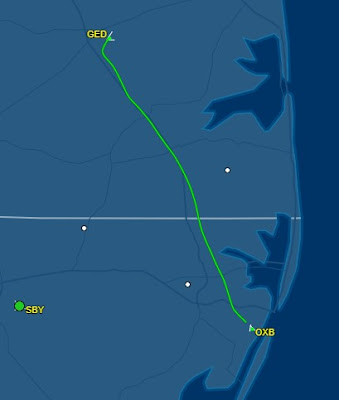 I got a call from the shop on Friday asking if I could bring 3 Tango Charlie back in for a quick check with regard to the fuel pump.  Apparently while cleaning the screen and replacing the O ring on Bill's Super Commander the guys noticed another O ring in the same container. The concern was they may have placed a similar O ring in my plane but not the correct one. There were no leaks from my pump in either of my last two flights and there was no leak during the run up leak test to complete the annual.  Making the trip to confirm the O ring part is correct is a no brainer.

I was at the airport at 8am and mounted cameras and following my detailed pre-flight got the fan turning around 8:30.  It's just a short hop back to KGED, Delaware Coastal and fifteen minutes after launch I was shutting down in front of the shop hangar door. 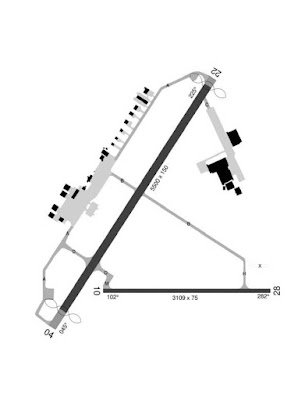 As I noted the hop was quick but not without some concern as I was reporting short final. I had been making my calls at ten, five, down wind, base and final. On short final I heard a call for a plane landing on two-eight. I asked for its position multiple times with no response. I did not have any traffic on ADS-B. LAHSO is now in full on mode.  I had to erase the land long thoughts and exiting on the last taxiway in front of the shop for getting stopped, and now clear prior to run way two eight. I pulled the remaining power early and made a nice landing, exiting at the first taxiway across from the restaurant at the terminal.  Op's said they thought that plane may have been at Millville, KMIV, landing on their R/W 28.
Op's was correct.  After watching and listening to the video I clearly heard the aircraft give the airport landing as Millville, at least three times. Talk about a brain fart. I was busy getting configured to land and it just didn't register. 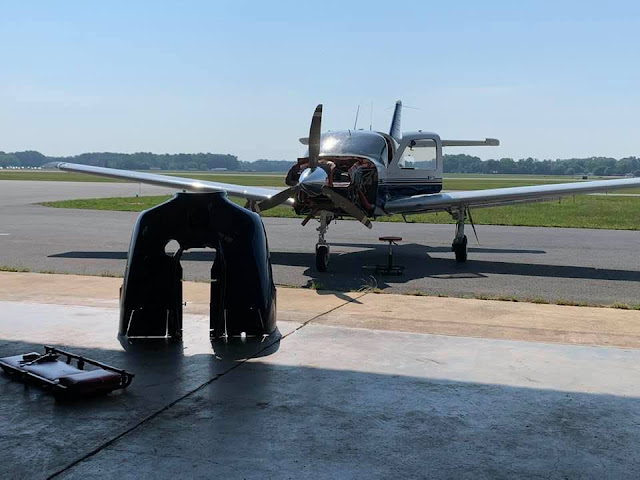 I shut down at the hangar and the guys quickly removed the top and bottom cowls and got right to work. With the O removed it was checked and confirmed it was the correct part. Another new O ring was installed and 3 Tango Charlie was buttoned up with a clean bill of health.
Let's get home
I taxied out for runway two-two and launched for home.  Power pulled back and cruising along at fifteen hundred feet, still warm but at 75 degrees it was better then 90 on the ground. I landed on runway one-four with a seven knot crosswind and taxied clear.
I have two flights coming up, both for the Beech Aero Club. On June 12th we are meeting up at KFWN, Sussex NJ and on the 19th we are meeting up at N81, Hammonton, NJ. It's good to be back flying!
Posted by Gary at 3:18 PM

I'm impressed that they recognized the potential problem with your fuel pump and called you back in to check things out. Fantastic!

Chris, it definitely gives me and the bride a warm and fuzzy. It’s an excellent shop and I really like both of the guys there.