Yes, I know it can get repetitive but with great eats at Katie's we just cant help ourselves.  Mary and I decided on a quick flight to Cambridge MD for breakfast then home for some antique shopping.
Ocean City was busy with transient traffic and the jump plane. As I tugged 3 Tango Charlie out on the ramp I heard voices. No, not voices in my head and not God steering me in a specific direction, just meat bombs doing their thing.

I twisted my neck and looked over my left shoulder and then up at the sky and sure enough a bright red white and blue canopy and two guys chatting like they were sitting in the FBO. At least it wasn't the typical yeehaws or woohoos.  Insert eye roll.
We taxied out for three-two and launched for the short hop west. The ride was smooth, the temps a cool sixty-eight degrees and my bride was right seat. Life is good.
I made calls for ten, five and short final then followed with a real nice landing on three-four. Once  3 Tango Charlie was secure we headed inside to grab a table, watch the hummingbirds swarm the feeders, and place our food order.
The restaurant only had a few tables filled so we were quickly seated. Mary ordered the sausage gravy over biscuits and I ordered my favorite, creamed chipped beef over home fries and added a side of scrapple. 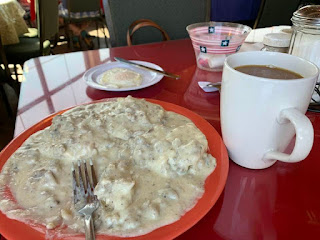 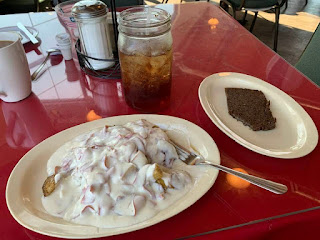 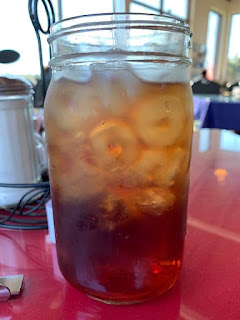 Katie's has the BEST sweet tea anywhere and it always comes out in a mason jar.  The servings were way to big for us so we boxed up half of  our plates and now have breakfast for tomorrow morning.
We somehow managed to waddle out to the plane and climb aboard. The plan was to launch for home and maybe fly the shore line south from Fenwick Delaware south to home base, Ocean City.
As I taxied out a plane landed on the grass on my left side between the runway and the parallel taxiway. It was interesting to watch the plane set up and I wanted to make sure it didn't drift our way with the winds. I completed my run up and rolled for take off on three-four. A pilot called entering the downwind so I would be clear of him.  A Cessna called a 45 degree entry for three-zero, I figured she was landing on three-four. As I climbed out I made my crosswind call and that Cessna called entering downwind and flew right above and in front of us. Thankfully I had visual contact and immediately stopped my climb and nosed over. Crisis averted, always keep your head on a swivel. I did apologize to Mary for the quick weightless maneuver, explaining why I did that and no it wasn't to revisit our breakfast. 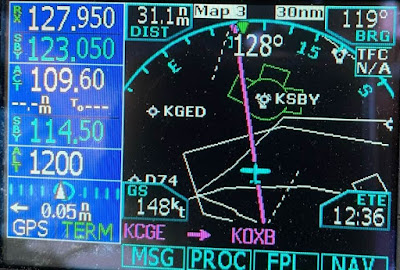 We enjoyed the former headwinds now sporting a comfortable tailwind for the ride home. I made my calls for Ocean City and decided on runway three-two for our landing. I landed a bit long and let 3 Tango Charlie roll out for the final taxiway just before crossing two two-zero. 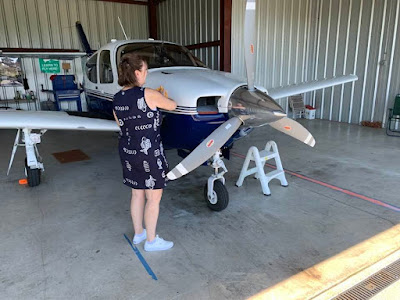 Mary helped clean the bugs off the leading edge while I cleaned the windscreen. With the help of our tug I pushed the plane into the hangar and ended our airport time, until our next visit.
We bugged out and pointed for Route 50 and one of our favorite antique shops. Mary added a couple of items to her collection and we headed home to relax in the AC.
Posted by Gary at 4:40 PM