What a FANTASTIC day !

Mary and I decided to fly to KESN (Easton,MD) and meet up with the group from Big Sky Aviation out of Millville and

Cape May, NJ. Special thanks to Beth and Doug for getting the group together and having a very nice shuttle bus waiting to take us into St. Michaels.

Mary and I asked Jo Ann to join us for a day of shopping......yeah, like we had to twist her arm to team those two up

to shop ;). This was however, Jo's first trip in a 4 seater. Mary and I had 679er ready when she arrived and just had to wait for the fuel truck to top us off. The Ladies are waiting inside the airplane while I see to the fuel caps and sign off on the fuel ticket. Mary hops out and I perform the "Piper roll" to get into the left seat. Jo seems pretty excited to me as we get ready to roll.

Wilmington Tower clears us to taxi out followed by a cleared for take off r/w 27. Six seven niner jumps off the ground and climbs out seemingly as eager as we are to get to Easton. Flight following is brief as is the trip. I announce my position for Easton traffic at 15, 10 and 5 miles out with a full stop for r/w 22 entering on a right base. I have a visual on one aircraft(Cessna) practicing an engine out and they touch down as I am about ready to turn final. with the high wing away I settle in for a very gentle landing with a 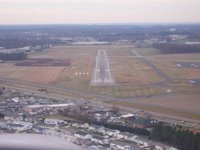 short taxi to the Terminal. We three pile out and I lock up the bird after final checks for master and keys. Good to go, as the lineman chocks the nose wheel and directs us to the shuttle awaiting our arrival.

It's a short 12 mile ride to St. Michaels as we pull up just in time for the 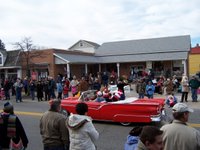 Christmas parade. The Ladies start to hit the shops as we make our way down one side of the street. I manage to watch some of the parade ducking in and out of the shops trying to keep up with Mary and Jo. The parade had a marching band (pictured in the background of Mary and I)horse and

carriages, the Maryland rough Riders horse parade team and vintage cars of all ages including one of my favorites the Roadrunner.

As the parade marches by the ladies continue to knock off stores like a little kid on Christmas day taking out the toy soldiers. One by one they fell, who ships, who does not, ornaments only here, antiques there and last but not least my favorite.....a place to eat.

We made a stop at Oyster Cove for lunch and a break from the cool temps. I had the hot roast beef which I must say was very good. Mary had an oyster sandwich and a cup of soup that she seemed to enjoy and Jo had shrimp salad. While waiting for lunch a young couple maybe 30ish walked up next to the front window where we were seated. The father has 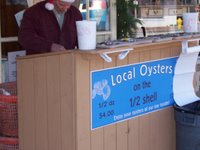 a small tray of oysters and Mom and Dad both look to be asking the maybe 4 yr old daughter if she would like to try one. I'm already feeling ill just thinking about her slurping one down. Sure enough daughter slurps one down and thinks it's great. I turn green while Mary and Jo (oyster eaters) tap on the window and give the folks a thumbs up. The little girl just smiled. Mom smiled too but Dad puffed out his chest and gave the thumbs up right back......BLEcccccccch...get the kid some fries will ya'!

We continued shopping and eventually made our way to the Acme market to catch up with the group. 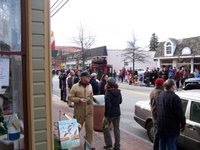 Everyone seemed to have a great time. The taxi pulled up and hauled the first portion of the group back to KESN and we asked him to loop back for us, he agreed. In the mean time a second cab from the same company pulled up and we hitched back with him taking on two folks from Millville Smokey and his lovely wife. It was a bit...um...cozy in the front seat as the driver was teased by Smokey and his wife as she continued to stir the pot saying he the driver needed a hug. The drivers looks were priceless ! Good guy and got us back safe.

We said our goodbyes and saddled up for home. An abbreviated 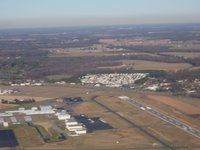 preflight complete we called clear prop and six even niner came to life. We taxied out, completed the run up and departed r/w 22. The ladies took some nice shots as I announced and departed the area on the 22 right downwind. It was a nice ride home picking out landmarks and recapping the day. I think Jo had a blast.

I called Wilmington tower and advised having current info along with direction altitude and intentions for a full stop. The tower advises enter left downwind for 27 and call at 3 miles or so (I can't remember). Bridges clearly in view

and Mary had picked out our other familiar landmark the cooling towers at Salem. We 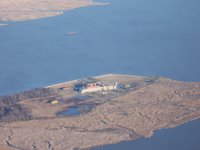 also got a good look at Fort Delaware pictured on the tiny Island in the Delaware River.

Cleared for landing on r/w 27 I settle in with a nice landing and another quick taxi to our tie down at Red Eagle Aviation. We button up and head home

after a fun day. Mary and I can't wait to go back in nice weather in the spring or summer. Flying has really opened up a new world to us both. We have met so many nice people and the opportunity to visit places without all the hassles of driving so many hours has been a blessing. Life is Good....