The Metar at Wilmington called for winds out of the north west at seven knots and few clouds at 4,300. Mary, Jaime and I climbed aboard 679er to keep warm. I called clear prop and 679er did not sound happy as she grunted out a few turns of the fan. I gave a few more shots of primer and gave it a second go. 679er tried to start but she was not liking the cold any more then her three passengers. I went through the

process again and this time she turned a few revolutions and fired. Oh she was rumblin' and stumblin' and I had the rpm's at five to six hundred as she worked to warm that oil and her cylinders. It's times like this I really wish we had a hangar for our girl. We were just past two tenths on the hobbs as the oil temp needle climbed into the green and I slowly raised the rpm's. I made my call to Wilmington ground for taxi clearance and off we went.

We climbed out of Wilmington on runway one with a left turn on course approved. The sun was bright and warm on my face as we headed south west.

Looking south east we had a clear view through the sun glare of the Salem cooling towers. I crossed the C&D canal and called for flight following as I passed over Summit (KEVY) at three thousand. I dialed in my squawk code and kept on my heading and altitude. Instead of the expected hand off to Potomac, Dover turned me loose squawking VFR and on my own. Not a problem, just 25 north of Easton (KESN) and I'll call up the tower at 20 miles. I flipped to comm one and noted the ATIS once again for ESN and got a handle on the traffic flow prior to my call up. I made my call and was directed to enter and advise two mile right base runway three three, I acknowledged and started to concentrate on finding the airport. I was

now about 7 miles out and had no visual on the airport, very frustrating.(Pictured right is the Chesapeake City Bridge on Maryland 213)

I pulled the video camera so I could have a better view looking for the airport so no video of my landing.I was holding 1,500 just above pattern altitude until I had a visual and was ready to enter as directed. Finally at 5 miles I see runway two four and position for my right base on three three. I advise of my position and am cleared to land. Not a bad landing at all and a nice smooth run out to taxiway Bravo. As I taxi clear of the runway I hear Rob receive clearance to land. I try to slowly taxi back but we are turning left on taxiway Alpha and miss he and Becky landing.

Rob and Becky walked into the Terminal and J

eff and his group followed. I signed for the rental van and we all piled in anxious to get to St. Michael's. Jeff tried for the courtesy car but it was a no go for the day, he had a plan B ready with a rental car reserved. The van was ready and once Jeff was in his car we headed out. I blew

right through my right turn for St. Michael's and had to make a u-turn down the road a piece. Rob got me squared away and we were soon entering main street with all the decorations and shops.

We found a great parking place behind one of the churches and Jeff pulled in alongside. That's pretty much the last we saw of Jeff and his group, they were off to find a seat for the parade. Our group headed for the shops, go figure. Just kidding ladies it

was the plan, I know. Mary, Becky and Jaime hit the very first store on the north side of the street and it was game on from there. Rob and I took in the parade snapping pictures talking flying and freezing our tails off. We did duck into a store on occasion but only to keep warm, there was no thoughts of shopping for us.


The parade featured marching bands from the local high school

and a few others. There was the rough riders on some very pretty horses, antique cars and trucks, boats, tractors and yes, even a few fire trucks. Let's not forget the big man himself, jolly old St. Nick. I guess start to finish the parade lasts about an hour. Good fun, really nice crowd and it raises money for a good cause. The

ladies didn't get to see much of the parade their focus was on the shops but Rob and I have some nice photo's to post.

We made a stop for lunch at the Carpenter Street Saloon (file photo). Mary and Jaime had cheese steaks, Becky and Rob had cheese burgers and I had the 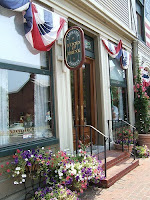 Talbot street burger with cheese and mushrooms. The food was good and the service too. Thanks Jamie for picking up the tab, that was very nice of you. I'm glad you at least let the men leave the tip. About now our day sounds like it was winding down, or should be, right? Ho Ho Ho, not so fast my readers there is still the south side of the street and a bunch more shops. That's right the ladies knocked them out one by one as Rob and I searched for the sun like two stray cats trying to keep warm. Note to self, shop in reverse next year so we have the sun late in the afternoon instead of the shadows of the buildings.

The end was in sight, yes the last few

shops were finally at hand. The men went to get the van and of course we wanted to have it nice and warm for the girls. We cut through the church parking lot and got our ride warmed up and repositioned on the main drag just a few shops up from the last known location of the shopping whirl wind trio. While we sat in the warm van these three gals came by and asked us for a lift, we gave it some thought, then let them climb in. It

was a fun day and time well spent with friends. Mary and I are looking forward to the next time we can all get together.

We made our way back to the airport and you guessed it, I made a wrong turn. Yes, we made it back and while the men pre-flighted the birds the ladies sat and chatted in the airport terminal. Rob made a call for an updated briefing and I stood by listening, I was interested in any pop up TFR's but we were good to go. A few pictures were taken on the flight line then we loaded up for home. Rob called for his taxi

clearance and I followed. We had to hold short of runway six - two four for a twin engine FAA Flight Check aircraft making a low pass. I did my run up while waiting since my six was clear. Each of us were now cleared to cross the runway and proceed to the run up area. I went around Rob since he still had to complete his run up. I had to hold short for a Cessna aircraft on short final then I was cleared for takeoff. The video was pretty crappy 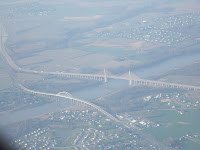 until I was almost to Dover but the audio was good. I noticed I had the zoom cranked up and that caused the blur while in flight. Some where around the 5:20 mark or the start of the second video clip I notice the problem, the zoom that is, and finally get it squared away. I hope you enjoy the audio/video and the photo's from our fun day! Check Out Robs Flying Adventures web page for more photo's and his write up. Part I is best for audio only, Part II picks up in flight west of Dover Delaware and has our landing into Wilmington captured. You can pick up Rob's radio work with ATC, he is flying Cessna 569er.

Mary and I were glad to be home. We were going to attend a Christmas party this evening but we both were beat. The Bride actually hit they hay around 8:30 and following my blog update I followed suit. My brother and his wife called, said they were out and about and thought of stopping in. I had to say the two old farts were headed up to bed. I haven't heard the last of this, I'm sure.

Great write up Gary! It was a lot of fun meeting up with you guys. Becky had a great time and I'm sure I can get here in the plane a little easier now.

hi Gary, saw your comment on my blog post about starting IFR training, thank you, I appreciate the advice! Came across your blog because of it and love the writeups, I'm now a subscriber. Best, Craig