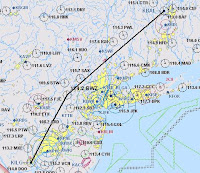 Today, Mary and I had planned on attending the BAC to BAF (Beech Aero Club to KBAF Airport) Fly-In. The wx was not looking good on either end this morning and since it was only a day trip I did not want to try and get there in the afternoon only to pack it up and head back tonight. The decision was made for a no-go. 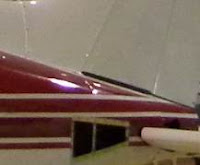 (Angels) and ran a few errands only to end up at Target or tarrrrrjaaaaa as i like to call it. We picked up prescriptions for the Bride and did some grocery shopping. Upon returning to the house and stashing all the goods my lovely Bride went into cooking mode. Mary's Aunt was in the hospital and now that she is home she wanted to bring over dinner to make things easier. A small turkey sacrificed itself along with dozens of potatoes and eggs. Potato salad, deviled eggs rolls for sandwiches and who knows what else. The place was smelling fantastic and 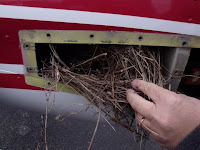 driving me bonkers since I couldn't have any. I decided it was time to go work on the plane.
I wanted to remove the access panels and check on the potential birds nest that was started until I plugged up the tail cone. I sent a text to Vince hoping he would want to help out and spend some time at the airport. He was at the gate waiting for me when I got there. We headed in and got to work. The place seemed pretty quiet as we fought the gusting wind while trying to get some work done. Vince took a few shots as we removed a load of nesting material, it was 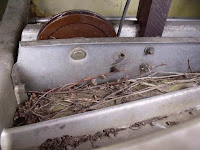 packed. I checked out as much as possible from the access panels and washed out the dirt and small seeds. The bottom of the plane has three drain holes located from the main wing spar to the tail, they were all open and draining. Vince secured the left side access hatch and the baggage compartment panel leading to the full view of the fuselage and control cables. The area was now clean and ready to button up.
The next task was to get some polishing 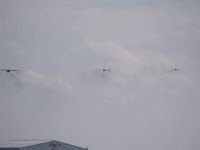 compound on the cowl and on all leading edges. I got a head start while Vince finished with the panels, then he followed up removing any remaining compound. I followed behind with a good application of wax on all he surfaces. As we finished up the tower started to come to life. A Lear departing two seven, a three ship formation of C-130's inbound for the ILS RWY 1 approach and another Lear in the pattern for 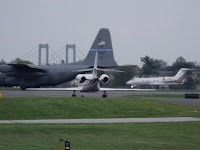 two seven. Oh, there was also a lone C172 taking off on three two and man did they get a ride in the gusting winds.
Always fun at the airport and it was nice to have some help today. I hope to get Vince some air time. I just gave him the King DVD's for the private pilot study.
Thanks Vince for all the great shots!!!
Posted by Gary at 3:12 PM