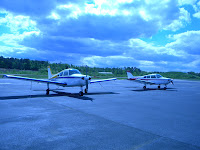 I'm not sure what went on with the camera other then it had some blue screen thing going on, obviously all day.

I happened to read about a Beech Aero Club (BAC) fly-in scheduled for this Saturday in Westfield, MA at the Barnes Municipal Airport. While checking out the attendee list I noticed our friends from Texas (Bo & Sandra) were in the air heading to the north east to join in the fun. They had quite a few stops planned as they swung east to lunch in Greenville, MS then overnight Gadsden, AL. Monday was lunch in Shelby, NC with an 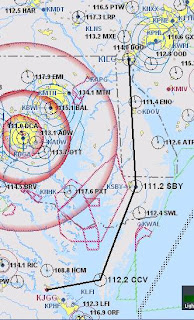 overnight in Edenton, NC. Tuesday a trip to the aviation mecca and lunch at Kitty Hawk followed by a short hop to Williamsburg, VA for dinner and a day of checking out the local attractions on Wednesday.

Ok, I think Mary and I could do Wednesday for a day trip to meet up as long as Bo & Sandra have some time available. I called Bo and we agreed to meet for lunch at Charly's inside the Williamsburg Jamestown Airport terminal. I would call prior to start up and advise of our ETA. The winds looked great for the trip south as I printed out the flight plan this morning. Mary and I made a stop for water and a box of fig newtons for the in flight snacks. Once at the plane we went through the pre-flight having a good laugh at my makeshift stabilator covers protecting us from the bird 'stuff'.

I made the call as planned and started 08Romeo for some warm up time. The sky was clear at Wilmington but I knew we would have some cloud layer to deal with heading south. We took off runway two seven to begin our day of fun. Once turning on a southerly course I could see the layer off in the distance south of Dover. I was cleared to change frequency with the tower and switched to Dover Approach. I always try to pick up flight following on our trips, it's an extra set of eyes and so much easier getting handed off to the next sector then having to look radio stuff up. Dover handed us off to Patuxent approach and I advised 4,500 climbing 6,500 when I checked in.

We rode along on top of the fluffy white carpet of clouds with short peeks of the ground below. I did manage to see Salisbury (KSBY) off my left side as I changed course for the next leg towards Cape Charles (CCV). We were listening to country music as we cruised along in smooth air enjoying the ride. Mary did comment how nice it was on top vs getting beat up under the layer, she is really starting to get this stuff. As we cruised south along the west edge of the the peninsula we could see clear sky ahead over the 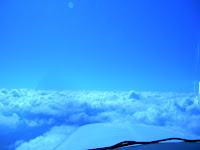 Chesapeake Bay and building clouds over the peninsula. I try to look ahead at 'what if' places to land if the need arises. One location was KMFV and it was covered by the layer along with a good many airports I would go to, if I had to. The top of the layer was between 5000 and 6000 with some building clouds dotting the 'white carpet'. Patuxent handed us off to Norfolk and they in turn handed us off to another sector. At this point we were maybe 10 miles north of Cape Charles VOR so I requested an altitude change to begin my descent into Williamsburg. Again, the bay was clear not a cloud in the sky but we had to get under the layer 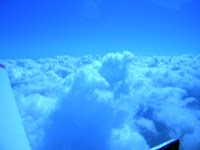 across the Chesapeake just west of Point Comfort. I reported the tops and turned west south west. It was a smooth let down and we ducked under the cloud layer with bases at 3,500-4,000 feet. I report the cloud base altitude to Approach as requested and continue towards the airport. Approach cancels flight following after advising no traffic in the area and thanked me for the reports. I switched the radio to the Williamsburg-Jamestown CTAF and announced my position and intentions.

I crossed midfield and entered a left down wind for runway three one. I had to slow it down and set approach flaps as we bounced a bit in the wind. I was keeping this one close as I added in a second notch of flaps and completed my base to final turn. I had to pull the power and slip a bit as I crossed the fence and added the last notch of flaps. I was a little fast and landed a bit flat with not much stall horn at all. We were on the ground and rolling out for the terminal.

Bo and Sandra were outside waving as we shut down. I parked next to our fellow Mouse and secured 08Romeo. It was so nice to see our friends! Of course it was hugs and handshakes around as the girls chatted and the men checked out 4Lima Bravo and 08Romeo. I ordered fuel when we taxied in and the truck was just about there to meet us. I wanted to top off to the slots to check fuel burn and our girl took on 14 gallons, not to shabby for a tick under 1.5 hours. 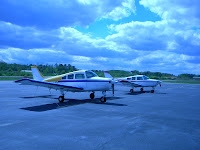 great lunch. Charly's always makes their own bread and all the food is very good. I think we each ordered the 'half & half' which is a half a sandwich and a cup of soup. I ordered the tuna salad on Bavarian bread with a cup of chili, Mary and Sandra had chicken salad on bavarian with seafood bisque and Bo had a chicken salad on white with clam chowder. It was fun to catch up on all the flying stuff and home front things too. Just to provide some background; Bo & Sandra were there when we purchased 08Romeo in Texas. They made our experience an absolute pleasure and honestly helped us have fun and not stress over the airplane deal and planned trip home. Somethings you can never repay, it's best to just pay it forward as we go. Mary and I can't thank Bo & Sandra enough for their transportation help, southern hospitality and friendship.

After we each had to roll ourselves outdoors we hung out and chatted enjoying the gorgeous wx on the patio located on the airfield side of the terminal. I can't believe three hours had passed! Mary and I figured we best hit the road and let our friends get back to the Williamsburg tours. We all walked out to the planes as I sumped my tanks and completed a walk around. I still want to take Bo's cowling from his plane and have the same set up on ours. Each side of his mouses engine room opens for inspection with two simple latches. A great feature that my plane doesn't have. I also want to add the oil filter on my next change coming up in just seven tach hours.

We climbed in and got our Sundowner started for the trip north. With our run up completed we taxied out to runway one three and announced our intentions. We were soon climbing out for Cape Charles. Norfolk Approach gave us flight following as we climbed for 7,500. Half way across the bay I turned direct Salisbury and held that course picking up following with Washington Center. The Garmin 496 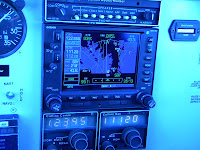 provides wx and traffic which is a great feature. Traffic sounded once for a real target as a turbo jet passed by our left wing overtaking us and heading into our next checkpoint. The Nexrad wx was showing winds aloft of 15-20 kts direct headwind going home at 6000 and 20+ at 9000. The cloud layer prevented me from 5,500 and 3,500 would have put us under the layer playing rodeo cowboy. I choose to plug along at 7,500 with the headwind allowing for a blistering ground speed of 99 kts (114 mph). Somehow that 128 kts (147 mph) from this morning just doesn't make me smile on the way home.

After Washington Center handed us off to Dover approach we picked up the Wilmington ATIS. Once just south of the C&D canal I canceled flight following and contacted Wilmington Tower for landing instructions. After reporting my position, altitude twice since I 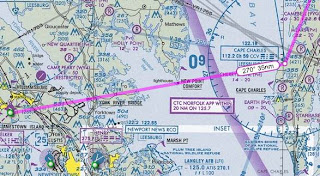 gave them 4,500 vs the correct 3,500 before they caught it, we were advised make left base for runway two seven. A smooth short landing clearing the runway at taxiway Mike. Mary and I secured 08Romeo for the night including the improvised special bird protection plan. We headed home to take care of the zoo and called it a day.

A special thanks to Ryan and Kathy for offering the use of their beautiful Benz. Mary and I can't say enough about the friends we made through flying. We stayed at the airport but the offer was very much appreciated. I hope to once again pay your kindness forward to other pilots coming into Wilmington.

When pics are Blue is usually your color balance. Looks like your not using "sunny" or "cloudy" for CB since the pics are in sunlight conditions.