Get The Oil Pumping


I decided on a short hop today in order to get some oil pumping in 08Romeo. I haven't been in the air for two weeks so needless to say I was going through withdrawals. Mary wanted to get some shopping done so she took a pass. I would have liked to shoot a few approaches but Mike is out of town. I called Vince to see if he wanted the open right seat and some stick time, he said I'll meet you at the plane. 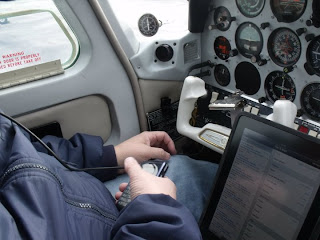 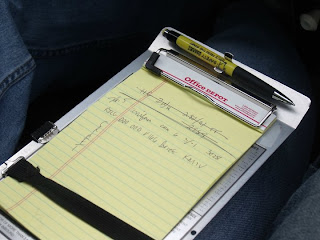 I rolled through the gate as AeroWays was finishing up with adding fuel to the slots on each tank (20 gallons a side). I uncovered 08Romeo and went through the preflight taking my time and giving her a good once over. The temps were around 38* and I should have plugged in last night but I was just to tired to make the round trip to/from the airport. The plan was to sit at low idle and watch the temps. Vince walked in the gate and was helping me finish up before we both climbed aboard. Preflight done, prestart checks complete, clear prop and 08Romeo comes to life. A quick check of the Cylinder Head Temps (CHT's) and they register just around 100* at start up, I should have checked before start. The Reiff heaters on my last flight had prestart CHT's at 205*. 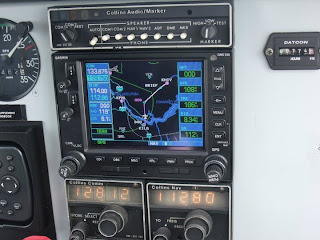 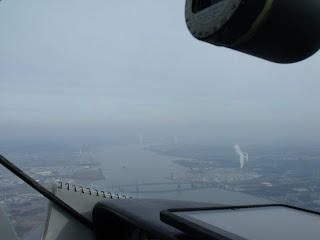 I made a call to Flight Service and filed to Millville. It was misty/haze and about four mile visibility, what the heck, use the new rating. The iPad is really nice when filing, it makes life easy. I read the info right down the list and was finished in short order. I did ask for an update on any TFR's since the Army-Navy game is in Philly. I got stung by the TFR last year even though I followed the rules for VFR and had a 'discreet' squawk code. I copied my clearance and advised ready to taxi. Runway two seven at intersection Mike, advise ready for release on ground frequency, I acknowledged.


For the non-flying readers....
Ok, that's cleared to Millville Airport (KMIV)
Runway Heading (RH - which was 270*) Radar Vectors (RV- approach gives directions) OOD (the Woodstown VOR in NJ), Victor Airway (V166 - the roadway in the sky), BRIEF ( an intersection).  2000 feet expect 3000 in ten minutes (assigned altitude), Philly departure on 119.75 (what frequency) and squawk 3353 (set on the transponder).
We were soon climbing out with a plan update of direct OOD, Woodstown. When I called Philly departure they immediately cleared me to three thousand feet. Vince took all the pictures today, he does a great job. It looked kind of strange glancing up river and seeing all the smoke stacks billowing straight plumes.  I guess mixed with the haze made for an interesting background. 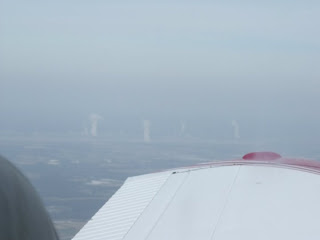 We landed in Millville after closing the instrument flight plan with Atlantic City but stayed on with them for advisories. I reported the field in site and they cut me loose VFR. There were a few planes in the area so I made the call for a straight in runway one four. A Cessna reported departing one zero so I made a slight turn and entered a left base for the same, always trying to play nice with others. A super squeaker of a landing, slow, stall horn moaning and you could hardly feel contact with mother earth. We taxied into a busy ramp and even busier Flight Line restaurant. 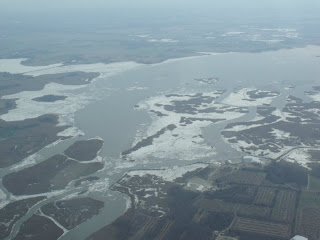 The place was packed but Vince and I managed to find a table. I had a soup and grilled cheese and Vince chowed down on a BLT.  He really cracked me up when he blurted out "I really don't like greenhouse tomatoes, no taste." I guess you had to be there. We finished up and paid the bill then made for the door.  With a quick walk around completed we climbed in and went through the check lists. 08Romeo came to life and we taxied out to runway one zero, 2nd in line behind a Gulfstream jet.  Once the runway was clear I taxied out and launched for home.

Vince flew a good bit of the way while I updated the VOR check that was thirty days to the day and now due. The one nice thing about the Collins Nav is that with a simple flip of the switch it gives you a to/from radial. The garmin 530 does the same thing, life is easy. It's best practice to also double check the CDI against the other. Easy to do, direct DQO VOR on the Garmin and get the heading then center Nav two with the same DQO VOR tuned to 114.0.  Both checks looked fine, 08Romeo is good for another 30 days. 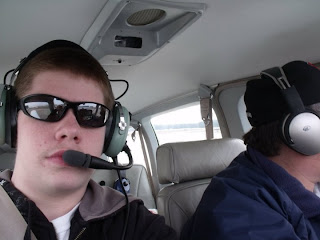 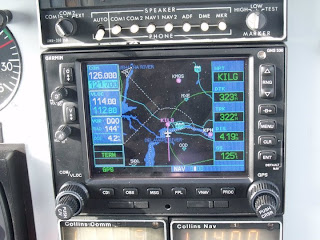 The Geronimo Twin that was on the ramp next to us at Millville and took off after us, passed us and landed ahead of us into Wilmington. I was number two to land and was asked to make some 'S' turns for spacing. I really had a sweet opportunity to switch to guns as we crossed the Delaware River looking midship of a tanker heading into Philly, would have been a nice shot, instead we have the photo shot. I landed long since I had another aircraft behind me landing and I was trying to help the tower folks. Over half the runway gone as I cruised a few feet off at just above stall speed to keep the horn quiet. Another squeaker, flaps retracted and a quick taxi to turn off at the end of three two.  I got a thanks from the tower. 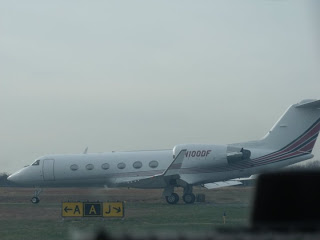 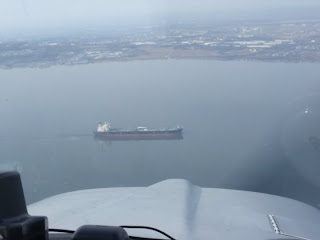 Overall a fun day! I wish I had more time to fly since the sky was looking better as we worked to secure and cover 08Romeo.
Posted by Gary at 4:28 PM

Fun day to fly! Wish you lived around these parts - I'd always be up for safety pilot duties.

Sitting on the ground for over a month really has me itching to get in the air...

Always looking for someone to fly!

I think it's been two weeks since I was up last and thats a stretch for me. I need to get night current and get some pictures of the updated landing taxi lights.

Good for you, Gary. Between weather and other responsibilities, my airplane has been sleeping in the hangar for a few weeks now. I definitely need to warm up the oil soon.