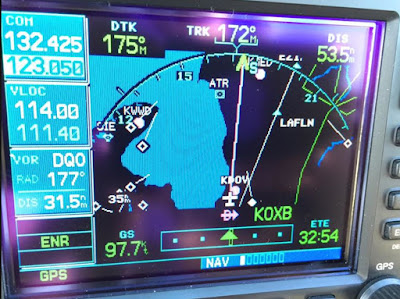 Today Mary and I ground pounded north to Red Eagle to pick up 08Romeo. Fresh off her ADS-B install and ready to fly once again, 08Romeo will stretch her wings as I take advantage of the new wx and traffic available.

Spot Potential Traffic Threats
The GDL 88 can receive ADS-B position reports directly from other aircraft in your vicinity. Because the FAA permits ADS-B broadcasts on 2 frequencies (978 UAT and 1090 ES), the GDL 88 contains both receivers so you can see a comprehensive view of all ADS-B “Out” equipped targets. ADS-B provides the ability to provide air-to-air datalinks with other aircraft. The GDL 88 is compatible with active traffic systems and prioritizes multiple traffic inputs, removing duplicate targets by choosing the highest integrity source available.

Load a simple route, as well as approaches, SIDs, STARs, routes with airways, and search and rescue patterns. ForeFlight Mobile also receives route changes made on the Garmin navigator, keeping your panel and iOS device in sync.

When I first got in the plane and fired up for the initial pairing of the iPad and FlightStream I had an issue. You have to physically switch to the AUX page on the 530 and pair the devices. With this first step completed the device list now displayed Garys iPad, I'm now connected. I had to try and push flight plans from the iPad to the 530, nothing. The iPad clearly showed I was connected to the Flightstrem in my settings bluetooth page. I shut down and went back inside the shop with the folks at Red Eagle to call Garmin.
Garmin wanted to make sure the firmware was correct and updated on the FlgihtStream 210 for v2.2. Ok, it's a new unit, I'm a bit confused. Apparently some of the first units were shipped without the updated firmware. In order to check this I needed Garmin Pilot...ahh, I don't use Garmin pilot.
﻿
﻿﻿﻿
I went back out to the plane to see if the pairing would display what version firmware was on the FS210. This time when I climbed aboard I had the iPad on. I fired up the avionics and it immediately paired with the iPad. I went to the flight plan page and the additional icon, a Bluetooth type symbol, was now in the tool bar.  Excellent! I clicked on it and a screen popped up asking if I wanted to "load from panel" or "send to panel". The flight plan I had for returning to OXB, V29 and all, was now on the 530 without having to chug and plug.

﻿
﻿
I worked through the message on the 530 asking to confirm the flight plan and tada!, it was ready to go. I went back in and confirmed everything looked good. I loaded up my Adlog with the updated W&B (-4lbs useful load), IFR cert and all the other additional stickies for the respective airframe and avionics logs. Mary and I climbed aboard and taxied out for departure. Once in the air I noticed I forgot to take my Zaon device, I'll have to make another trip north.
﻿
﻿

For the flight home I decided not to pick up my clearance and instead point direct Ocean City and once at altitude check out traffic and weather. I noticed that the traffic on my main Nav screen did not initially display altitude info but showed a boatload of traffic and the directional tails. Not knowingly when changing the viewing range I think the +/- altitude also showed up. I will have to investigate further.
The wx page loaded up but with clear blue skies not a thing showed up. I did not get the traffic to show up on my iPad but I think that is an iPad setting issue. I didn't want to be head down playing with that while flying home without a safety pilot. I'll work through the issue on the ground tomorrow. 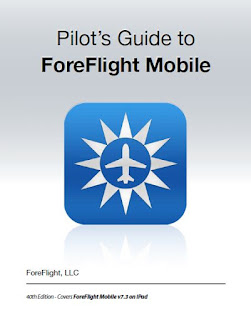 It was a lot of money for the ADS-B solution I selected. However, I have no wires or extra boxes to plug in, charge or carry to/from the plane. In my opinion I have increased the value and usability of the Garmin 530 making changes on the go very simple for single pilot IFR operations.  For this evening I'll be reading the 236 page Pilots Guide to Foreflight Mobile.  I hope to have better pictures and PIREP after a second flight tomorrow.
Posted by Gary at 10:30 PM

I just had the same setup installed and connected to my 530W. I love it! I had no connection issues on my first flight, but did on my second.

What I noticed was I could not transfer flight plans either way. The option wasn't showing up even though everything showed on and connected. It was obviously talking since it was accurately displaying my GPS position on my taxi diagram in FF.

I fully closed the FF app and reopened it. Then it fully worked. Must just be a bug.

Holy cow the amount of traffic!

Geoff, Love the info on the 530W. I didn't get the traffic altitudes on the first nav screen until I changed the range. I also had to go into foreflight and switch off distant traffic, way to much commercial traffic.

I'm looking forward to Sunday's test flight on a dog rescue mission. I should get some good pics and work out any issues.

you are truly a just right webmaster. The web site loading speed is amazing.
It kind of feels that you are doing any unique trick.
In addition, The contents are masterwork. you have done a fantastic job in this matter!


Thanks for the comments. I had to reload a few pictures since photo bucket doesn't seem to work. The ADS-B has been great, and with Foreflight it has made single pilot IFR much easier for changes on the go.

This article gives clear idea designed for the new people
of blogging, that really how to do running a blog.