As previously noted on the Possible Rescue Flight post we wanted to fly this mission if all the puzzle pieces fell into place.  Well, Mid-Atlantic English Springer Spaniel Rescue (MAESSR) did a great job getting the drop off moved to Wilmington's airport (KILG) and the new family was thrilled to meet us at Charleston, WV - KCRW.
We started out very early having to take care of our zoo then get to the airport.  I had watched the weather and it was looking fantastic for Lucy's flight. 08Romeo had her engine and cylinder preheats turned on last night so she would be toasty and ready to go once we opened the hangar door. 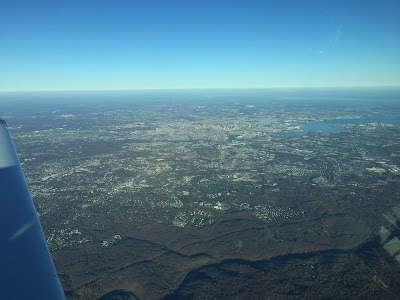 Mary and I were back to the well oiled machine. The Cabrio was backed out, the plane unplugged and pre-flighted then tugged clear of the hangar. I already had fifty gallons on board from a few nights ago, so we were ready to go.

I picked up my clearance with Potomac C&D, made my notes and launched. Cleared as filed with a fly heading 270* on departure so Potomac can ID me then turn us loose.  It was a smooth flight even with headwinds this morning, arriving at ILG just before 9am. 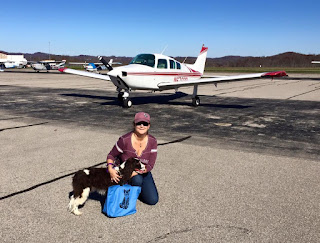 I took on ten gallons to bring me back to fifty total for the next leg. Mary and Eva made sure Lucy was ready and then we loaded up. Thanks Eva for getting Lucy to us at Wilmington!! I lifted Lucy up and set her on the wing, she climbed right behind the left seat and checked out the back of the plane. We had a moving blanket and a soft blanket on top of that in place of the rear seats and baggage area so she could get comfy.

I picked up my clearance with Wilmington ground then taxied for runway one. After start up Lucy wedged herself behind my seat against the wing spar, it was a tight fit but I guess she felt safe there. After take off I usually move my seat back a notch or two but today it was locked in place so our passenger was happy. 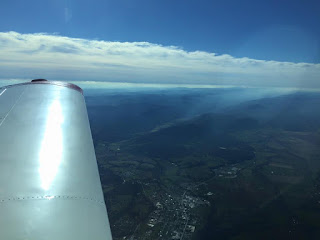 The flight was smooth at six thousand as we passed north of Baltimore and remained just south of Camp David airspace. Approach was great getting us direct Charleston as soon as possible, it helps to note dog rescue flight when you file. I was told to expect runway five for landing but at the last minute approach cleared me for runway two three, very odd. I was handed off to the tower and when I checked in with Sundowner 6708Romeo visual two-three, I was instructed to land once again on five. I entered a right base and was high on final but made a nice landing. 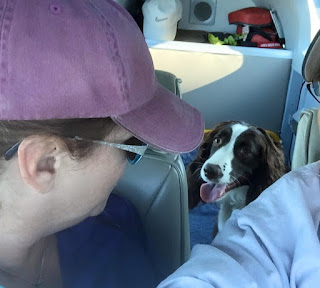 As soon as we landed Lucy popped out from behind my seat and jumped in Mary's lap, she was ready to get out, now.  Ok, I'm still rolling out and looking for the taxiway I was instructed to turn on and Lucy wanted to take the controls. Ah, no darlin' get back. Mary did a great job holding Lucy back as we made our way to the General Aviation Terminal. We had to plan getting out of the plane so Lucy girl didn't go first. 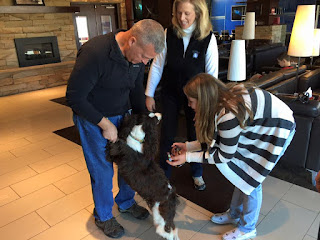 Once we shut down and things got quiet Lucy settled in and let me get out first so I could help her off the wing. The three of us walked in the terminal and were greeted by Lucy's new family. Diane, Jerry and their daughter Caroline each had that big smile on, and that made the rescue flight worth it for us. Lucy took to Caroline immediately and that just makes your heart melt. 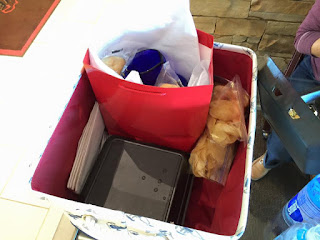 Mary and I have done a few of these rescue flights and this was a first for us today. The family presented us with a huge picnic basket filled with great sandwich lunch goodies, local jams and preserves and a beautiful Rectangular Cobalt Blue Glass Water Bottle handcrafted locally that Mary and I will cherish forever. 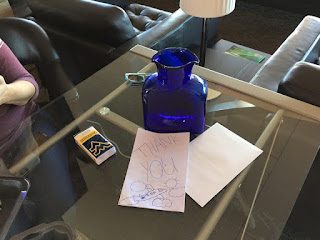 The collector piece has already found its home with Marys collection of cake plates and collector pottery from various locations. It looks beautiful with the LED lights above our kitchen cabinets giving it a very soft glow. We can not thank you enough for your much appreciated gifts.

We said our goodbyes with handshakes and hugs and watched Lucy trot off with her new forever family....it felt right. Mary and I turned to each other and both said Lucy is a very lucky girl.

I settled up my fuel bill and then filed my flight plan home. I had given thought to heading south towards Richmond then swinging up the Delmarva peninsula home. Instead I would follow the route we took home from Mt. Sterling Kentucky and decided to file for Baltimore then home. 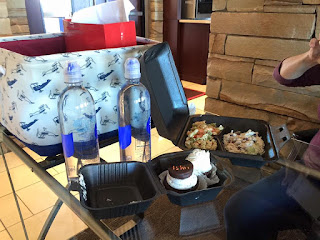 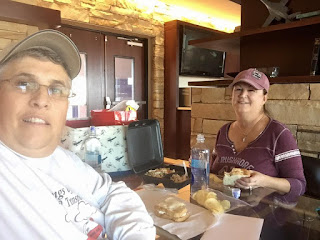 We tossed around some ideas for a place to stop and eat then decided to dig into the beautiful basket and just relax at the FBO and have a sandwich and cold drink. This would save us time and get us home before the magical one hour after sunset so we didn't turn into mice (I'm not night current). 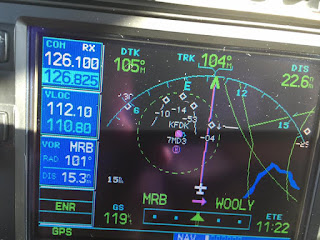 Charleston was very easy to work with and we made the loooong taxi for runway five. After watching a regional jet and a Dash-8 land I was cleared to take off. 08Romeo climbed out steady to seven thousand and that's where we road along with approach. We were handed off to multiple approach controls as we enjoyed the view and smooth ride with tail winds. 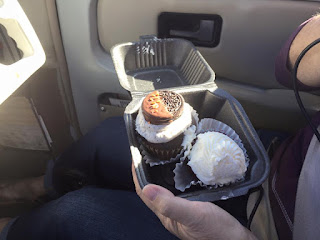 Somewhere along the way we dug out the awesome cupcakes that were in the basket, they were really good.  Thankfully approach didn't bother me while we indulged.
﻿ 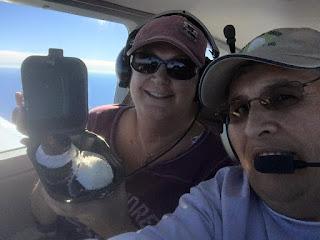 We made our way to Baltimore, just south of the city and directly over the airport. We watched a few jumbo jets climb out, they were huge, it was like flying over Dover with the C5's. We crossed the bay just north of the twin bridges on RT50 north east of Annapolis, we were almost home. It was amazing to watch the ADS-B light up with traffic as we passed busy airports, it was like watching bees around a hive.

Finally we had Ocean city in view and I was gradually stepped down by approach.  I eventually canceled IFR about ten west and switched over to CTAF to make my position calls. I had to slip to loose altitude and really chop the power to make runway one-four.  Not my best approach but a nice landing made it feel better.

We are home and 08Romeo is fueled and ready to fly to annual bright and early tomorrow morning. 7.6 hours flying today, I'm beat.
Posted by Gary at 8:21 PM

I love a story with such a happy ending. You really did put in a long long day. I'm assuming that by the magical number you mean you mean you can fly one hour after sunset. It's amazing to see Baltimore and those areas in your pictures. Don't recognize anything. lol

Rescue flights are the best - well done. Definitely one of those things on my I'll-do-it-way-more-often-when-I-own-a-plane-someday list.

Glad to see the ADS-B is working out so well so far, too. As a renter, don't think I'll be seeing too much of that myself in the near-term.

Sandie, you are correct. Official 'dark' one hour after sunset. I don't like driving at night and I really don't like flying at night. So, I haven't kept current for night flying.

The view was beautiful over the Ridge-and-Valley Appalachians. It's a shame but the peak leaf color had already passed.

Steve, You have done the flights and you know it never gets old. It was a long day flying and then having to get up Monday morning to fly for my annual. After crawling around on the concrete floor I drove home in a tiny rental (clown car) for just over 2 hours.

Tomorrow I drive north, work on the plane then drive home...I'll be glad when 08Romeo is home in her hangar.