﻿The fourth of July is upon us and the weather is looking pretty good early in the pre-holiday week. Mary and I plan to head north to Wilmington, KILG and pick up our friend JoAnn.  I should mention here that my mission also included a stop at Red Eagle avionics to have my Collins radio pulled and sent to Stellar for a fix. So, I get to fly and it saves her from the log jam of cars on I95 and SR1.  With a plan in mind I put in for a personal day at work for Friday, actually enjoying the chance to sleep in. 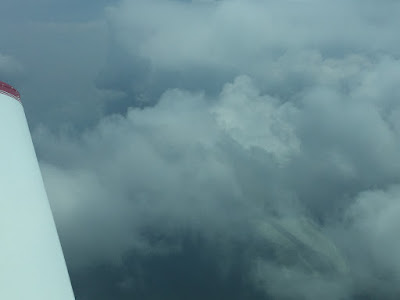 As they say, all good plans... well today was no different. The forecast is now calling for thunderstorms moving through both locations in the afternoon and I do not tangle with boomers. Jo got off work around 11:30 and she was a half hour drive to the Wilmington airport, that will work. Mary and I launched from Ocean City around 10:30 and climbed through a layer leaving the beach. I was on top most of the way at five thousand knowing I was going to be shooting the ILS RWY 1 approach into Wilmington. 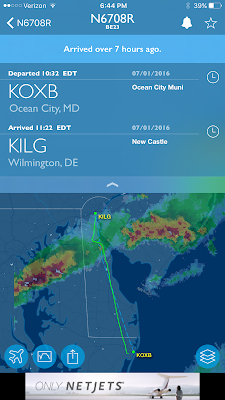 Philly vectored me for potential wake turbulence and had me cross the localizer and rejoin from the west side. I like the radio work and we didn't mind because the ride was smooth. Once established I flew the needles, breaking out around 1200 feet and had the runway clearly in view. I cleared the runway and taxied to Red Eagle to make my radio drop and await Jo's arrival. 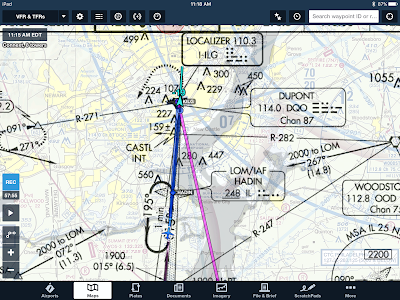 We didn't waste anytime loading her bags and getting aboard. Jo knows the routine, she has flown with us many times. Today was a surprise, I picked up a new to me passenger headset on ebay and she really liked the Bose X. I filed for the reverse route to get home KILG ENO KOXB. We were cleared for take off and on the roll runway one-nine. Once handed off to Philly they gave me a climb and direct ENO. The weather had cleared with some broken to scattered cloud cover lingering. Philly handed me off to Dover and we road along, it was quiet. Well, quiet in the plane thanks to isolate and ATC seemed quite. ADS-B was slow showing weather but the xm was painting an ugly picture of Ocean City.
﻿
﻿

Time for a change of plans. Once south of Dover I made the decision to divert to Georgetown-Delaware Coastal, KGED. Georgetown was still flying the VFR flag on my XM weather and picking up their AWOS confirmed. I advised Dover that I was going to divert to Delaware coastal and they turned me direct. I heard another aircraft request the visual for runway two-two at GED, so I followed number two for the field.﻿﻿
﻿
Once we shut down it was decided that we would have a quick lite lunch and then make the ten minute hop home. When we walked into the terminal I ordered fuel to bring me to forty gallons and let the desk know we were going to grab some lunch. There was a blast of noise coming from the restaurant, it was tournament baseball time and the place was crawling with ten and under ball players.
﻿
YIKES!! We could not hear ourselves talk and there was only one waitress on, poor girl. She did take our drink order and eventually she made it back to our table, I immediately asked for the check. The three of us asked if she was ok and told her just relax don't let the parents upset you, there won't ever be a worse day than this. She forced a smile but had tears in her eyes. She came back and said there is no charge since we had to wait, in unison the three of us said no. The young lady insisted so we each gave her a ten dollar tip and told her hang in there. It was the least we could do, she needed to know people do care. 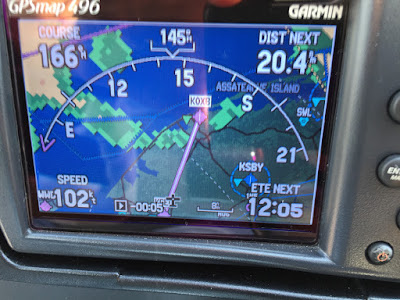 With that fiasco behind us I settled up my fuel bill and headed out to the plane. After a quick check and sump we boarded for home, or so we thought. Ocean city is reporting MVFR and it was VFR here on departure. We climbed out and pointed 08Romeo to the beach. This is where I really missed my second comm radio. I had to flip flop between monitoring Patuxent approach and CTAF at Ocean city. Finally switching to CTAF I made my position call, ten to the north inbound full stop runway one-four. I heard a pilot respond that he tried to get in three times and finally landed on two-zero. I thanked him for the heads up and then flipped back to Approach to request a pop up.
﻿
I wasn't the only one looking  for a way in, another plane was just given the GPS RWY 14 at two thousand and I was now directed to hold as published at three thousand. I have to say that we were all in the clear, there was a fog bank sitting over the coast slowly moving, giving us peaks of the ocean from the hold, mother nature teasing us and soon trying us. The other aircraft was now inbound and I was getting ready to turn another lap. Approach lost radar contact once the preceding plane started their descent. I advised I had him inbound LANDY on ADS-B, the controller thanked me. Shortly after the pilot cancelled IFR he had the field in sight. I was now crossing PFAIR and turned loose for my shot at the approach. 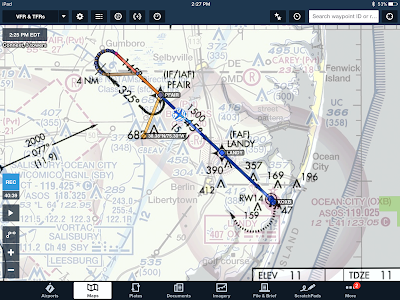 Mind you the other pilot was maybe three or four miles ahead of me so I figured I had a good shot at getting in. We were on our way in the clear but looking at this fog cover. I cross LANDY at 1500 and descend for the MDA of 700'. I give a quick review of the missed one more time as I am calling out the altitude, eleven looking for seven, nine looking for seven. Level at seven...looking...looking...ugh, nothing but a solid layer under me, going missed. I advise approach going missed and they have me climb to three thousand and report PFAIR on the published hold.  I'm thinking there is no way I'm getting in on GPS RWY 14, I need the GPS 32 LPV approach. 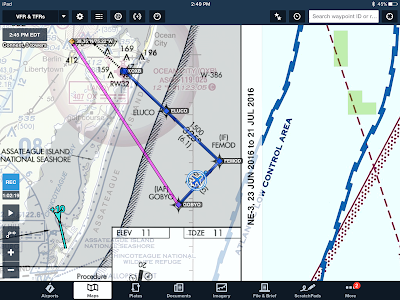 Approach Sundowner 08Romeo request. Patuxent answers and I ask for the GPS RWY 32 approach. Pax turns me direct GOBYO and we are on our way once again for another try. It seems like forever heading to this initial approach fix, to long, as my mind starts running scenarios. I'm thinking I got two strikes, couldn't get in MVFR, could not even see the airport on the GPS 14 approach and now heading out over the ocean six miles at low altitude. It was one of those moments you want to shake your head like a dog shedding water...then the recent Cirrus incident in Houston popped into my head.

Fly the damn plane Gary, fly this approach! The quiet is broken by a TBM pilot saying the previous pilot has the right idea we'll take the GPS 32 approach also. Great, a turbo prop in tow, he's wide right of me to my south and slowing down to follow in line, number two for the airport. As I get ready to cross the beach, which I can't see, I hear another pilot requesting the GPS 32 and he's flying a Cessna 510. I think to myself, well boys sorry about your luck but I'm number one and I'm doing 93 knots. 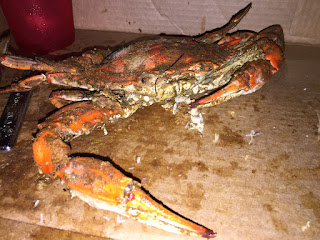 As I cross GOBYO headed for FEMOD the winds really give me a push and that easy going ninety knots with time to think is now 130 knots. Once established I was cleared for two thousand so I was descending at a gentle rate keeping things smooth. Mary and Jo were very quiet giving me a sterile cockpit, it was much appreciated and needed. Approach advised the C510 that as soon as the King Air cancels he'll advise.  King air?  I got a good laugh out of that and it broke the tension a bit. I was now turning inbound for ELUCO and descending to 1500. Airspeed under control now dealing with the crosswinds. Needles looking great this will be my best shot to get in and I can descend to 261'. I cross ELUCO and descend for 261', less than four miles out and no beach in sight. I catch a glimpse of the outer shore line, I'm real close. Altitude at 300' creeping down to 280', I see water. On glide, now chasing the needle for on course and breaking out. Runway in view but I'm off to the side. I add in two notches of flaps, adjust my power, make a gentle S turn and align myself as I cross over the beach and then the runway. I add the last notch of flaps and float a bit setting 08Romeo down and turning off at the second taxiway. I am soaked in sweat. I call clear and try to cancel with approach but no answer. The TBM relays as I switch to the Patuxent C&D frequency I was given to cancel on the ground. As I turn on the parallel taxiway Pax acknowledged my IFR cancellation. 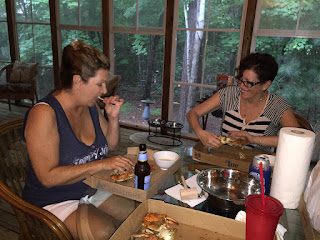 Once shut down I sat and cooled off, downing some of that raspberry ice tea from Georgetown. The TBM lands and clears and within a few minutes the Cessna 510 lands. My two Hangar neighbors asked how bad was it, I said as you can see I'm soaked and that was the lowest minimums I ever had to shoot. I'm going to pick up our crabs, go home, and have me some grapefruit crushes.
On the way out the gate I pulled up to the Cessna 510. I saw the pilot getting some bags out for his two passengers. I had to let him know I was flying a Beech Sundowner and not a King Air, he cracked up laughing. He said good call on the GPS 32 and thanks for keeping the speed up, I said I was peddling as fast as I could. 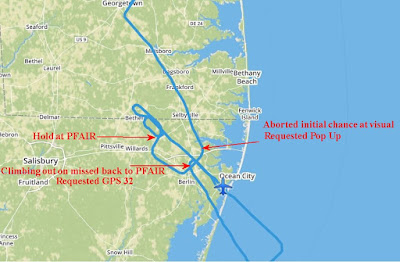 Great write up, Gary!
I was like I was right there with you.
Great job flying the airplane! Sounds like it was an interesting and challenging flight.

What Adam said...great write up and well done! I have to imagine that your recent practice with Bob had to have helped give you some added confidence as you flew these approaches.

Adam,
Thanks! I try to note each part of my flights. Sometimes I think it repetitious but worth repeating and pilots get it. It was a real test and I felt good...I felt even better shut down in front of the hangar. :)

Chris,
Thanks! I think we're on the same page when it comes to current vs proficient. Indeed, those six approaches with Bob gave me that added boost of confidence I needed to believe I'm still able to do this pilot stuff. )