A mission was quickly hatched following a few text messages being swapped Wednesday evening.  Chet K needed to pick up his Piper Warrior at Farmingdale, NY  (KFRG), he had some maintenance work done. I was on board with the mission. I just needed to refuel 08Romeo since she was holding only around thirty gallons after our return from Texas.

I went to the airport Thursday and brought the total on board to 54 gallons. Flight planning was showing a nine knot headwind and just over one hour and thirty-five minutes flight time. With my pre-flight complete I tucked 08Romeo in with the pre-heats plugged in and both moving blankets covering her cowl, all nice and toasty. Temps for Friday morning were going to dip so I wanted to make sure we were ready to launch at our scheduled go time of 8am. 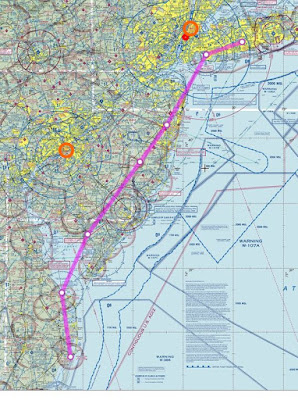 Chet walked up to the plane as I was hooking up my video cameras. After reviewing our plan, I got the fan turning and taxied out to runway three-two. With my run up completed I tried to contact Potomac Clearance Delivery, no luck. Since it was Visual Flight Rules (VFR) I launched and picked up with Dover Approach Instead.  There was one change to the initial flight plan, the addition of one more fix north of JFK, the KEEPM intersection. Dover did vector me for faster traffic along Victor 1, I was turned back on course after they passed. 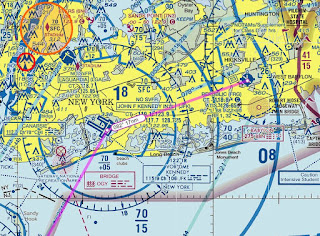 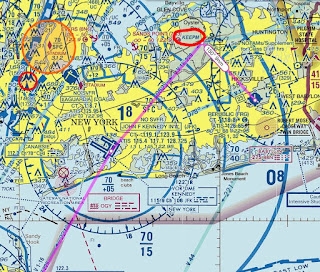 Easy peasy...we road along above the layer of clouds surfing through the tops. Well, at least until McGuire Approach had us descend to five thousand.

We crossed at Sandy Hook Point and unlike the last flight to FRG and turning along to follow the East Atlantic Beach shore, this time we flew to JFK and were given vectors for the visual runway three-two. Check out the flight path. 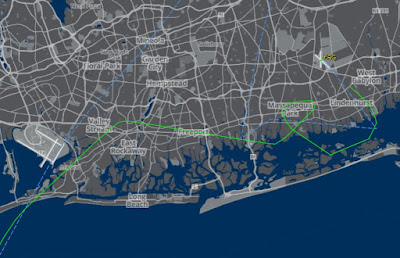 Along the way leaning forward to try and find Republic I somehow pushed on the yoke and descended below my assigned altitude.  I instantly pulled back to get back to the correct altitude but NY Approach was just as quick on the mic to scold me. I took my comeuppance like a big boy and continued on rock solid from there. Winds were gusty while landing but I rolled 08Romeo on and taxied for the Echo Ramp. 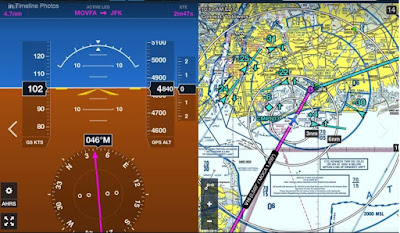 I was quickly greeted by the airport security team. They wanted to know my name, address, tail number, phone number, and how long I was going to be on the ramp.  I responded, long enough to get fuel and head south for home.

I ordered fuel to bring 08Romeo back to forty gallons on board for the flight home. Chet was busy trying to get his plane started, it needed a jump, since his mechanic left the master on. I sat in my plane to keep out of the wind until the fuel truck pulled up. I was ready to go but it took maybe thirty to forty minutes to get Warrior charged for a start. My phone rang and it was Chet, he was ready to roll. Excellent!

I picked up my clearance with Republic ground after I did my run up, in place, on the ramp. I followed my instructions and taxied via Alpha, cross runway one-one nine, hold short runway three-two. I was sitting number three for departure. One plane lands then one departs, it went quickly. Once Chet was given a line up and wait, I contacted the tower for my release. As Chet climbed out another aircraft landed, then I was given the line up and wait.

I soon launched and followed the Farmingdale Five departure. At four hundred feet turn to a 010 heading and climb to three thousand for radar vectors to JFK. I was climbing like a home sick angel, as Bo Boggs used to say, and still got the 'give me your best rate of climb" from approach. Ok, this is a Sundower and 1200 fpm is pretty good, I thought, but didn't comment. 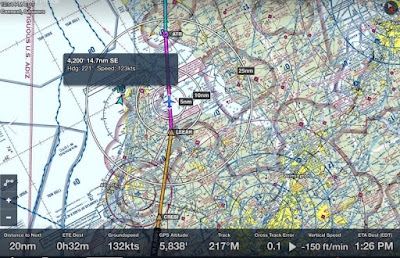 Finally, I was  turned on course to JFK and followed my flight plan as filed, enjoying the scenery. Multiple NY approaches, then back to McGuire and then Atlantic city. As I crossed the Delaware Bay I cancelled IFR with Dover and descended to four thousand five hundred feet. Chet was following the beach I was still inland.

Chet landed first and I fell in line behind a school plane just ahead of me. Another good landing to end todays mission, it was fun.  I fueled up for tomorrows flight to Wilmington and then met Chet for a late lunch at the Green Turtle.

What was the story behind the interrogation from security? That seems unusual.

No idea. I didn't have a security badge and I parked near the abandoned fuel island, that's my only claim to fame. They were very friendly and they were checking out everything that taxied in.

Not everybody buys this baby face, I'm a good guy look. :)

Fair enough, Gary. When I hear about things like this, I always wonder what triggered them.

Sorry to hear that your buddy's mechanic left the master on! I'm sure that was a buzzkill to discover.