While reading through the many forums I frequent, I came across an excellent what if scenario. The pilot is a friend of mine and I always appreciate his insight to flying/teaching moments. I thought I would share.

I was taking advantage of a rare chance to get in some actual today in Central Texas today. I did an IFR flight from KEDC (Austin Exec) to KLHB (Hearne). It wasn't a ton of actual but it was bumpy enough to work at it so I hand flew the approaches.

An interesting IFR question came out of this though. My approach clearance to the KLHB RNAV Rwy 18 approach was issued about 5 nm from CORAB. 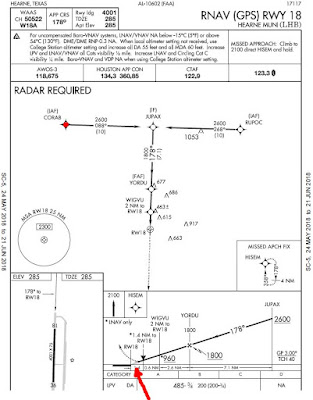 I think this was the intent but I can't seem to find anything online on this. In this case I just flew the approach as published (it wasn't a challenge to loose 800 feet in 17 miles).

BTW - bonus point question. Looking at that plate - what does the grey shading between the VDP and the runway threshold mean.


Once cleared for the RNAV 18 approach, like my friend, I would have stayed at 2600', flying the approach per the plate from there.

I watched a similar scenario unfold on a video of an aircraft given the "at or above" which the crew followed and triggered a terrain alert. I will continue to follow the approach plates unless breaking out and flying the remainder of the approach VFR.

By the way, I got the bonus question, ok partial credit because I took a shot.  I knew what it had to deal with but wasn't 100% positive until looking it up after the fact.
Posted by Gary at 4:22 PM