With nothing on our schedule Mary and I decided we would finally get her some right seat time.  Mary hasn't flown in our 'new to us' plane. She has sat in it, but that's it.  Today we were determined to change that.

We gave some thought to heading to Summit-KEVY to catch up with my brother and sister-in-law but they have a busy day planned as they get ready to head to Yellowstone.  I can't wait to hear about their trip. We called Mary's brother to see if they had their grandson with them today. They did not, schools out and since Amy is a teacher she is home for the summer.

Hmmm...Maybe Williamsburg, nah, we're headed there with the Beech Aero Club in July. We gave some thought to Wilkes-Barre, Pennsylvania - KAVP so we could visit my parents grave and get some mulch down and flowers planted, but it was too late of a start.

We finally decided on Cape May, NJ.  We called the FBO to confirm a rental car is available, and it was. The last time there we took a taxi and he hit us up for thirty bucks each way to Mammas Junk Company, that's a ten mile hop each direction. Today we rented and had our choice of where to go and how long to stay. 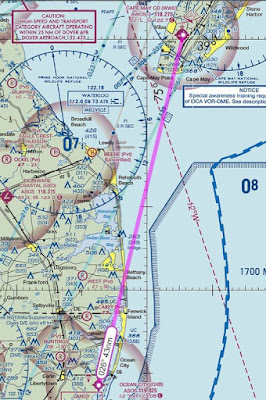 ﻿
We climbed out of ocean city and turned on course for Cape May. Mary was following the check list and thankfully reminded me to switch the gear up. I'm not sure why I don't do that, I notice the difference in the numbers as I climb out and then retract the gear. Very bizarre. The remainder of the flight went smoothly and we were soon letting down for runway one at Cape May. We taxied to Flight Level Aviation and ordered fuel to top off. Once the plane was secure we jumped in our ride and hit the highway.﻿

Of course we headed to Mamas Junk Company first, but they were closed.  Mary was not a happy girl. No problem, point the little blue Kia rental towards Cape May and off we went, down the Garden State Parkway. We passed by one of our favorite restaurants, The Oyster Bay, confirming they open at 5pm. We will be headed back one evening for dinner. This makes for a great date night.

It was just a block or two to the Washington Street Mall and we quickly found parking in the lot next to the grocery store, across from the church, and it only ended up costing us three dollars. 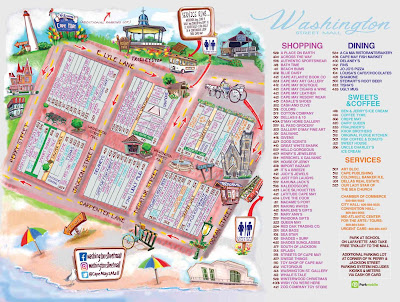 We strolled along enjoying the gorgeous weather. The temps were perfect and there was a nice cool breeze to keep things comfortable. We decided on a lunch stop at Delaney's Pub.

Mary and I each ordered a lobster roll, and it was perfect.  Not all that mayo and extra stuff packed in, just plenty of lump lobster in a perfect seasoning and served with really hot melted butter. It was fantastic!  I washed it down with a sweet tea, that was more watered than sweet or tea. Mary had The BOG: Cranberry Shandy by Cape May Brewing Company.

The BOG: Cranberry Shandy - A tart, cranberry wheat beer blended with lemonade to create an uber-drinkable summer shandy. Perfect to enjoy on those sweltering days, this beer is light and refreshing while still packing tons of flavor.

We walked off lunch for a short while then decided to head back to the airport. Mary wanted to make a quick stop at the Cape May Brewing Company, along the main entrance to the airport.

With our cargo loaded, one 64oz growler of The Bog, we were ready to climb aboard.

45Yankee had plenty of time to cool so I did the normal start procedure. I had no issue and we were soon on our way to runway one for departure. With the run up complete we rolled out on runway one and launched for home. This time I did not move my hand above the throttle quadrant with out tapping the brakes and retracting the gear. I ran 45Yankee pretty much as I have been, 20MP/24RPM and with the slight tail wind watched speeds of 150 knots.

I crossed the Delaware Bay and climbed above a layer blocking my path, topping out just around six thousand feet. My plan was to hop over the layer and let down for OXB. As I crossed the layer I checked my location and I was already just ten miles north-east of the airport. Crap! I didn't want to shock cool so I pulled power and adjusted my approach towards runway one-four. 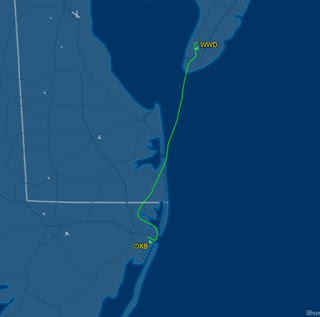 The original plan was to enter a left base maybe three miles out from the runway and turn final, not happening.  I was too fast and high so I pointed towards the beach and entered a normal left down wind for one-four. Once at recommended gear speed I lowered the gear, providing some anchors to help slow down.

The winds provided some crosswind action and I really wanted to test my skills. I stuck with runway one-four instead of switching to runway 2, and planted the left main into the wind and rolled 45Yankee on the runway. I was very pleased.

Next up Tullahoma, Tennessee!
Posted by Gary at 4:06 PM

Congratulations to you both on Mary's inaugural flight!

Thanks! Beech Aero Club board of directors meeting followed by a luncheon and then a look at the clubs Musketeer we purchased and had placed on display.

We went to Cape May for fathers day. My daughter was already there so we didn't need a car, but I am curious what they charge, and what is the availability.

Can't beat the FBO fees at Cape May ($0). I kind of like Ocean City, NJ better because we can walk to the boardwalk, but it is $10 to park.

I hope you and your wife are doing ok, though I have no way of finding out other than asking here. I called the medical center you were sent to and they could only tell me that you were discharged.