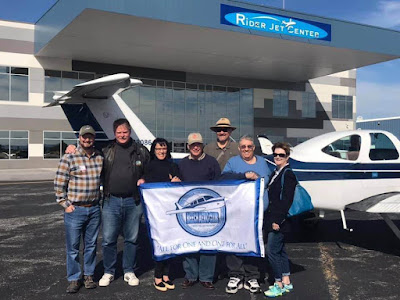 The Beech Aero Club (BAC) scheduled a fly-in to the Hagerstown Regional Airport (KHGR) located in, Hagerstown, MD.  The event start time was set for noon, meeting up at the Rider Jet Center and dining at The Grille at Runways. 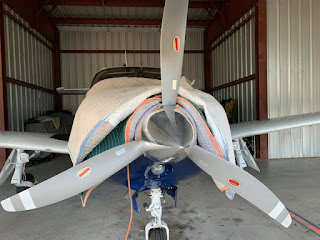 Mary and I decided to attend the event so I fueled  3 Tango Charlie on Friday and completed my pre-flight. All that was left was to sump tanks this morning. I even decided to give the new Reiff preheats a test just in case the temps dipped overnight.

It was a beautiful day to fly, with temps in the low fifties when we arrived at the hangar. I completed the sump and tugged the plane out on the ramp, yes I did turn on the preheats for two hours before arriving at the airport. 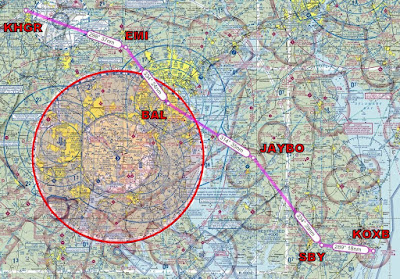 Mary and I climbed aboard and got settled, it's only my brides second trip in our new to us Commander. With video equipment set and getting my knee board strapped on I was ready. I taxied for runway three-two to complete my run up and pick up my IFR clearence for the flight. Why file, because it makes the Baltimore transition easy peasy.

We took off just after 10:15 and pointed west for the Salisbury VOR. I soon received an amended route, direct Baltimore. Mary and I enjoyed the view as we made our way to cross the Chesapeake Bay. We had a clear view of the Bay Bridges and could not believe the number of sail and motor boats out on the water. 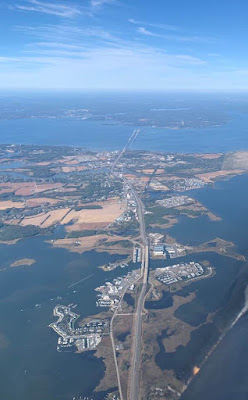 Once handed off to the next sector, approach  once again amended my route, this time adding direct HAIGS intersetion.  This change would put me on the north side of the Camp David (P40 R-4009) restricted area. 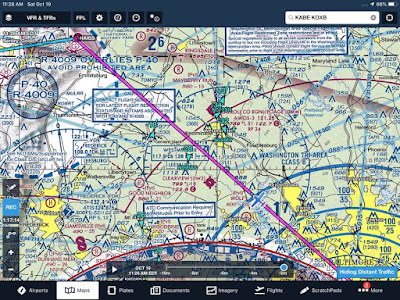 We cruised along checking out all the beautiful colors of our impromptu leaf peep. The drone of ATC interupted our conversations but we were enjoying the fly time together. At one point ATC asked if we were still on frequency. Mary and I looked at each other as I responded we are still riding along with you. He replied he hadn't called me in awhile and was just checking. We both had a good laugh at that one. 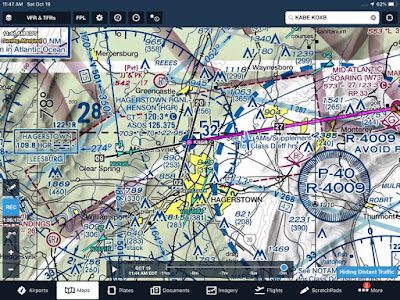 I was stepped down just passing HAIGS and had one ridge line left to cross for the airport. Once handed off to the tower I could hear some of the other BAC members making their calls and heading in to land. I think we were landing in between Les in his Sundowner 08Lima, then a Cessna followed by Alan in his Sundowner.
I made a nice landing and taxied for the Jet center. I followed the Cessna to the ramp who was following the "Follow Me" golf cart. I was then picked up by a lineman and marshaled in to park, or so I thought. This youngster needed some training in marshaling aircraft. He initially lined me up to park at an angle right next to a twin engine aircraft, seems easy enough. But, as I made my turn, he turned. Now pilots look to line up on the the line guy. point your plane at him and you're good, he changed the line up. We then did this hand signal dance and Mary and I decided he wanted me to go around, yes, a missed parking of sorts. I was a bit frustrated.  Off we go as I made another loop around the ramp and once again lined up and parked. Go figure, I was in the exact same spot I had originally stopped. OMG!! 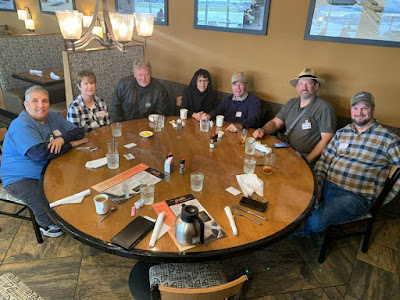 We gathered for lunch at the Grille, enjoying good conversation with excellent food and service. Mary and I each had a burger and kettle chips. Mary had blue cheese, bacon, and onion. I had bacon, mushrooms, cheddar and some of her onions. Both burgers were cooked perfectly, and both very tasty. 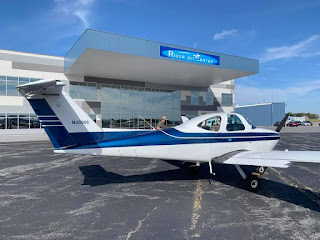 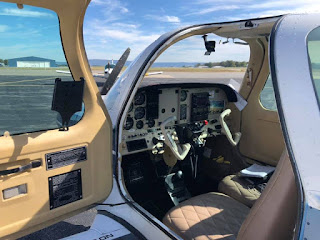 Following lunch we met out front and took a group shot in front of Bob's immaculate Skipper. What a nice plane, and what a loaded panel. 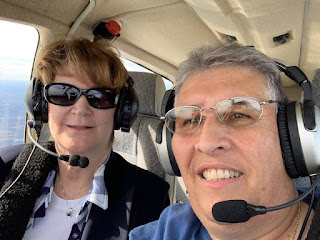 Mary and I said our goodbyes and saddled up for home. I got the fan turning on the first start and let the oil warm up while I entered my flight plan. The route I filed, a reverse of what I filed this morning, is not what I was cleared for on the return home. 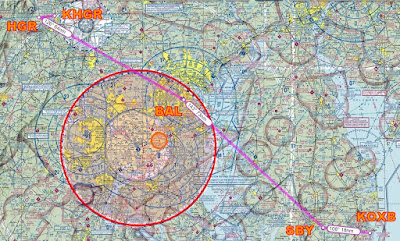 KHGR-HGR-BAL-SBY-KOXB at 7000
I would have to back track to the Hagerstown VOR then turn for Baltimore. We launched off runway two-seven while the rest of the group lined up for runway two-zero. I was handed off to departure and did listen to our fellow BAC members check in. 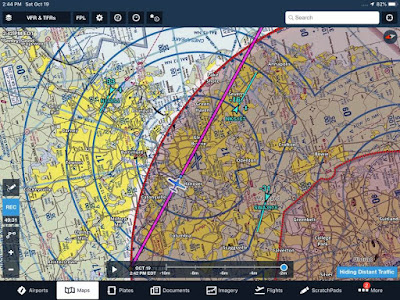 The ride was once again smooth, just like this morning. Approach hand-offs flowed sector by sector, reverse of this mornings flight, and we were enjoying a good tail wind.

Soon we were recrossing the Chesapeake Bay and viewing the zig zag trail of Route 50 out the window. We passed over the familiar Bay Bridge, Easton and Cambridge airports as we continued on for Salisbury. Once clear of Salisbury's airspace I canceled IFR and switched over to CTAF at Ocean City. The jump plane was first to break the squelch, jumpers away...jumpers away, caution ten thousand and below, yes we were home. I coordinated my landing with the jump plane. I was coming in on two-zero and he called out one-four. I advised I would call clear one-four once landing. On short final the jump plane had a visual on me and by the time I taxied clear then back to the ramp he was loading the next group of meat bombs.
A fun day with friends and always fun getting to fly our Commander!
Posted by Gary at 11:30 PM

It was a pleasure meeting you and Mary! Skippy says: "Thanks for the kind words!" Although we were 1000s of feet below you, it was a smooth ride back to Dover. Hope we can meet up again, soon!

Bob, so nice to meet you too. I hope we can meet up at GED or maybe across the bay in Merrillville or cape May.