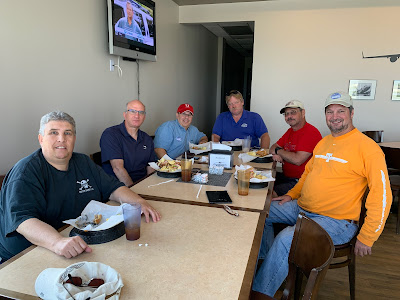 Flying activities are starting to return to normal. The Beech Aero Club ( BAC) posted a few fly-ins that peaked my interest.
Today’s fly-in is in Martinsburg, WV (KMRB). Our group is scheduled to meet up at noon in the Crosswinds Cafe’.  The weather was looking perfect and I sure could use some flight time. Saddle up!
I was off for the airport at 9am, still needing to do my pre-flight and sump fuel.  Mary took a pass today since it was pretty much going to be boys day out to play. I filed my flight plan last night for west bound and filed for the east bound return early this morning.
KOXB JAYBO BAL WOOLY MRB KMRB 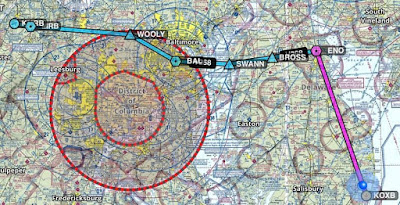 This route is out of the way and I wasn’t looking forward to flying half way through Delaware. Ok, an additional ten to fifteen minutes.
I’m at the plane and getting ready to start when I get an email with another amended route.  Obviously the stars aligned and sure enough I was back to the original plan, direct JAYBO. Bizarre!
Well the route update works for me and I get the fan turning. Once all the avionics are online I chug and plug my new original route. Activity has picked up here at the beach and the transients were heading in for the weekend. Following my run up I waited for a Cessna to clear, and then I taxied out for departure. 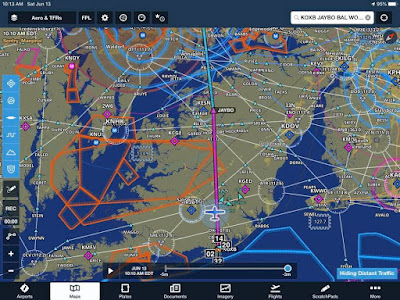 My original planned altitude was for eight thousand but today’s amended route was for six thousand. The ride was smooth and visibility unlimited as I flew over the Chesapeake Bay and Baltimore airport. Along the way I was handed off from Patuxent to multiple Potomac controllers. Once past Baltimore, I was vectored for traffic a few times towards the north west then finally a direct Martinsburg to get me back on track. 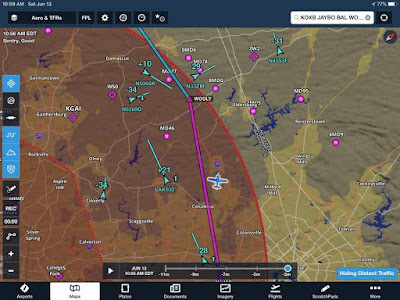 The tower had me report a five mile final and then they requested a right hand 360 For spacing to re-enter final approach. I complied, then reported a three mile final as directed on this attempt.  I made a nice landing and taxied for the terminal building which houses the Crosswinds Restaurant.

The Crosswinds didn’t seem to require a face mask and we were all seated at one large table. The service and food was very good and well worth a return trip at some time.
After telling the flying version of fish tales we all headed out to our aircraft.  I was the next to last to leave the ramp since I needed to pick up my clearance for the return trip across Baltimore and the Bay. The plan was pretty simple and almost a direct flight.
KMRB JAYBO SBY KOXB 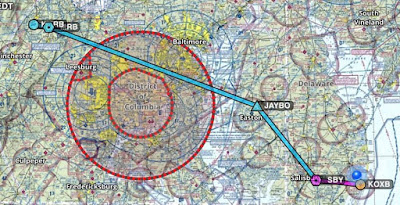 When I called ground there was one amendment, adding the MRB VOR.  This quick add was easy enough and it was along the route home.  With the flight plan entered I taxied out for runway two-six via Echo 1, Echo and Echo 2.  Once at the runway I completed my run up and then was cleared for takeoff. 3 Tango Charlie climbed out, and as directed, we made a left turn direct MRB. Joe was ahead to my left and low, Chris was just off my right and above. BAC flight! 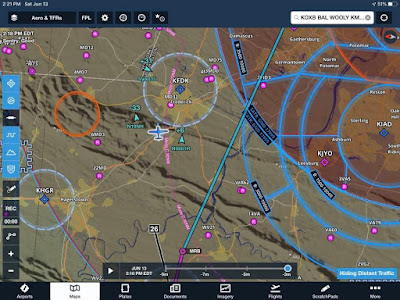 I had a few vectors for traffic then turned direct JAYBO. Shortly after I pointed to JAYBO I was given direct Salisbury SBY. I went through the same approach sectors as this morning, only in reverse, as I worked my way to the beach.The head winds from this morning were now much appreciated tail winds, pushing me along at a ground speed high of 160 knots. The ride was smooth and I provided a winds aloft PIREP for Patuxent approach, as requested.
As I was making my way east I was lowered to four thousand feet.  Approach advised a TBM clipping along over two hundred knots was going to overtake passing below me at three thousand feet.  I was bumped to number two for Ocean City and advised once the TBM canceled I would be cleared for the visual. I can fix that, I reported  the field in sight and canceled IFR. 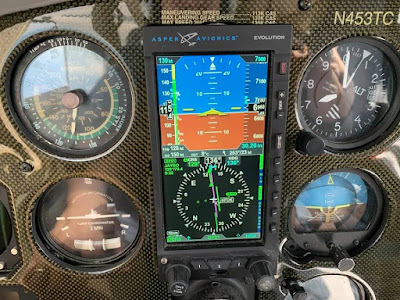 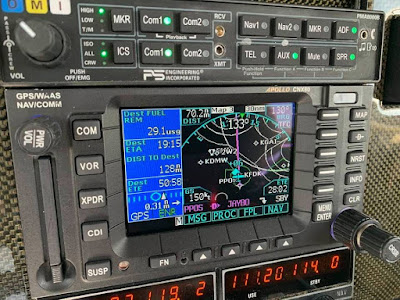 The TBM eventually passed me by, despite my excellent ground speeds. I gave him a good run.  No big deal, we would both have to deal with traffic landing every which way at OXB. I followed the TBM, also selecting runway one four.  I made a nice landing and taxied clear, across from the aviation school ramp. It was a fun day flying and catching up with friends.
Posted by Gary at 3:27 PM