It was too nice a day to pass up flight time so we decided to get in the air.  3 Tango Charlie was fueled yesterday and the pre-flight was completed. Today's task was another quick once over and sump the fuel tanks. Everything looked perfect so I tugged the plane on to the ramp ready for boarding. Mary decided she wanted to go with me today which always makes the flight fun for me. We went back and forth on where to go, and after checking what was open we decided to just fly the beach all the way to the Delaware Bay and back.

I taxied out for runway two, second in a line of five planes. It was busy today with school planes and transient aircraft. When the Cessna rolled for takeoff I announced lining up to wait on runway two. I watched the Cessna battle the gusting winds, 030°14/G22.  I think it was worse as he climbed out over the trees.  With the Cessna upwind I was rolling, it was a wild ride.  I had full aileron deflection in, and I was riding the right rudder for all it could do. I still pushed across the runway as I broke free of the pavement and snapped into position like a wind vane, now into a solid crab.  Of course today I left the videos in the hangar, this was time for me and my bride only.

I positioned the plane just over the Bay so Mary could view the beach and buildings along the way north. Here are a few pictures she took as we pressed on for Rehoboth Delaware and the Cape Henlopen State Park.

I turned around, pointing for home, after we took a few pictures of the Ferry departing Lewes DE for Cape May NJ. The ride wasn't much smoother, but, not as bad as coming north.  We were also enjoying the twenty-one knot tailwinds out of the north instead of fighting them. 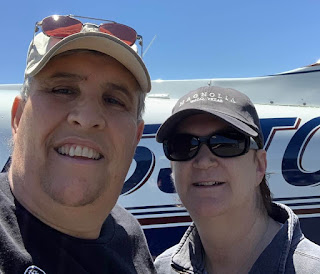 I made my position calls at ten and five out then entering an extended downwind for runway two.  I had one plane on its way in behind us.  I turned my base a bit early  but knew the headwinds would put the brakes on to my good ground speed. The gear was down and locked with two notches of flaps.  It was gusty and I tweaked the power setting just right as I made a sweet landing, confirmed by my brides "good job".

Together we decided on lunch at one of our local favorites, The Sunset Grille.  Good food and service made for a memorable start to summer.