Off to the PA State Capital

Mary and I decided that Sunday would be a great day to visit family in Harrisburg. The weather reports were looking fantastic and we needed a break from the normal routine. This new travel by air deal is pretty cool! We had to be back for a BBQ here in Wilmington, DE by 5:30 pm so "by air" really helped. This is so electrifying……… I have told Gary that I knew when I married him it was going to be a heck of a ride, who would ever had thought literally.

Mary and I packed the flight bag and a few things into 46C as I started my preflight. Mary observes as I walk around (usually talking to myself)while completing the check list. It’s a great way for me to learn and understand. Fuel check complete and time to buckle up for a fun day.

With the run up complete and all systems looking good we announce and roll out to runway 9 for departure. Turning 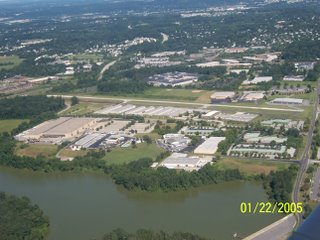 crosswind and downwind I follow up with a departure on downwind to the west call as we climb to 2000'. Switching frequency to PHL Approach I get a quick response from PHL that they are to busy to help me today........hmmmm....ok, fine we will go at it alone. It was encouraging to see that this didn’t bother Gary, he just shrugged his shoulders and concentrated on flying.

I changed my planned ALT from 4500 to 3000 in order for Mary to take some nice photo's and that we would remain clear of KLNS class "D" 2900. Motoring along and about to enter Harrisburg approach territory I make the call and 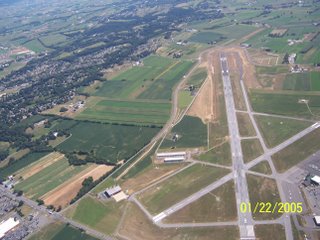 request flight following. We were about 13 miles east of LNS at the time. Harrisburg gave us a squawk code and we were headed for the three mile island towers clearly outlined against the sky. (KLNS as we were flying by)

As we approached Harrisburg International I was handed over to Approach on 124.1 . We crossed over the approach of 31 and were directed to follow the west bank for runway 30. I confirmed and made way for CXY. I was quickly handed off to the CXY tower and I thanked Harrisburg for their help. Cap City tower cleared me for landing on 30 and I confirmed. Last notch of flaps and a nice touchdown with a roll out and right turn off to the t/w that takes me to Harrisburg Jet. Nice and easy landing………front parking spot and overall a very sweet trip, great job by the pilot. A call to Ground to call out my final destination as Harrisburg jet and off we go. Switching to unicom HJC sends a lineperson out to direct me to a parking spot. 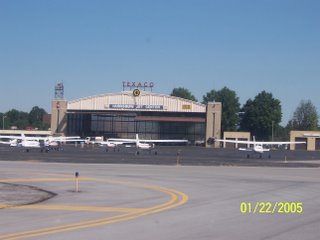 All locked up and our ride waiting we head out the gate to a fun afternoon. Mary and I visited with my cousin Dom and his wife Lisa. It was great to visit and see the children after a long gap in our visits. Their three girls are so nice, well behaved, great manners and did I mention just gorgeous. Obviously looks from their mom......hehehehe had to take a shot at ya' cuz. We had a chance to see all the new additions to the home and just sit and catch up. The pool and landscape looked great and if we had more time I would have been tempted to dive in. Before you knew it, it was time to head back to CXY. We made a stop for some lunch then said our goodbyes. With the new mode of transportation we will be back again to visit soon. 35 minutes in the air beats 2 hours of driving anyday.

We saddled up for home and departed around 3:30 requesting taxi for take off for VFR to N99 with information "Q". Departing 26 we were instructed to climb and maintain 2000 then turn to course 180. A short roll and we were off, climbing out as instructed obviously to clear terrain on our 9:00. We then turned to 180* and were handed off to departure. Departure confirmed our intended altitude then gave us a course change to 130* to follow the west bank. After we cleared the Harrisburg International area we were cut loose to proceed on course. Finally in somewhat smooth air after crossing the Susqehanna River. It was really bumpy until we crossed the river and it took a short while for Mary to get comfortable. I actually asked her if she was sleeping........(duh, her eyes were closed......where's my sign) . She said it helps her deal with "bumps". Some what bumpy
Passing south of Chester County and with both water towers in sight I know I am headed home through the gateway to 27 left downwind. I announce my position and follow with the left downwind entry. One aircraft spotted off to our 2:00 that looks to be entering the downwind maybe midfield. The pilot announces his position and I announce ours...we exchange that we have contact and he opt's for a 360* right turn to re-enter. A turn to base and final as the pattern gets busy with numbers 2 and 3 behind us we gently settle in and roll out to our turn off. Final after landing checks complete our journey comes to an end. I benefited from the flying education I received today and I’m so looking forward to our next adventure.

We are excited about joining the new "club" and the opportunity to extend our getaways to overnights. More seat time to follow in the Piper, and Mary is going to finish the "companion" course in the schools Piper.
Posted by Gary at 7:27 AM