Today the North East Flyers made the monthly run for lunch to the 44N Sky Acres Airport in Millbrook, NY. Mary and I left for the airport earlier then normal so I could give the new pre-heater a try, sorry forgot pictures. The unit was easy to handle although I am going to purchase a five pound propane tank instead of the big monster I had today (I took off our grill). I topped off the tanks during the week so I only need a fuel test and regular pre-flight. 679er was ready to go as we climbed in to keep warm. I hooked up my new Garmin 496 and decided not to

hook up the Zaon since I didn't have the interface cable. Sporty's is sending it out and I should have it by Tuesday.

We taxied out to runway one via taxiway Kilo and completed the run up. I was cleared to back taxi at my discretion and r olled to about the 3700 foot mark,taxiway Delta, just under the shadow of the tower. 679er climbed out with minimum bumps and I was cut loose to change frequency. I contacted Philly Approach and was cleared through the Bravo airspace. I was tracking on the west side working on my VOR skills today. My flight path was along the following VOR's; PTW (Pottstown) BWZ (Broadway) and IGN (Kingston). It was great flight even though Philly forgot about me. I gave Philly a call north east of Allentown (KABE) to request an altitude change and the controller was scrambling to see who I was. He cut me loose to squawk VFR and gave me the numbers for Allentown approach. I was almost out of Allentown's area but I dialed them in and gave them a call. Allentown handed me off to New York approach and I finally had a new squawk code and some extra eyes following us.

The class delta over Stewart Airport (KSWF) was 3000 so as I was clearing their airspace I asked approach to descend to 3000 which would keep me 300 feet above the next delta airspace of Poughkeepsie (KPOU). I had to slow and loose altitude to enter the pattern for 44N and the VOR-A Approach dumped me midfield, perfect for a circle to land either runway. I entered the down wind for 35 and made my calls. Short final the winds were blowing and I came in flat, speed was good not much stall horn at all, just plain flat. I added a touch of power went back in the air

slightly and planted it on the runway and rolled out to the far taxiway. Sheesh...not my best but we are here. Andy (CTArrow) was inbound behind me for runway three five and the lady on unicom told another aircraft one seven was the active. Yikes! I saw Andy on very short final and somebody beat me to the mic button letting the other aircraft know three five was the runway in use and the gusty winds favored such.

As you can see in the photo, my lovely Bride is working the crowd promoting General Aviation and the North East Flyers 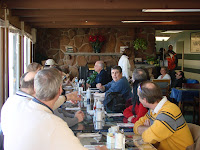 . The couple she was talking to are both pilots and Mary invited them to join us on our monthly events. Everyone eventually made their way in and a few did some laps up and around the fuel island looking for parking spots. Matt parked his Cessna 150 just off the corner of the building clear of the ramp back down the hill to the lower parking, it was a good fit. I guess the group finally ordered around 12:30 and a few stragglers came in as they started bringing out the food. Ryan and Kathy made it in from Williamsburg, he's a flying machine since he just got home from Orlando in the Bellanca and Kathy got in from San Fransisco. Ted and Susan made it in too, he was just in from Airbus training in Denver and we're glad they decided to join us.

The food was very good and the service too. We all

enjoyed the chat time spent together. One by one people started to head out. I think the final head count was twenty four and fourteen aircraft, not to shabby at all. I think Sal hit it on the head, CABIN FEVER.

A few couples hung out until almost 2:30 just chatting about future flying and today's flights. I think Ryan and Kathy got the worst deal on an IFR flight plan being sent out east then turned north over the island and in.....sometimes that basic VFR stuff is ok. The rest of us decided it was time to head out, saying our goodbyes and walking out to our aircraft. I didn't take on any fuel so it was a walk around for me. Ted in the Seneca II headed out with Adam number two

and Mary and I taking the number three for departure. After Adam was in the air we were rolling. We turned left on course and picked up flight following with New York approach.I climbed to six thousand five hundred and sat back and enjoyed the flight. I had a few call outs for traffic but not real busy at all. We were handed off to Allentown then dumped since Philly

wasn't taking hand-offs. I thanked Allentown and dialed up Philly to request following myself. I got a squawk code and the all so important magic words, cleared through the bravo. A few minutes into Philly airspace they decided to turn me direct to Modena (MXE VOR). So much for the direct to Wilmington plan. I requested to descend to three thousand and then canceled flight following, I then turned myself direct to Wilmington. There's more then one way to skin.....ah well you know.

I contacted the Wilmington tower and was cleared straight in runway one nine, report two mile final, I acknowledged. A smooth landing and taxi to Red Eagle, we were home. 3.5 hours today for the round trip, well worth the time spent with our friends and meeting a few new folks too!

Great photos! Very clear. Wish I could have made the trip, but we pulled off Beckys's Birthday Surprise last night! hope to catch up again with the group soon, I need to get out and fly.

Thanks! Glad to hear all went well with the surprise party, pass along a happy birthday from Mary & I.

Catch up Wednesday 2/25 at the safety seminar at Brandywine.