Today was a get used to the new Garmin 496 flight day. The wx was almost perfect (I can always hope for a few more degrees) and my friend since grade school, John, joined me for the fun. The plan was to find the best location for the new Garmin 496 and a suitable location for the Zaon XRX PCAS. I ordered a cable that allows both units to interface with each other. This will allow me to move the PCAS all the way forward to the windscreen since I can see the traffic on the 496.

John and I loaded up the gear and played around with some locations while 679er patiently warmed her oil. We had wires strung out from side to side for power and XM WX having to make sure nothing would get caught up in flight. With some green showing under the oil temp needle I call for my taxi clearance and note my directions to runway one nine via taxiway kilo. 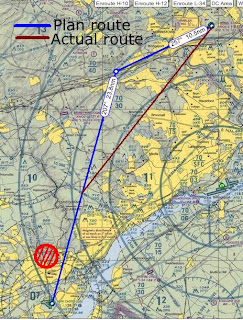 The winds were back and forth from noon to 1:30 so we launched off runway one nine turned left on course to get us headed north bound but remaining east of the Vice Presidential TFR just 5.4 miles north of Wilmington. I picked up with Philly approach and was cleared through the Bravo proceed direct Wings. Cool! Life made simple, as I reprogrammed the on board GPS and took up a new heading. Our flight path took me north west of the field so I made my calls, listened for traffic and entered on the crosswind for runway two four. I was above pattern altitude maneuvering on the crosswind as a twin engine pet rescue flight took off stating he had me in sight and would pass below me. That puppy (pun intended)was haulin' as he zipped below us and then climbed out, very cool to watch him go. I called out my downwind base and final following with a decent landing and roll out to parking. I slowly drug these bones out for the cockpit and buttoned up when Rob and Bob waved us over.

It was an extra treat to see Bob and Dru's daughter McKenzie and also splashing in the puddles making foot prints. Yes, the simple little things like making wet footprints somehow keep my mind occupied, what can I say. We all walked over to 679er and after drooling ...I mean watching the Super Viking next to us fire up and taxi out we decided it was time to fly. We said our goodbyes to Bob and Mac then climbed aboard 679er.

Rob was right seat and John climbed in the back with his cameras in hand. I taxied out and took off from runway two four and got us headed towards the practice area. Once at altitude I asked Rob if he wanted to fly a bit, he agreed, and we made the my plane your plane verbal transfer to back up the switch. Rob was very smooth, his altitude hold is better then I do, even on my IR lessons. I'm looking forward to the Gaston's trip in June and our seven plus hour flight to Arkansas. I guess we spent at least 30 minutes out and back with a midfield crossing to reposition for the 45 entry to two four. Once established on the downwind We swapped verbal controls and I slowed 679er down for our landing. I drifted some in the flair but made an ok landing back at Wings. I briefly shut down for Rob to exit and John to move back to the right seat.

I was soon leaving the area and contacting Philly for our ride home. Approach was very good and cleared us through the Bravo. Once we had a visual on Wilmington we were turned loose to contact the tower at ILG. I was directed to enter a left base for one nine which I thought was really strange but then figured I was moved further east to avoid the TFR. I was well above and east of it anyway but....better safe then getting a black hawk helicopter escort and road rash on the face.

Once at our tie down, John and I messed around with locations for the equipment and I think it will be as follows. The 496 will be mounted left of center as far up the windscreen (as close to overhead) as possible and the Zaon PCAS will be mounted right of center all the way forward to the windscreen. I'll bundle the master cable made for the link up of the units and have it neatly stowed to avoid any rats nest wire bundle and to maintain a safe cockpit. I almost forgot we had a target come right at us from a 2:00 position inside the ILG Delta space at 2.0 no talkie to anyone. ILG tower was not happy and we eventually passed no factor. I never did get a tail number to pass on but I'm sure they watched him closely.

Overall a short hop today but with a good reason. Rob got some time in 679er and I pretty much think the placement of the electronics is worked out. Tomorrow we are scheduled to fly for breakfast at Kay's located on the field at Cambridge. MD KCGE.

Great meeting up on Saturday! Thanks for letting me take the yoke for a bit, it's a nicely equipped and smooth flyer, even though it was bumpy. Looking forward to the bumpy video if you post it.