I Believe I Can Fly!

Yep, just like the song says, I believe I can fly! I had my first lesson with my new CFII. It's amazing but I can hold altitude and heading and flow through my checks. I sure did miss 679er, and I will never cheat on her again. Needles to say the song was stuck in my head at this point and I was walking around the plane singing. No wonder we have no active neighbors on the ramp!

After my preflight and ramp rendition of I Believe I can Fly Chuck walked out on the ramp and we talked about 679er, her maintenance, engine time, who works on her, who owns her and some general upkeep on my girl. Really good questions since he is going to trust his skin in this bird. We climbed in and I went through my normal procedures flowing through my checklists pre start and pre taxi. ATIS info noted, everything set and taxi instructions noted. I ask Chuck if he would like to try a brake test on his side then I followed suit. We are taxiing to runway one nine as I perform my taxi checks. I notice on my sweep through the gauges that the 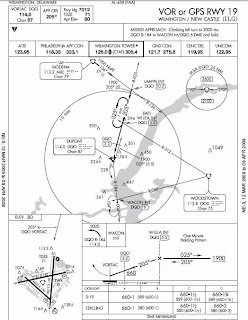 679er climbs out trimmed at just a tic shy of eighty knots until reaching three thousand feet, at which point I level off. Beautiful, power set and trimmed, mixture leaned we start working on basic attitude recovery. Honestly it's been awhile since I've done this stuff except for some sim work many months ago. Chuck needs to see me react quicker or more "robotic" as he called it. I was in a nose down 30* banking attitude when he gave me the plane back, I made the throttle correction but as I started to level wings I pulled back on the yoke to bring the nose up. I was asked to snap the wings level more of a crisp movement with authority. I worked through a few different attitude recoveries and we moved on to some steep turns and such. Good altitude hold with all my maneuvers and nice roll outs on headings.

It was time to shoot an approach. I was around 14 miles south west of the DQO VOR and tracked to intercept the 025* ra 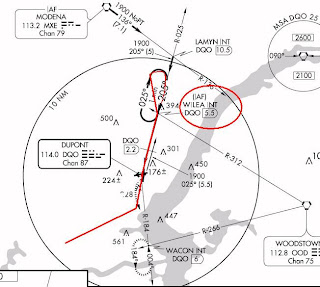 dial for the VOR RWY 19. Tracked real nice, held altitude and had some very good discussion on instrument flight. Chuck made the initial call to Philly for the practice VOR approach. Philly asked if we wanted vectors or to fly the approach, I responded we'll fly the practice approach. Now flying the 025* radial we passed the station and I started my turn out for the procedure turn and caught that I needed to pass WILEA intersection first. Right bank, back to 025* and all is well. At the 5.5 DME mark I turned outbound to 355* for my teardrop procedure turn. One minute passed and I started my right turn back to intercept the 205* radial. As I came to my heading the CDI was coming in on time and looking good. I did get a bit heavy handed as I followed the localizer but tracked in ok and hit all my altitude as I passed each point. I passed WILEA and started down from 1900 feet. Calling altitude and course I leveled off at 700 feet (decision height 660). I did get a call from Philly to keep the speed up a hawker jet was number two to land. I did my best and that was the last I heard. Once given the ok to look up I saw runway one niner just off center but dead ahead. Flaps set for landing double check on fuel, pump and lights has me ready bring 679er in. Not a bad landing with a short roll out to taxiway Kilo to clear for the hawker and off to red eagle.

GREAT lesson, 1.1 hours of fun stuff and I feel I can still fly. I honestly was starting to wonder if this rating was going to work for me. I'm up again tomorrow at 8 am and should get some actual....very cool stuff!!

If I can see it, then I can be it
If I just believe it, there's nothing to it
Hey, cuz I believe in me, oh
If I just spread my wings I can fly
Don't you hate when a tune just sticks in your head?
Posted by Gary at 6:09 PM

Now, on another topic,... I hope you don't take singing up on the way to Gaston's,... I don't know how much Adam and I will be able to handle! Ha Ha Ha

Yippee!! So glad things are looking up (ba-dum ba!). Hope you had actual today.

Great job, Gary - glad to hear you're fully back in the game.