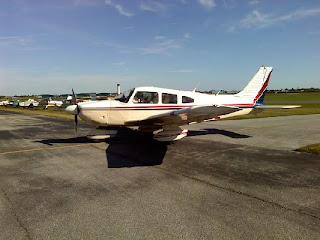 Sunday was just to beautiful to pass up flying. My plan was to pick up MikeB and RobS and go shoot approaches and spend some time with friends doing what we love to do, fly. I sent out my plan for the day on Saturday night and double checked my flight bag and electronic goodies. Sunday morning I sent a text message to Mike and Rob to give a heads up I was headed to the airport, who wants to fly? Mike never responded and Rob has a new iPhone that apparently the text message app is not working. I took my time with the preflight and did hook up with Jeff at 33N. He was going to head to Lancaster (KLNS) so I decided to meet him at 33N and we would fly together, well not formation or anything just both headed in the same general direction.

I arrived at Delaware Airpark (33N) and taxied to the terminal. Jeff was fueling 93Zulu so I spun 679er around and shut down. I figured I would check on my transponder since Dover Approach was reporting no signal and check for any messages from my planned two passengers. This transponder problem has reared it's head in the past, but the shop gave us the thumbs up that is was working, that really helps me know. I purchased a bottle of water, chatted with Jason working in Op's then made my way back out to the plane. Jeff suggested that we get in the air and I would contact Dover to see if they could "see" me, if the transponder was working. I climbed out of the Airpark and turned north for Wilmington. If I could not get this to work I was going to park back at ILG and ride with Jeff to Lancaster. Dover gave me a squawk code and I had little hope. Approach handled some other traffic then came back with, Archer 28679er , radar contact, 7 miles north west of 33N and gave me my altitude, I confirmed his report. Jeff asked if I was then going to LNS and I respond direct LNS.
Lancaster was a busy place as I worked my way into the pattern. I was cleared for a left base runway two six and Jeff who was less then 3 miles behind me got the straight in three one. I was given the land and hold short when cleared to land with runway distance. I acknowledged cleared to land two six hold short runway three one. I was down smoothly with a roll out to the first taxiway. I cleared the runway and contacted ground having to hold short for Jeff on very short final. Jeff looked good as he set 93Zulu down smoothly. He taxied clear and I was given cross runway three one without delay and I scooted across while looking left at a Cessna on final.
I shut down at the west ramp and headed in for lunch. I did get a voice message from Rob that he was waiting at Wings KLOM. I called him right away to let him know I didn't hear anything back on my text at 9:15 so I changed plans. I really felt bad, I still do. We had a communication breakdown. Rob was on time and waiting at Wings and since I didn't get a confirmation I didn't chance flying up. We will both know better the next time.
I watched a lot of traffic in and out of LNS this day and it felt good just sitting outside enjoying the sunshine and company. Jeff and his son Bryan joined me at the outside table after he spent some money at the "toy" shop for pilots.
It was a short hop home to Wilmington and I didn't bother with flight following, I just wanted quiet time. So much to think about with the potential plane purchase, my Bride running herself to the limit with her parents move, work and the list goes on, as it does for us all. Like I said quiet time, I flushed everything out and enjoyed the clear sky and scenery passing below me, it really does the mind good to just relax and listen to the quiet.
After securing 679er I noticed that I forgot to hand off a training CD to Jeff, one of the goals for today. I called him to leave a message since he was in the air I'm sure. I had just left the airport, maybe a few blocks when Jeff called from 58M Elkton Maryland. We both laughed about the CD and I made a U turn to head back, he was going to make the five minute hop to meet me at Red Eagle. I watched Jeff fly a right pattern for one nine and then taxi in. I walked over and passed the CD through the window so he didn't have to shut down. Transfer completed! I watched him taxi out and take off, with a smooth steady climb out. He would be on the ground at 33N before I got home.
Posted by Gary at 6:38 AM