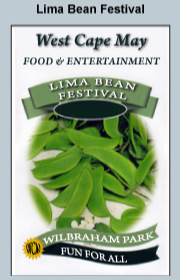 I swapped a few messages with Ryan and Kathy from Williamsburg, VA and Ted and Susan from New York during the past week.  Mary and I decided that we wanted to attend the Cape May wine festival along with the West Cape May Lima Bean festival.  What better way to spend the day then with friends, the plans started to take shape. Mary asked her Mom to join us and she accepted. I managed to scrounge up a few discount coupons at work for the wine tasting entry fee and made the call to AeroWays for fuel to the slots plus two each tank.

Mary and I got a surprise visit from my cousin Ralph and his girl friend Dawn on Friday night. They rolled in on their Harley's taking a break from their road trip to Ocean City Maryland. We decided on a dinner out at the local sports bar, Stanley's. After dinner we headed home and watched the Phills get bounced out of the playoffs, there's always next year. I also received a text message from Ted telling us they had previously committed to a pig roast at their home airport, they would not be able to meet up with us in Cape May.

We scooted out the door by 8:30 making a stop at Brew Ha Ha for Mary's Chai then the short hop to pick up Marys Mom before heading to the airport. I rolled through the gate and we went through the pre-flight routine.  Mary's Mom boarded and I finished up with a fuel sump.  Aeroways shorted my order filling to the tabs plus two gallons each tank to total 17 gallons per side vs my order of slots plus two each side that would have provided 22 a side. I'm safe with the lighter fuel load, its only twenty minutes each way and a climb to three thousand.
We were soon climbing out on course in a clear blue sky taking note of the excellent view this morning. As we crossed the Delaware river pointing east you could see the Atlantic city skyline and almost the tips of Cape May NJ and Lewes Delaware, I would need a bit more altitude. 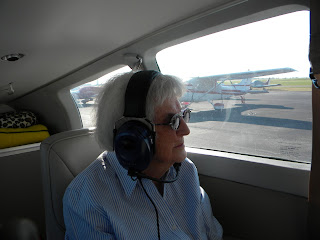 The  flight was smooth as I rode along hands in my lap and pretty much feet on the floor. Traffic seemed light as we passed through the Millville area listening the remote Millville radio broadcasts.  We crossed Port Norris and had Cape May in view as I started my descent and advisory calls.  Ryan chimed in on frequency that they were fifteen minutes out.
I made a smooth landing after blending with the one Cessna in the pattern doing touch and goes. Mary and I buttoned up 08Romeo and awaited Ryan and Kathy's arrival.  A Glassair taxied in and another Cessna followed by the Bellanca Super Viking. The gangs all here! Ryan and I got the rental car squared away at Hertz, formerly Ace Sharper. Ryan had a $50 discount coupon from a recent trip he had taken so that really helped the overall price. The total for the day was $19.95, what a bargain!

All aboard! We loaded up for the Lima bean festival, three ladies in the back and the men working the front office navigating our way into town. Ryan made use of the cell phone to look up the park that we need to find. Kathy suggested asking the mailman walking down the street so Mary put the window down and did just that, we all got a good laugh. Yes, the men would have never done that conversation followed as we passed a large message board sign noting the festival. 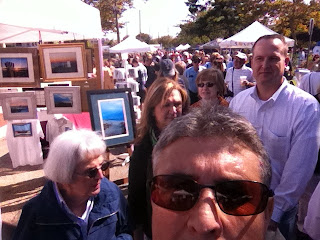 With the passengers safely dropped at the main entrance Ryan and I scouted out a parking spot. We found a good location just a few blocks down the street. It was great to catch up and talk flying as we made our way back to the park and find the ladies. Once all gathered up we investigated each table and booth making our way with the flow of the crowd, and it was crowded. One of the first stops was finding breakfast, well at least something to eat. We all agreed on the Lima bean chili and found an off the path place in the shade between vendors to enjoy. 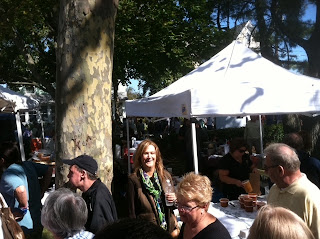 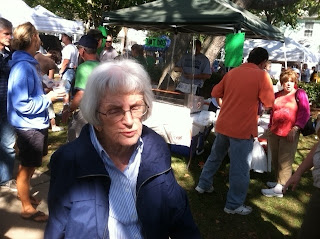 We continued the stroll, ladies working through each vendor while Ryan and I talked aviation keeping our party located with traffic call outs. There was a little something for everyone as we made our way, books, clothing, jewelery, food along with every antique and collectible you could imagine. We managed to make it through the entire festival and ended up at our original entry point. The men walked for the car and returned to pick up the ladies, the plan worked flawlessly.

Traffic was pretty heavy as we made our way out of town and back towards the ferry terminal for the wine festival portion of the excursion.  I forgot my work badge so no chance at special parking, instead we dropped the ladies at the main passenger terminal entrance and then scouted parking. Ryan and I made a few laps and found a good spot but there were a few cones, obviously left behind or misplaced taking four spots at the far end of a row.  With our thought process spinning we agreed cones are advisory in nature only and helped group them together to feel more secure, which by chance opened up a parking spot. Good job team! 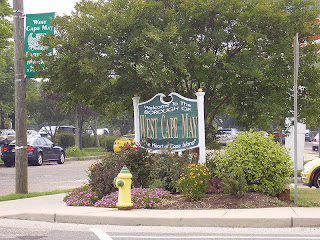 We joined the ladies already in the long line to purchase tickets. The line moved ok and opened up to a third line for cash purchase. We had our coupons in hand and were excited right until someone working the event said it cost $25 per person. The men had to remain dry, we were flying later this afternoon, and the the ladies gave it some thought mixed in with the we still needed to find a late lunch/dinner and judging by the size of the crowd we would be standing to eat. The group huddled up and collectively decided to head back towards town and find a nice restaurant serving seafood.  That didn't take long, we were walking for the wheels.

We were loaded up and heading back into town with a slight route change. I took a different road that Mary and I once tried and it seemed to shave off some time. Ryan mentioned this looked familiar as we tried to make our way to the ocean, he was right, we were passing the Lima bean festival coming in the opposite direction, our previous exit strategy,we all had a good laugh. Back to the beach and board walk area searching for a restaurant.  Yours truly while looking and talking and following traffic slowly drove through a red light as Ryan tried to alert me. Ok, I'll pay attention to my driving while everyone else looks for places to stop. 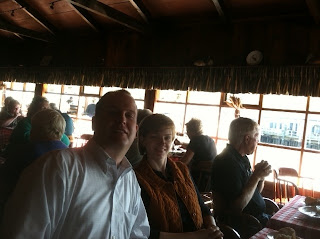 Oddly enough we selected the Lobster House, the same place we ate last time the group was here. Today we decided on eating indoors and had maybe a thirty minute wait. Our seating was pretty good and we could watch ships come in and out of the docks. There were two large yachts that made their way in and they were impressive, what slow economy? 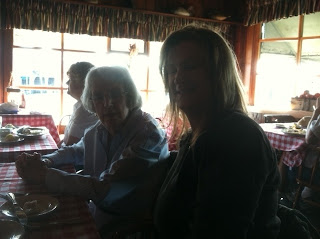 Service was very good and the meals were too. I had the stuffed flounder, filled with crab meat and scallops topped with shrimp and mornay sauce. Mary had a chilled half lobster with potato and shrimp salad, Mom had lobster salad, Kathy had crab imperial and I can't remember what Ryan had.

We all passed on desert and coffee, we had our fill. I should have mentioned our timing, we were ahead of traffic or driving the opposite way of the backups all day, leaving the restaurant would be no different.  As we walked out of the dining area the line to enter had backed up through the restaurant and out to the main doors, it was packed!

﻿ ﻿
We decided to call it a day now that we had some good exercise followed by the perfect meal. We headed out of town and back towards the airport. I missed the right turn as I was instinctively heading back to the ferry as if I was working. A few right turns later we were at the airport entrance and heading to the aircraft. We returned the car and made our way through the terminal out to the ramp. I snapped a few pictures and we said our goodbyes vowing to catch up again soon with Ryan and Katy. Maybe a trip to Williamsburg or a show at the Ferguson Center in Newport News.
I did a quick pre-flight and got everyone squared away in 08Romeo. I was soon at idle getting set up for home as Ryan taxied by. We followed number two for runway two eight. My run up completed and watching the Bellanca climb away towards the Bay, we rolled for take off. It was another smooth ride, this time back to Wilmington.  Once again a great view on a clear day watching the sun to our left making its way towards sunset. I contacted the tower with the current info and made my way for a straight in runway three two, report mid river. I had pulled the power for slow flight down the runway, approved to land long.  As I sat 08Romeo down on the mains a huge flock of purple marlins took flight, left to right and head on, honestly they were everywhere. Two bounced of the windshield and one hit the side of the plane. I reported to the tower that there will be few dead birds on the runway just past our touchdown.  The tower asked me to call and advise of any damage.  We taxied in and shut down giving 08Romeo the once over. Leading edges looked fine and the only residue left was some dusty dander patches on the windshield.  I called to let the tower know there was no damage. Operations came by to confirm no damage and advise I had reduced the feathered population.
All in all a great day out in the sunshine and spending time with friends! 08Romeo saved hours of ground travel and made for an enjoyable trip to and from the fun times in Cape May.

Next up annual, 08Romeo gets to spend some quality time with Roger and the crew at Cecil Aero.
Posted by Gary at 8:10 PM

Wow. You really lucked out. Thinking about one of those birds makes me cringe. Next time I see you Gary I am going to have to rub you for good luck.

REDUX. Got cut off.
Thinking about one of those birds striking your prop really makes me cringe!!

Didn't see anything on the prop. I have no clue how they missed getting through the prop. The plane was clean excep[t for the powder puff marks on the windscreen. I guess the two unlucky ones had just taken their final dust bath.

I Love the Lobster House. Haven't been there in a while. Always had a great meal there.

Gary,
Thank goodness no damage to the plane. That had to be startling and upsetting.
Love the pix of Maggie. Now I see why you need a bigger plane. Split rear seat looks very handy.. assume you removed one to make room.
Love reading about your flights and seeing your part of the country.