I had 08Romeo plugged in for two weeks waiting on a decent day to fly.  Today it was cold, clear and smooth, perfect for a fun flight to get the oil pumping. Mary passed on flying out for breakfast and Mike was scheduled to fly to KHEF - Manassas Regional Airport/Harry P. Davis Field in Washington, DC.

I hoped that Vince wouldn't be on a fire call and that his Friday night crew duty would be over in time to fly. We swapped text messages last night and the plan was for him to text me if he was running late. All went well, as he trotted up to his house a few minutes after I arrived. 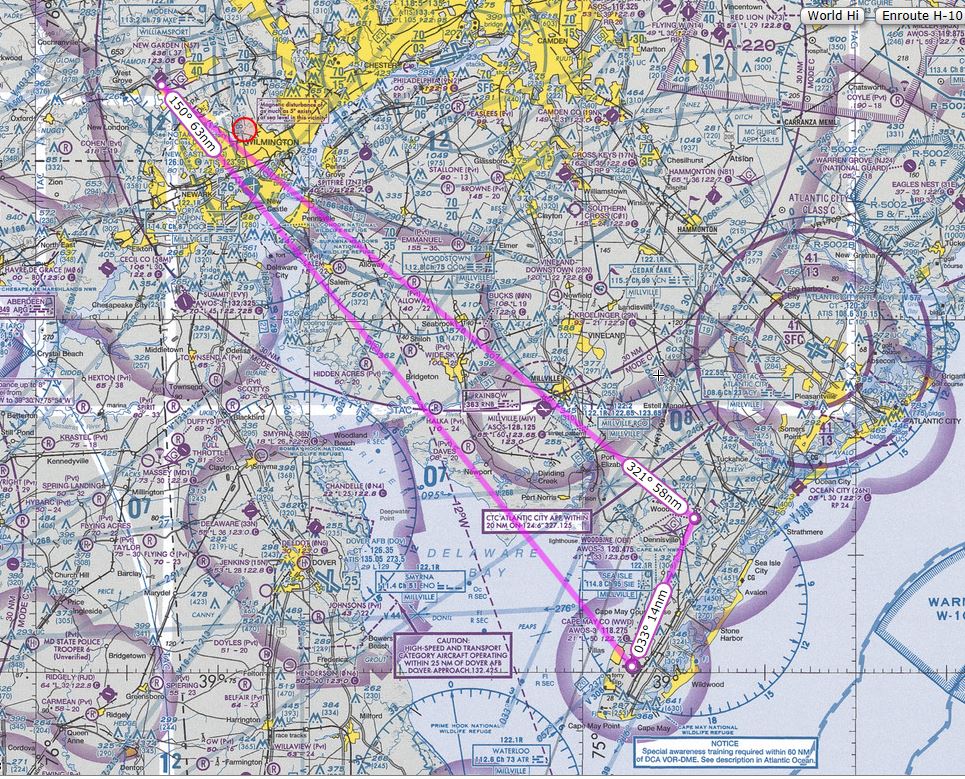 We headed to the airport and quickly went to work on 08Romeo. Uncovered and pre-flight completed we pulled the plane through the small pile of snow that accumulated in front of the hangar that had slid off the roof. Vince parked my SUV in the hangar and we climbed aboard 08Romeo to stay warm and get the fan turning.
I have to say the battery minder on the maintenance setting has been a blessing, two blades and 08Romeo was purring along. We added fifteen gallons of fuel to bring us to forty-six, sumped, restarted and followed with a run up. All systems were good to go and 08Romeo launched off of two-four loving the cold temps and asking for more with a steady 1000 fpm climb.
It was a hands in your lap flight across the Delaware river and skirting along the New Jersey coastline following south along the Delaware Bay. We cruised at three thousand five hundred and I gave Vince a chance to shoot the RNAV 19 into Cape May.  I'm loving the WAAS upgrade and the LPV decision heights. It's great to fly the needles on a GPS approach.
﻿
After enjoying a great breakfast at the Flight Line we saddled up for the Woodbine airport. Vince and I had hoped we could catch up with the group flying to Georgetown before they left. We did get to meet up with Jeff and take a look at his Mooney post bird strike with fresh paint, it looked awesome!
We finally decided it was time to head home so we taxied out to runway one three and launched for home. We did depart the pattern opposite of the published left traffic so we didn't have to deal with all the seagulls overflying the landfill. Yes, there is a landfill just outside the left downwind for one three and it was busy with birds when we landed.
We enjoyed a fifteen knot tailwind coming home slipping under Philly's Bravo and just above Wilmington's Delta. I made an ok landing with a gyro copter on my heels and taxied 08R back to the nest. A fun day, 2.1 in the books and 08Romeo got some much needed exercise.
Posted by Gary at 5:27 PM

Looks like you had a great day! Enjoy the WAAS!

I share your pain, Gary. My flight on Thursday was my first in nearly a month. Tough on the airplane, tough on the pilot. I worried about my battery after such a long interval and such low temperatures, but she cranked right over.

Love the photo of the of the ship gliding through the ice floes in the river!

Chris, My last flight was 1/12, twenty days! I'm not sure Mary can take many more stretches like that. :) We are so looking forward to spring!

Read your post, great pics as always. The lighthouse was my favorite.

Nice angle on the security cam - looks like you've got one hell of a rime buildup on the leading edge! ;-)