A departure alternate is an airport and approach you'll fly if trouble finds you after you enter the clouds.

Honestly, I haven't planed this before and usually figure on getting below a layer and picking the best landing place I could find. However, if I had enough altitude I normally would have used the OBS function and dialed in the runway heading, intercept it, and ride that until I drop out of the clouds and hopefully make the runway. If not, the best place I see to set the plane down will work. I normally don't depart unless I have 1000-1200' ceilings.

I will say some of the worst conditions I have taken off in, have been out of Ocean City. Noting our recent trip out to Dubuque Iowa, it started at 800'overcast, visibility 4 miles and mist. I launched below my minimums, but with good visibility below the layer and armed with the emergency plan to turn back and drop out of that forecast and make for the pre-planned runway. As a secondary option I would pick a spot along the highway, or if all else is no-go I would shoot for the coastline. None of the above was a comforting thought in an emergency situation, but at least I had a plan ready when we took off.

Having read through the latest online IFR Focus #7, my Ocean City departure scenario kept running through my head. I should have used more of the options my avionics could have provided me.

If we have altitude, setting up a pre-planned approach can be a viable option. So lets do a little planning, while still on the ground, for that what if situation.
I failed to video the process required to delete the approach portion once safe and on your way.  It's a simple few clicks on the Garmin 530W. 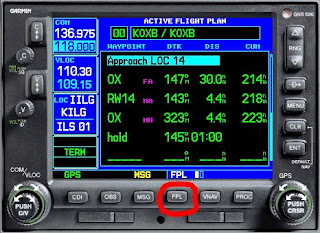 Click on the FPL button to bring up your complete plan. 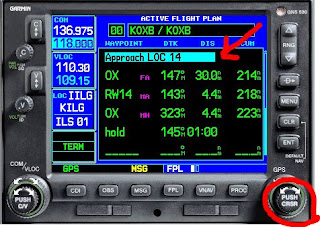 Click on Push CRSR then turn the outside knob until you find the approach you selected. 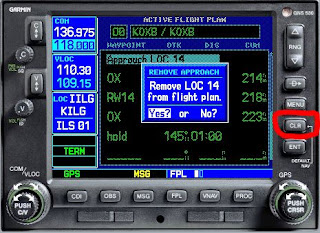 It seems pretty easy to take advantage of this procedure with the Garmin series GPS units. I'll be adding it to my pre-flight flight plan set up.
Posted by Gary at 2:00 PM