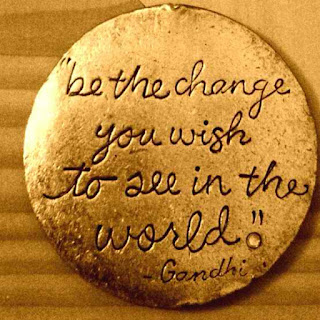 Pay it forward is an expression for describing the beneficiary of a good deed repaying it to others instead of to the original benefactor.

Mary and I stopped at one of our favorite breakfast stops this morning while running errands. When we asked for our check the waitress said someone paid for it. Our first reaction was that dumb awkward stare then we thanked her and who ever did this.
I wanted to leave tip and so we talked to the manager. He insisted everything was covered. Mary and I asked if we could pay it forward having been moved by such a thoughtful gesture by a total stranger. After insisting the manager finally agreed and we paid it forward so a family could enjoy the same.
The manager did thank us saying there're some folks who would appreciate our gesture to pay it forward.
There are still good people in this world. I have to say this was a first for me, us. I have never been on the receiving end, it was a very moving experience.
Posted by Gary at 3:04 PM

Jim and I live to secretly pay for someone's meal. One time was really wonderful. A mom came is with four little girls and sat next to us. My first reaction was oh no. But I have never seen mire well behaved children even when mom had to take the youngest to the restroom. It was amazing and well worth it to make their day. It's really a good feeling.

Sandie, we have no clue who did this but it really moved us. Thanks to you and Jim for such kind acts, as a recipient I have to say it touches ones heart.