Last night I swapped text messages with Charles G from New Garden, N57.  We hatched a plan to meet up at Cambridge Airport at noon for lunch.  Mary was meeting with a group at the Parke Clubhouse so I had some free time to fly.

I headed to the airport in time to check and order fuel if needed, I thought I had enough for today's mission.  KCGE is thirty minutes each way, ten maybe eleven gallons required. When I did my preflight I stuck the tanks, calculating fourteen on the left and twenty-three on the right. I was easily good to go. 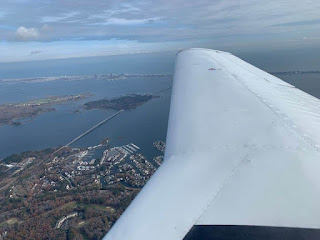 I shut off my preheat and tugged 3 Tango Charlie out on to the ramp. It was a quick start with minimum warm up time. I do need to come up with some sort of big sponge wedge to block the nose gear opening to help retain some of the heat.

Once I picked up the Ocean City weather I taxied out, wondering if Charles was still a go. Just ahead was the last taxiway to the terminal, so there I sat and sent a text to advise I was started and only a few minutes from take off.

Charles was running late after meeting with a client so we changed plans.  I was now headed to New Garden, N57. Charles would meet me there and we would take his car to go grab lunch. 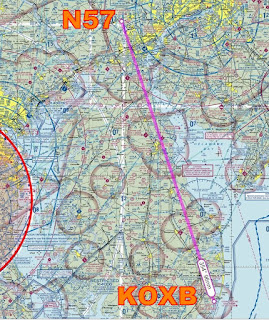 I made a quick check of NOTAMS and TFR's along with the weather review for the area. The ride north was going to have me dealing with strong headwinds, so I recalculated fuel and launched. 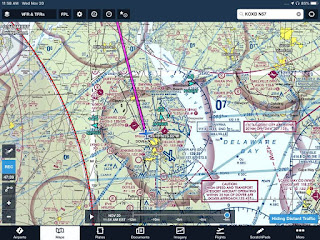 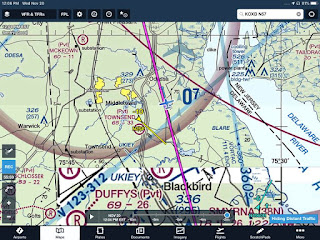 It was a long bumpy ride as I pushed through the twenty-three knot headwinds. My ground speed was holding at 110 knots and I hoped I could enjoy the return flight tailwinds.

I made my calls and entered the pattern for runway two-four. My landing had a direct cross wind and the sock was pretty much straight. Somehow I skipped one in and rolled out to the end of the runway, I always like to save brakes.

Charles was waiting and we headed out to Anthony's Coal Fired Pizza. Lunch was very good, I haven't eaten at an Anthony's since we retired to Ocean City. Thanks Charles for buying lunch!

With a full tummy Charles took me back to the airport. I was hoping 3 Tango Charlie would hot start after sitting.  There was no heat to the touch inside the cowl, so maybe she would behave. I left the settings exactly like I had shut down, I wanted to try something new.  I gave a few seconds of fuel pump then cranked, she fired right off, then shut down.  I rechecked my start list and I had touched the fuel control but didn't turn it back on, duh!

Ok second try.  I did the exact same procedure and she fired right off. Now I'm not sure if the 'new' way was the key or that she had cooled off, future testing will answer this question.

I taxied out towards runway two-four and did my run up, actually having to wait for some oil temp to build up. Once my temps were good I rolled on to the runway and turned 3 TC loose. The winds were really blowing and as soon as I went wheels up, despite aileron and rudder, I blew to the left side of the runway and crabbed my way up and away. It was, um, exciting. 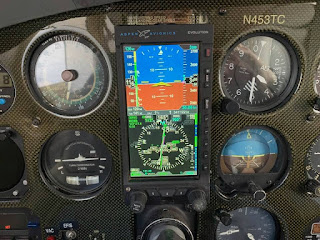 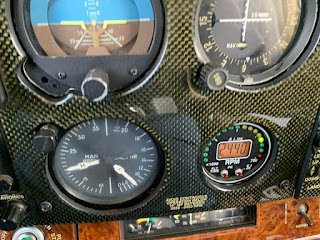 Once in cruise I pulled the power back, running 22/24 and loving the tail winds.  The cruise speeds were 145-150 knots. Once overflying Delaware Coastal (KGED) I  started my descent for Ocean City. The plan was to enter on the crosswind for three-two, then turning on the down wind, making my way through the pattern. With winds,right down the runway I finished the day with a nice landing.

There was another aircraft, a twin, inbound for three-two he was seven out on his initial call. As I cleared the runway the twin was just coming over the numbers, he made the first turn off.
I had a great time meeting up with Charles despite a bumpy ride both ways.  Mary and I are looking forward to having Charles and his bride down for a dinner here in OCMD.
Posted by Gary at 11:30 PM

Somehow "bumpy" is way too exciting for me. Glad you're home safe.

I had to laugh at this as I flashed back to a departure we made earlier this year when the direct crosswind was 17G25. When tower instructed me to fly runway heading, we were visibly sliding sideways through the air on climb-out. Much like you expressed, it was one of those moments conspicuously outside of the normal envelope.

Glad you’re continuing to get comfortable with 3TC!

Chris, I'm learning more everyday. I will say the rudder authority is a bit different from the Deb and my Sundowner. Yes, some days we are just the weather-vane on the barn roof and all we can do is enjoy the 'different' view. ;)