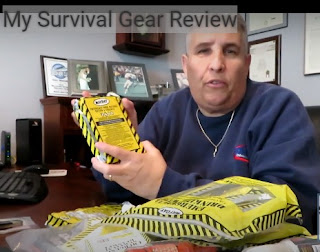 My Mayday Survival gear food and water will expire in August 2020 and I have ordered replacement meals and water, for the original kit. So I guess it's time to walk the walk and not just talk the talk.

I did a blog post and video on the contents of my survival kit and at that time vowed to taste test the food bars and water before they expired. What exactly was I thinking? Insert eye roll. 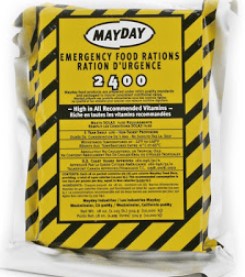 From the supplier...
Not only a food ration that tastes great, but is also very nutritious. Our 2400 and 3600 calorie bars are approved by the U.S. Coast Guard as well as the Canadian Transport Department and have a 5 year shelf life. The new addition to our family is the 1200 calorie food ration that is great for the one-day meal. All our food rations are baked under strict supervision and all have that great taste of apple cinnamon. Mayday food rations can be stored outside up to 149 degrees (°F) and can be eaten without preparation. 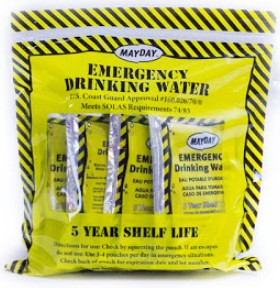 I have decided to order a couple of different "survival" meals.  One sample, a 72 hour kit from 4Patriots. The 72 hour meal pack includes the following meals.

Each 72-Hour Survival Food Kit is designed to feed 1 person for about three days, depending on how much you'd like to eat each day. You get 16 servings of delicious and nutritious survival food good for up to 25 years of storage.
That’s meals for breakfast, lunch,and dinner! 3,760 total calories (avg 1,253 calories and 5 servings per day). Enough energy and nutrients to help you survive a 72-hour emergency.

The 4Patriot meal will require the ability to boil water and that means a mess kit to add to my gear. There already is a mini stove included. One of my dislikes is that the four and eight servings are bulk, so three packages to a kit.  That also means measuring out the food rations and resealing for the next meal.

I think this might not be as practical as an MRE (meal ready to eat) but I wanted to try them out. The thought of having to add additional items to the survival gear to be able to boil water (a small camping type pot and utensils) along with using up the valuable water supply packets just didn't seem as survival oriented and keeping weight to a minimum. 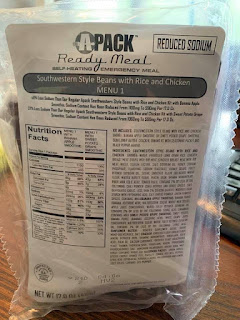 The second company I am trying is the Ready Store. One of the nice things about this MRE is that the meals come pre-packaged with a flameless heater for each entree. These convenient heaters only require a tablespoon of water, which is included in with the meals, and produce enough heat to warm your MRE in a matter of minutes without having to light a stove, or use your water ration to cook.

The MRE comes in a variety of entrees along with snacks and condiments.  Of course the goal is to never need to use this survival gear but it's nice to have these items in our survival bag, just in case.

The only drawback to the Ready Store is that the minimum order is a box of twelve MRE's. My survival bag for the plane will take six of those, enough for three days food for Mary and I.

As for the remaining six I may distribute them, one each for the car emergency bags, and one or two in the daily flight bag I keep with a medical kit in the baggage compartment of 3 Tango Charlie.
As an update after taste testing....there was no water pack in the MRE. I emailed the company to let them know.

I also contacted Earthquake Management, located in California, to order my new water packs.  This company is a distributor for Mayday Survival gear. They do have a minimum order of $25 but I found an emergency pack I want to put in each vehicle and they only cost around $13 each. 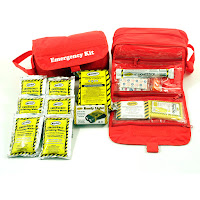 While placing my order for the new water packets the owner suggested keeping the expired water packets and using them for wash up, thus not wasting good water needed for drinking. I then asked if the expired watered is boiled can I use it for cooking, she said she honestly didn't know but would check and provide me an answer.

So that is my survival gear update. I'm good for five more years of being ready, but, hoping never to need the items I reviewed and purchased.

I understand that being out here on the east coast it's highly unlikely that if you make an emergency landing that you will be on your own for days. That's a good thing. I also increase my odds by getting flight following or being on an instrument flight plan and talking to approach. What I am concerned about is our future travels and flying over places where there is vast emptiness. I should note that our 406 mhz ELT should also increase the odds of being found.
But what if?