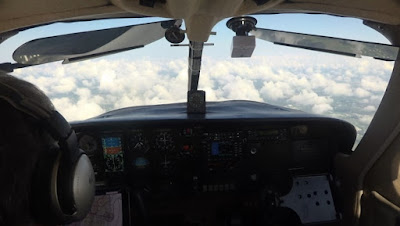 It was a quickly put together fly-in breakfast meet through Facebook. We had four planes and five people attending. Chris and his bride made the hop in their V-tail Bonanza, Les arrived in his Sundowner, Bob in his 172, and me in our Commander.

It has been 25 days since I last flew and it showed on the flight from OCMD to Cambridge. The return trip was normal, checklist items flowing and no feeling of what did I miss.

I was above the cloud layer at three thousand and had to find a hole to descend through to make my way towards the pattern for runway one-six. The pattern was an absolute beehive of activity, crazy busy, planes everywhere.

I had to go around due to a Cessna still on the runway when I was just coming over the numbers.  I side stepped right and climbed out. The rust was showing. The muscle reflex of Cram, Climb, Clean, Cool, Communicate wasn't there. Oh I went full power, left the gear extended, and slowly retracted the flaps. I didn't touch the cowl flaps. Somehow I did manage to communicate. The DA was around eleven hundred and 3 Tango Charlie was dragging around the pattern.  Ughh...not my best display of piloting skills.

Four of us waited for a good amount of time due to limited seating, a full ramp of planes, and some locals. When we were finally seated it took some time to take our order, which worked out perfect for Bob, who had a late start due to fog.
Bob landed just before they took our order and he walked by the restaurant windows just after we went around the table. I told the waitress he had to run out to his plane and was coming right back. She quickly asked did he leave his order and I gave the deer in the headlights look then said he did not. Busted!
The conversations were fun, with multiple bucket list destinations discussed for each of us. I think we were all in agreement we want to do the Bahamas.
We finished up and headed back out to the ramp, still busy with planes. I climbed aboard and got the fan turning, despite a bit of a long crank. With a short sputter and added fuel pump 3 Tango Charlie caught and came to life.
It was a conga line getting out, I think I was third. I rolled on to runway three-four and made a longer then usual take off roll but was soon climbing out. I actually think there was a slight tail wind but I followed the line out anyway. I departed the area on the downwind and pointed for Ocean City.

I skirted around Salisbury to the north wanting to remain below the cloud layer. I didn't want to climb above for the last twelve minutes of flight time to OXB.

I made a nice landing at Ocean City and tucked 3 Tango Charlie back in the hangar. It felt good getting back in the plane and I hope to build more time as weather permits. This weekends trip to meet the North East Flyers will be a no go for me. There is a Airshow TFR in place and I wont be able to get in until late in the day.
Posted by Gary at 4:11 PM