I posted on FB asking if anyone was flying in the tri-state area for a breakfast run this morning.  Bob C posted on the North East Flyers group.  Chris was on board with his beautiful V tail Bonanza and I was flying our magic carpet, the Commander.

The plan was to meet at Hammonton, NJ (N81) at 9:30ish.  I could have left sooner but I needed fuel. The fuel truck wasn't up and running until 7:45.  The Commander took on 17 gallons, adding to what was on board (40 GAL) for a total new total of 57 gallons.  After tugging 3 Tango Charlie out we headed for runway three-two.  It was busy this morning, the jump plane was on its third load of dropping meat bombs, and the transient traffic was picking up.

With my run-up completed I rolled for three-two and climbed out.  On the last flight I missed setting the HDG on for the autopilot, even after checking to make sure the compass and Direction Gyro were in sync. One should have this HDG set in case the AP somehow comes online, it's good to keep flying on the correct heading without any sudden turns or surprises.  Today I made sure that task was completed.

I climbed out fat dumb and happy to be flying on a beautiful day. Unfortunately my rust was showing as I missed my typical one thousand foot checks leaving the pump, and landing lights on. Duh! I mentally scolded myself needing to get in the game. I noticed my airspeed was slow, even with the nasty headwinds I knew I should be climbing faster. Ok, get the scan going. Manifold pressure and RPM's locked along with mixture near full rich. Hey, what are those three green lights doing on?  What a dumb butt, let's retract the gear and the one notch of flaps.  Wow, so embarrassed to even share this.

Anyone that knows me and my flying can tell you how I run my cockpit. Sigh...Today wasn't pretty on the first leg. Somehow I manage to cross the bay and communicate with Atlantic City Approach.  I had been monitoring but I heard Chris's tail number and approach say they didn't hear them check in, meaning another plane.  I knew he was looking for me so I asked for flight following and approach passed along a message that the destination was changed. I had already noticed Chris flying south about my three o'clock, he was headed to Cape May (KWWD). I advised approach I was making a 180 and now headed to WWD too.

It was windy today and I had to dance on the rudder pedals to make a nice landing on runway two-eight. It felt great shedding the rust and getting back in the game. Gusty landing with a crosswind always provide a good test of skills and a workout. 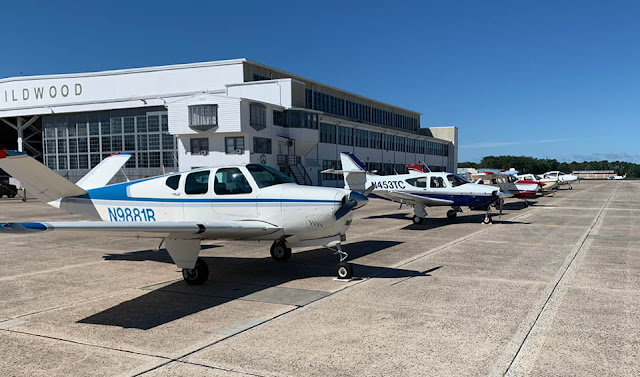 There is NO indoor seating at Cape May, the party is strictly outdoors. I guess Chris and I waited fifteen minutes or so then secured seating in the shade. The place was really busy but the service and food were excellent. 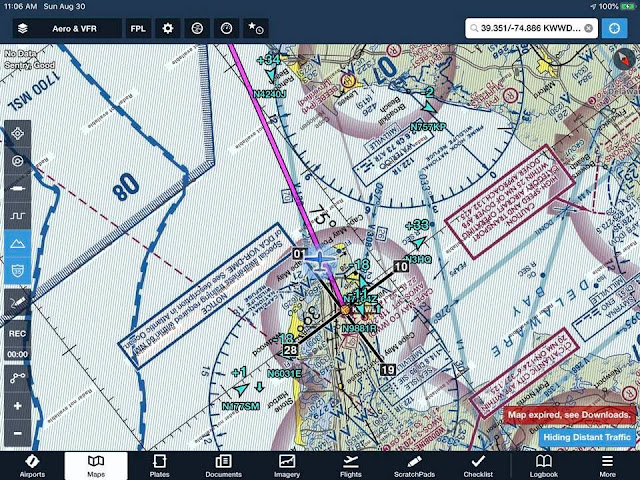 With breakfast complete we headed back out to the ramp. There were plenty of planes lined up and still a few arrivals.  Chris and I saddled up and taxied out for our separate destinations. I taxied out behind a Cessna who turned off on a taxiway for his run-up, I went to the hold short line. I launched for home and flowed through my checklist items, remembering gear, flaps, and thousand foot checks. I settled in for the Bay crossing, watching banner tow planes shadowing the shoreline.

Ocean City was busy with the jump planes still buzzing and other traffic mixing in for runway three-two. I swapped communications with a Cirrus on the practice GPS 32 approach as he was about six miles out.  I could have easily turned base and landed but I didn't want to mess up his approach.  I advised I would follow him, number two for the field. The cirrus pilot then declared it was a low approach only.  Oh well, I'm flying, it's fun, and I can fly over the water a few miles off shore and at least check out all the boats.

Overall a fun day once I cleaned up my procedures. Not flying every few days has really built up the rust and I need to keep flying to shed that. I hope to get in the air again this week.