Mary and I decided to get Ziva out for a run while I checked on the plane today.  I know I should have gotten my lazy butt out early and go fly but I just didn't feel like it. My motivation with nowhere to fly can barely move the fun meter off the peg.
With the tropical storm Isaias heading up the east coast we thought it best to turn loose the beast. As we approached the airport I noticed a plane at the end of hangar row where accident aircraft get parked.  This bird looked nose low and I was afraid this twin may have some issues.  I was hoping I was wrong and it only needed a nose tire or air. 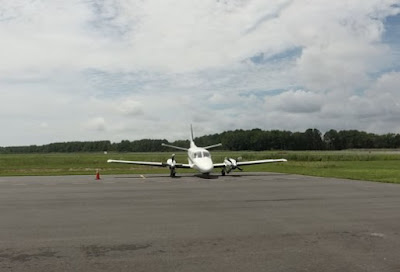 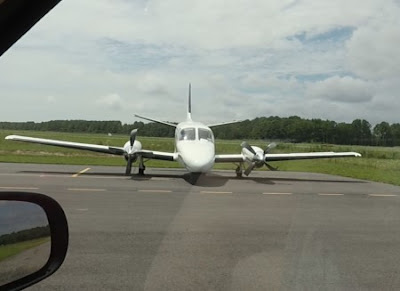 Once in the gate I swung by for a closer look and sure enough both four blade props were curled and the nose gear was barely extended. As a matter of fact the left main wasn't looking much better.  All I could think about was $ cha-ching, two tear downs, gear repairs, and maybe belly repairs too. It was painful to look at.
Once at the hangar Mary poured Ziva some fresh water and let her run. I had my nose in the air and ears perked, I heard planes.  The cirrus I taxied by, sitting between the hangars, was now making its way to the runway. Out in front of the cirrus, on the runway parallel taxiway, the jump plane was making it's way to runway one-four at a brisk pace.  Following the jump plane was a CL30, Bombardier Challenger 300 and the cirrus held short but finally joined the procession.
As soon as the conga line made their way to one-four and launched, I heard another aircraft spool up. This plane was also heading my way. This time a Beechcraft Super King Air 350 taxied by.
I enjoyed my plane watching and then some play time with Ziva. Mary and I packed up, I secured the hangar and we went off in search of lunch.  Today's selection was an Italian sub/hoagie from Southside Deli. It was very good. 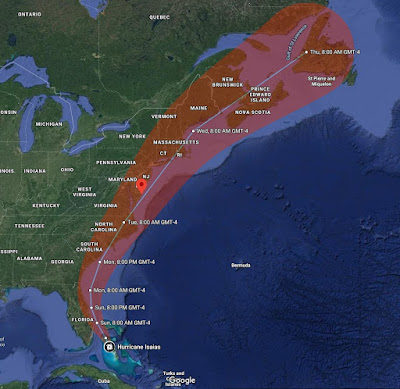 With the wx forecast looking pretty nasty over the next few days I am planing on a Friday early launch for some air time. Lets hope the wx clears and I am motivated.
Posted by Gary at 3:35 PM