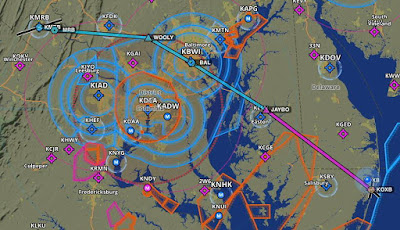 I swapped text messages with our friend and fellow BAC member Les G.  Les asked if we were available to meet he and Nahia for lunch at Katara's Crosswind Cafe' in Martinsburg WV. I initially had to decline because I was planning a flying day on Monday that would be five hours worth of hops and I needed to remove my backseat in the Commander today.  This is not as simple as the Sundowner, which was to remove two knurl locks and pull the individual back seats. The Commander seat removal entails removing bolts from the back and front of the seat, the whole bench seat, and safely removing the awkward unit from the plane.

I received a text this morning cancelling the Monday flight, thus no need to remove the bench seat. Mary and I were now free to roam about on a beautiful day.  There are two additional destinations available today; the Northeast Flyers were headed to Nantucket, MA (KACK) and the Beech Aero Club was headed to West Hampton Beach, NY (KFOK).  Since we could not leave the airport environment at FOK or ACK we decided to meet up at Martinsburg with Les and Nahia.

I needed to take on fuel so we headed over to the airport early, unfortunately not early enough. Instead of getting in the air by 10:30 we were rolling on to runway three-two at 10:50.  Today's flight was into a brutal 35 knot headwind and we trudged along at 104 knots. The saving grace was a silky smooth ride. 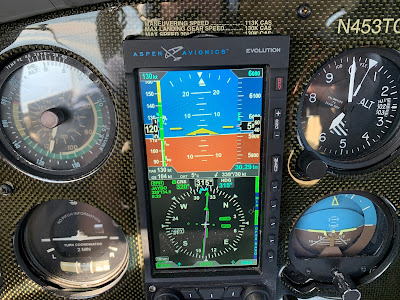 I picked up my clearance with Patuxent approach and enjoyed the ride, and being able to once again fly in the system. Potomac approach missed a traffic call out but our ADS-B and TIS-B on the Garmin 480 switched screens and displayed the distance rings and approaching aircraft flashing yellow.  The traffic (6MH)passed overhead with four hundred feet between us.  Mary and I were not happy campers. 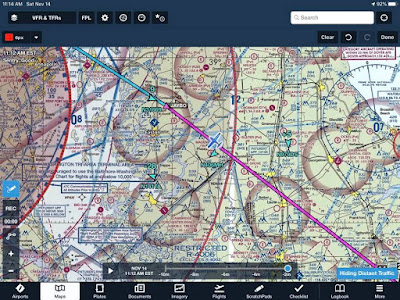 The rest of the flight went without issue as we were passed from sector to sector. I eventually cancelled IFR and switched to the Martinsburg tower, confirming my number three to land position. I made a nice landing and taxied to the restaurant ramp.

The food and service at the Cafe' was very good and the restaurant was busy. The four of us enjoyed our conversation and company. It was fun to be out of the house, flying, and catching up with friends.

We decided it was time to head for home and made our way to the ramp. The airplane photos were taken then we all climbed aboard.  Les was first to taxi out while I picked up my IFR clearance that would make the Baltimore class bravo easy peasy, a smooth transition. 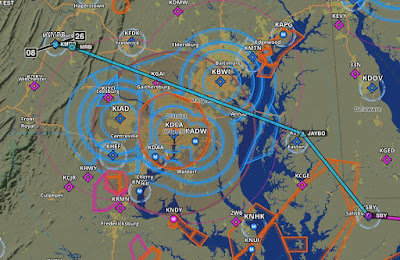 I programmed the GPS for the return trip adding only the MRB VOR as a single waypoint. Once climbing out I would complete the remainder of the amended clearance. After wheels up I turned for MRB and was quickly handed off to approach. My route was somewhat amended now given vectors to fly heading 090° this was fine as I entered the remaining route on the Garmin 480. Approach advised they have an amended route advise ready to copy. I acknowledged and noted the changes; direct WOOLY BAL JAYBO KOXB.

As I chugged and plugged the GPS would not accept WOOLY, very odd. Ok, let’s try this again from another angle. I deleted the active plan and started with a blank page, I am really missing my Flight Stream 210! Once again a no go on adding the intersection. While working through the GPS issue I crossed the MRB VOR and was now pointed to WOOLY using Foreflight for my heading.  At this point I turned the GPS off and then on again to give it a fresh start. This worked out fine as I re-entered the flight plan without any problem. After checking the route and switching to the map screen I was given another route amendment. This change was once crossing WOOLY fly a heading of 100° 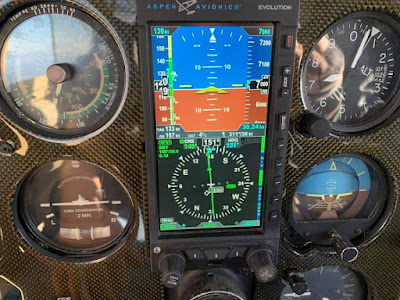 I enjoyed the 30 knot tailwinds and followed the new plan. Now flying the new course heading I passed directly over midfield at KBWI-Baltimore. Approach then directed me to fly direct Salisbury (SBY).  This is where I was handed off to Mister Happy controller out of Potomac. I waited for a break in the chatter and checked in, only to hear another aircraft as I unkeyed. Mister Happy chastised us all, asking can we hear ourselves all talking at the same time. Well, I thought to myself, no, if I key the mic I actually can’t hear everyone else. Mary called him miserable, I agreed. When it was quiet I checked in again, and received confirmation.

We continued across the Chesapeake Bay and expected to be handed off to the next sector. I told my bride multiple times that Mister Happy forgot about us. A good bit of time passes, now just five minutes west of Salisbury, and again I said to my bride he forgot us. I was now well past the point of being handed off to Patuxent but I remained patient. I hear 3 Tango Charlie and anxiously await my hand off, finally I was handed off to Pax and felt we were in much more capable hands. 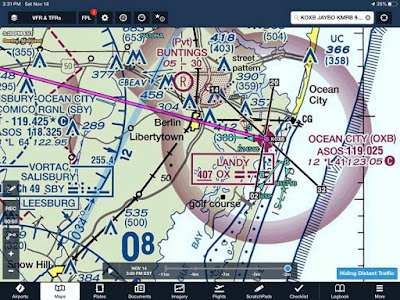 Pax turned me direct Ocean City and once I had the weather and now less then 15 miles out I cancelled. Pax advised multiple targets around our destination and then cut me loose as requested. I made my calls at ten and five out, eventually entering the left down wind for three-two. When I turned final the aircraft at the hold commented "nice bright lights on that plane". That’s reassuring that the lights are so visible in day light. He again commented "money well spent". I thanked the pilot and continued in making a nice landing, and the first turn off towards the terminal ramp. We were home.
Posted by Gary at 11:30 PM