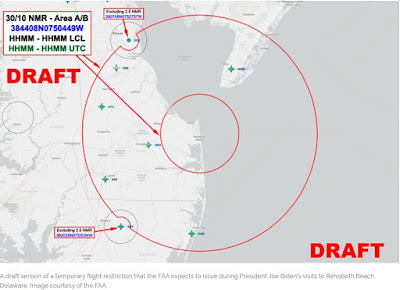 It's only a matter of time until this TFR will be up and running when our president decides he needs beach time. Yes, I could go on a political rant, but, at this point, it's exhausting.  Instead, I will leave it to the aviation content only. 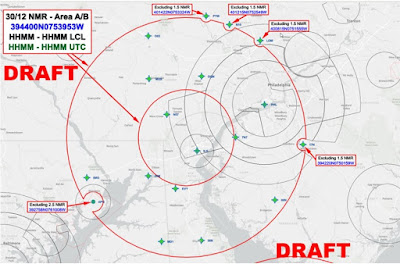 I have read that it's possible that there will be gateway airports made available for access to New Garden Airport and New Castle Airport while the Wilmington TFR is in effect. However, the Transportation Security Administration has not yet provided any information on whether this will happen or which airports might be selected to serve as gateways. I certainly hope this happens so my fellow pilots and friends based at New Garden and Wilmington can continue to fly. Having a gateway airport will also provide Mary and I access to ILG for family visits, which always beats driving.
Gateway Airport?
There are occasional exceptions that will allow certain GA aircraft to penetrate the inner ring. In some cases, the United States Secret Service (USSS) will agree to set up “gateway” airport(s), at which GA aircraft can be screened before proceeding into the TFR. In other cases, GA aircraft are permitted into the inner ring only after obtaining TSA waivers, sometime used in combination with gateway airports. However, these exceptions are relatively rare and are normally made for TFRs that impact multiple airports for several days.
VIP TFR Operating Restrictions
No UAS operations are authorized in the areas covered by this NOTAM (except as described).

Except as specified below and/or unless authorized by ATC in consultation with the air traffic security coordinator via the domestic events network (DEN):

B. For operations within the airspace between the 12 nmr and 32 nmr area(s) listed above, known as the outer ring(s): All aircraft operating within the outer ring(s) listed above are limited to aircraft arriving or departing local airfields, and workload permitting, ATC may authorize transit operations. Aircraft may not loiter. All aircraft must be on an active IFR or filed VFR flight plan with a discrete code assigned by an Air Traffic Control (ATC) facility. Aircraft must be squawking the discrete code prior to departure and at all times while in the TFR and must remain in two-way radio communications with ATC.

I sympathize. It's been the same for people living near any of these places where whoever is POTUS at the time frequently travels. I planned my tailwheel endorsement around Trump's New Jersey golfing patterns because those TFRs shut down the flight school I used. But I had it easy The aviation communities based in that region of Jersey or near Mar-a-Lago or near Chicago when Obama was in office...they've all suffered for the "higher purpose" of security theater.

And I don't think this has to be a political discussion at all. It doesn't matter who the POTUS is, the TFRs follow them around. It's the system that causes the hardship, not whoever is president. It's not like Bush, Obama, Trump, or Biden were/are setting out to disrupt the lives and business of pilots when they travel. It's a crappy system. If we truly want to protect the POTUS, aren't there better ways than drawing a bullseye around them on an aeronautical chart? It seems like there might be.

Maybe political rant wasn't the way to express myself. This increased protection for ALL presidents is out of control. Camp David has a smaller TFR then Wilmington or Rehoboth or any of the past presidential TFR's. The secret service is killing business....and its really not providing that much, at least in my eyes.