Sunday morning and the wind is blowing. The sun is shinning, the temps are warming up and I'm ready to fly! We made plans yesterday to fly south to Cambridge Dorchester Airport, KCGE. This is our second stop here and it's been way to long to get back. This place is one of the best for breakfast, Mary and I think it ranks right up there with the Cornerstone Grill at Millville.

We invited my sister (Denise) and brother-in-law (Dave) to join us. Denise flew with us once prior and this will be Dave's first. He has flown in single engine aircraft when in the scouts many years ago. We picked them up around 9 am and headed to the airport. I flew 679er yesterday and burned off about 14 gallons, both tanks were equal, sitting at the tabs. 679er fired up with no hesitation, she was ready to go. Our taxi instructions were to taxi to one niner via kilo, hold short. I acknowledged and we were off.

As you can see by the Wilmington METAR the winds were from 260* at 15 gusting 22 knots on take off. It was indeed cloudy above with a scattered layer at seven thousand and some dark clouds. I stayed well below riding along at two thousand five hundred which provided a detailed look at all the points of interest. We crossed the C&D canal, picked up flight following with Dover Approach and was immediately told to squawk VFR and contact Potomac. That exercise was a waste of a 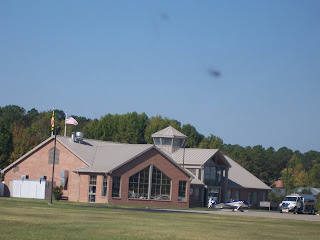 ir time and effort but if you want following you have to play the game. I called Potomac twice and finally got squared away with the code and had top Ident twice, it was one of those radio days I guess.

I canceled flight following and switched over to Cambridge traffic to announce my position and intentions. traffic was light as we entered the down wind base and final for runway three four. I squeaked a landing and taxied out to Kay's at the main terminal building. We parked along side a Grumman Tiger and together we owned the ramp. As we walked in the Grumman pilot walked out to his aircraft, 679er was holding the fort alone. The place was really busy with locals but we did manage a seat by the ramp side windows. Food was excellent as always. I had a meat lovers omelet, Mary had sausage and gravy, Denise had a vegetable omelet and Dave had an omelet. Bring your thirst since the ice tea comes in a quart mason jar and the coffee mugs are huge (good for those soup and grill cheese rainy day meals).

Tummy's full we headed out to the ramp. I checked my fuel load and climbed aboard followed by the back-seaters and Dave took the co-pilot seat. Winds still favored three four so we taxied out after letting a Comanche and a few RV's taxi in. My run up completed we 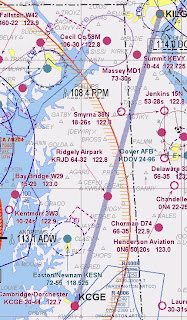 announced departure and 679er was off. The winds had indeed picked up and we were facing a stiff cross wind, switching to a tailwind at times really giving us a ride. I had to throttle back more then once to keep outside the yellow arc. We hit some really good "pot holes" as Rob's instructor called them and they gave us some lift in the seat of our pants. I couldn't wait to cross the canal and call the tower to let them know we were coming home.

As I keyed the mic the bumps had my voice making funny sounds as if tapping my throat....I started to laugh as I made my call. Archer 679er is 15 south inbound full stop with Gulf, bouncing along at two thousand five hundred. The reply was you can bounce along and report a three mile final for runway one, count as many as you like,I acknowledged. I had the runway in sight and worked to maintain my alignment just left of center. Winds were really kicking now as I had called my three mile final and received the cleared to land. Wind check was 300* or 310* 23 gusting 33 (38 mph) that works out to about 26 knot 70* cross wind and 10 knot headwind. Hang on to your hats, snug the belts was my thought but I kept that to myself. Left wing low into the wind and keeping my speed up around 70 knots I nursed 679er over the fence. I now added my last notch of flaps, worked the rudder and throttle like the wizard of OZ (picture the scene where he says, pay no attention to the man behind the curtain). Left side chirp, hold it there don't stop flying, more stall horn moan and then the right side immediately follows. Flaps retracted, throttle at almost idle and mixture leaned, we're home. I stayed on with the tower as directed while we taxied back on Kilo. I was very happy with that landing and it made for a perfect ending to a nice weekend of flying.

Nice Write up,.. I'll have to add that place to my list of places to fly for a meal. Sure was much more windy today than Saturday.

Thanks again for Saturday flying, was a lot of fun.