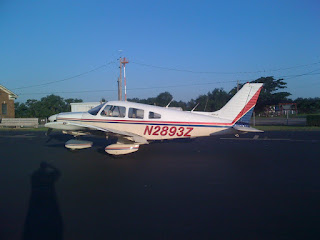 I turned in a leave slip so I could join Mike B in taking Jeff's Archer, 93Zulu to Cecil Aero for an oil change and compression check required for his ECI Cylinders. Mike and I planned to meet up at Wilmington on the Red Eagle ramp around 6:30AM. I was up and on the road but had to turn back to update the Jepesen data card. I guess I rolled in a few minutes late but we both knocked out the pre-flight in the morning chill. 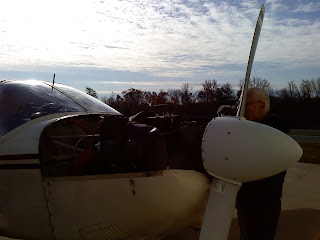 I flew the first leg to Delaware Airpark, a short hop on a beautiful morning.  I shot the RNAV GPS 27 approach and was doing pretty good right up until Mike said to look up.  Yikes! I'm high and almost at the airport.  I overflew the airport and entered the pattern with a pretty good landing.  Once taxied clear Mike pointed out that I did not monitor my speed close enough on the approach I was over 100 knots and this approach is close coupled.  The distance between fixes is only 2.5 miles. 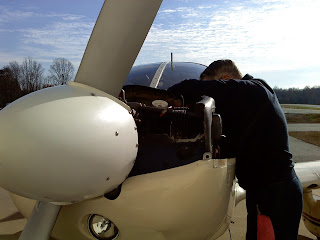 I secured 08Romeo and Mike started the pre-flight for 93Zulu. The Archer needed fuel so we took care of that and then pushed back to clear the pumps for one of the flight school planes needing a drink. Last pit stops completed we started up and taxied for departure. 93Zulu climbed out in the chilly morning air possibly looking forward to stretching her legs with owner Jeff but instead heading for the short hop to 58M for some fresh oil and a filter. 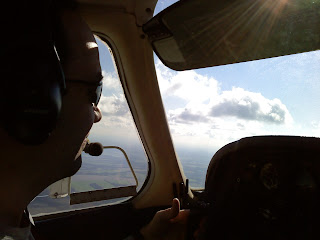 Roger and Frank jumped right on the compression checks then got the oil draining. Jeff wanted a mid stream sample to send off so that was taken care of too. Compression checks looked great 76/78's across and the fresh Phillips XC 20w50 golden honey was flowing. A start up followed by a leak check was completed and 93Zulu was ready to button up. Jeff wanted a check of the nose gear strut and that was also addressed as good to go. 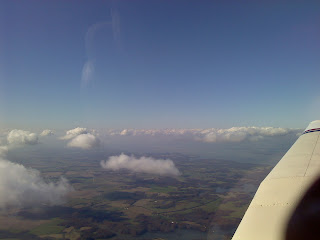 Mike and I saddled up for a breakfast hop to Kay's at Cambridge airport. Mike picked a hole and climbed above the scattered cloud layer at 4,500 but as we headed south we needed to climb to 6,500 to remain clear. We gave some thought to getting a pop up to descend through for Cambridge but the garmin data card had just expired yesterday. No problem, picked a big hole and descended through maintaining VFR. I know, we could have still asked for the pop up and filed as /A (DME and Transponder with Mode C), but the layer was scattered and really not worth the hassle with Potomac approach. 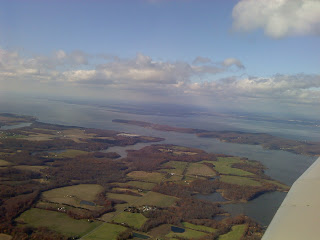 Mike made a nice landing and a smooth taxi to the ramp. There was a citation, cirrus and a Cessna straight tail  tied down and we found a spot to join the crowd.  The restaurant was busy as usual but we were seated quickly. Lunch was great and the large jar of sweet tea hit the spot. Mike took on some additional fuel and squared up with the attendant while i strolled outside. A really sharp looking Ercoupe had pulled up and I noticed he had landing lights on his main gear. I wandered over and asked if his name was Bill, thinking he was the Baltimore Bill that I had seen on the Purple Board for pilots forums, he was not. Great guy to chat with and he didn't mind me taking a few pictures of his landing lights. 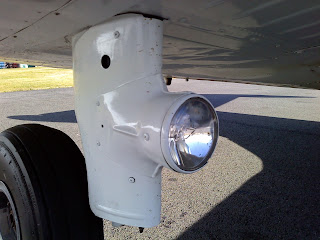 Mike and I once again saddled up for home with a slight detour to shoot an approach into Georgetown, KGED.  I was safety pilot and eyes outside looking for traffic as Mike flew the gauges. I made the radio calls and Mike got us to the runway, another very nice landing. It was a quick turn with calm winds so we just re-entered the runway, now departing on two two. 93Zulu climbed out and we pointed towards the Delaware coast along the Bay. I picked up flight following with Dover approach and Mike shot the RNAV GPS 27 approach into 33N, he was on the money. 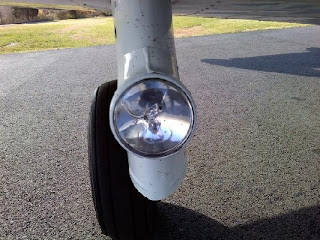 With 93Zulu secured we walked across the ramp to 08Romeo.  I got to chat with the Airport manager and co-worker Ben C for a bit the we climbed aboard for the hop north.  Mike took this leg back to Wilmington since he wanted to shoot the ILS RWY 1 that is back online now that the EMAS project is complete. I did the radio work as we headed north and Wilmington was busy. Switching over to Philly approach to see if we could get vectors for the ILS was useless as they were really busy. Back to Wilmington's tower and advise position and intentions for a full stop landing. I didn't recognize the controller on today, must be a new guy because he was a mess. He was confusing airplanes and tail numbers really bad and had called us out as traffic to ourselves at one point. You can listen and decide.

Audio from the KILG Tower

Our initial call is around 4:50, at 6:40 he calls out another sundowner as traffic to us in the only sundowner in the area. At 7:50 he clears us for at/or above 1000 then comes back correcting us (a bit excited) to 1500. Around 9:40 or so we are cleared to land and Mike is now on the radio, he is so much calmer than I am. We are called out as Cessna something, more confusion. Then once landing, around 11:35, he gives instruction for Cessna right turn on Delta. We landed a bit long to help keep the flow going and have to much speed for taxiway delta, we exit on taxiway Kilo.  It was crazy.

We walked up to the pilot of the Archer behind us, who also is located on the red eagle ramp, and chatted with him once we had secured 08Romeo. He understood and mentioned how many times the tower confused his aircraft and routed him multiple directions at one time. There was around 6,000 feet of runway behind us as we cleared runway one and yet he made the Archer go around.  This sound track is going into the files.
Despite the Wilmington Tower mess it was a great day to fly!
Posted by Gary at 9:51 PM

Man, that audio was pretty hard to understand. Glad everyone figured things out and kept things moving safely.

LOL...as hard as it was to figure out sitting there at home listening.....imagine sorting it out with traffic and trying to get in to land.

Something to be said for uncontrolled airports!

Yup, sometimes I think I prefer the NORDO experience that is Stewart. ;-)