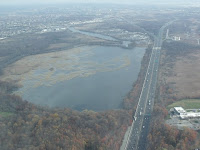 The wx was not looking great and some folks
did cancel due to the forecast winds but I think the haze/muck was worse then the wind.  I asked Vince if he wanted to attend and he agreed to meet me at the plane around 10AM.  I had ordered fuel to make 20 gallons a side. I figured a twenty minute trip to Wings, KLOM to pick up Dave and then thirty to Lancaster, KLNS for the meet up.  Weight and balance allowed 35 gallons for our combined weight and at start up I had 37 left on board.  With the taxi out and run up burn @1.3 gallons we would be perfect for w&b. 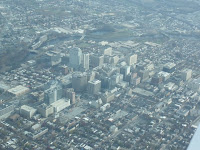 We climbed out of Wings minding the "no turns" until 1,300 feet noise abatement and then proceeded on course.  Dave had a chance to look over the iPad since he is thinking about making the purchase and Vince was back seat clicking off pictures.  Dave did fly for a bit and made a few turns to get the feel of the plane.  Mind you Dave owned and flew a gorgeous V tail Bonanza (my dream plane) but recently sold it for a fun toy the DeHavilland DHC 1 Chipmunk. 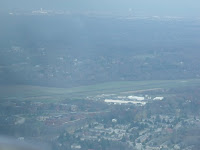 We didn't spot Lancaster until,maybe eight miles out and received clearance to land runway three one.  I guess maybe eight of us showed up for lunch and we fit in one of the side rooms gathered around a large dining room type table, more of a conference room table. Service and food were very good and the conversation moving quickly in many directions. As a group we decided to invade the pilot shop, most walked, I taxied 08Romeo down taxiway A and on to their ramp. I did pick up some lubricating spray to keep in the plane and some spare double A batteries for the cleaning kit bag to have for an emergency. 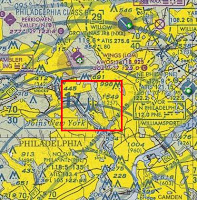 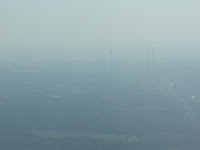 We all said our goodbyes and headed out.  I was first off since i had taxied most of the way down the parallel taxiway to runway three one. I picked up the ATIS and called ground then turned into the wind for my run up. Everything looked good and once cleared we launched off three one, right turn on course approved. I flew for a bit then turned it over to Dave. With a sweet tail wind of twenty knots we saw ground speeds of 132 knots. It was a quick trip back to Wings. 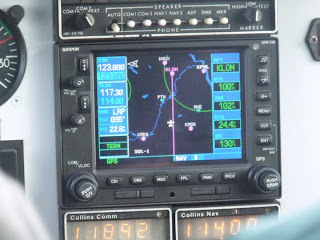 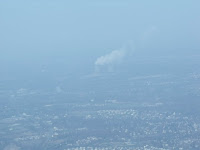 It was a short stop for Dave to climb out and Vince to climb up front. With that complete we were ready to taxi out.  Clear of traffic I announced and got 08Romeo rolling down the runway. It was all haze and muck on the way home with not much to look at. Philly approach was very quiet too. One nice view was the sun reflecting off the Chesapeake Bay offering up a warm red glow, that was the highlight coming home. My call to Wilmington had me entering right traffic for two seven. A super smooth landing and roll out for taxiway M and we are home.  A fun day with good friends! 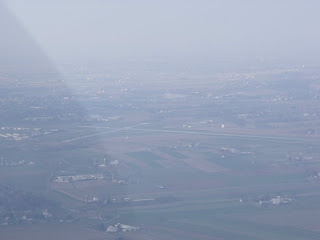 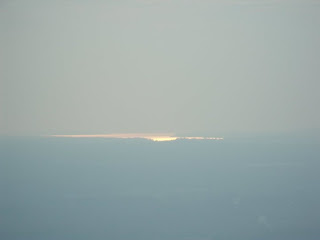