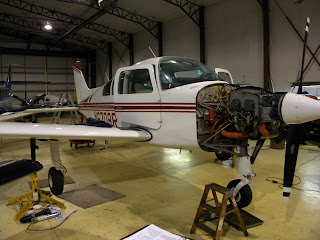 I hit the road early with a few tools, lunch and my flight bag.  I always get excited at annual, the chance to work on the plane, play with power tools and hang out with the guys in the shop.   I made a stop for donuts  for the guys and a large tea for me.  Frank was already in the shop making coffee and answering the phones, it seems to start early. Keith and Stan rolled in and after the morning coffee we got started.
8Romeo was quickly coming apart.  Keith and Stan did the compression checks (79 PSI each cylinder)as I was opening up all the inspection covers. Each wing has four inspection covers with eight or ten screws holding them in place.  The gascolater has a cover along with the wing center spar.
I moved to cleaning the plugs. The bottom set had a lead build up, more than I remember from last year.  I used a dental type pick to clean out the deposits then a quick scrub in the parts cleaner to remove the old anti-seize from the threads.  Next was a trip to the bead blaster and time to play with the machine.  Once the plugs are set inside I lock down the door and get the air flowing.  There is a foot pedal to get the fine grit blowing and it's fairly responsive.

The next phase of the plugs is to prep for install.  New copper washers  for the top plugs and none for the bottom since they have the CHT washer probes. I also gapped the plugs and that was a first, for airplane plugs, God knows I did more than I care to count for cars. The gapping tool was interesting, I attached a few pictures. It was sort of like a mini press that only needed gentle pressure.  How do I know you wonder, I gapped a few to tight and could not pass the .015 gap gauge through the plug.
With the plugs and wires complete I moved on to other fun stuff. Stan finished with the nose wheel while I buttoned up the inspection covers. The vacuum system filter needed a change and obviously the designers at Beechcraft had a sick sense of humor, who the heck put that there? Keith took the under panel position and I took the topside to double team the vac filter, Keith also changed the relief valve filter. Day one comes to a close and we pack up for the day and clean up in prep for tomorrow.

Is it 6am already? Another early start to my day with a large dunkin tea in hand. I didn't pack lunch today, instead, I planned on a treat at the local deli for an Italian hoagie, sub or whatever it's called where you live.
I arrived at the shop ready to go and Frank already have the coffee on. Everyone rolled in and got right to work.  Frank and Paul were working on the Cardinal parked behind 08Romeo and they were just about done. I buttoned up the tail cone, installed both batteries that checked out fine and closed up the interior. Keith cleaned up the engine room and then oiled the chain that connects/drives the yokes as the last cabin item "to do". I helped hang the bottom cowl and then finished up the touch up on any scratch or chip on the plane. Roger had all three of my colors in stock since the shop cracked the wing tip my very first annual in 09.

I did some clean up, including the belly, and made sure any finger prints were removed. Keith and I went over the check list of annual items. Keith told me to plan on new brake hoses next year for the mains and I think we will also replace the rubber door and baggage seals since we found a few areas just starting to crack. The last two remaining items that should be in today is the ELT battery and the Bracket air filter.

08Romeo was pretty much complete and ready for her run up and leak test. We all moved the planes around so my Sundowner and Paul's Cardinal could perform the required tests. Both aircraft did fine and we followed up with some high speed taxi brake test to burn in the new set of brake pads. I taxi to the main ramp area and secured 08Romeo complete with her covers, I'll be back for her tomorrow.

I decided to head for home and get some work done around the house. Mary and I swapped text messages and decided that we will drop off my SUV at Wilmington Airport tomorrow morning then she can drop me off at Cecil Aero before heading to work. Another annual in the books!

Wow! Nice simple annual. I love it! My sqwak list is getting smaller and smaller. I hope my next annual is more like yours.

Cool. I wish I was better with tools and my hands. I trained as an aeronautical engineer, so I can calculate lift and drag, stresses and strains, but that doesn't help with the practical skills needed to do your own assisted annual. That's why I pay so much, and my A&P has a new boat......

Always enjoy your annual annual post, Gary. Love how much you help out with everything. Being such a hands-on owner is a huge asset!

My "hands on" are really cut up and sore, getting old is not for sissies!

Had a blast! Made a quick flight this morning to p/u my ELT battery that came in last night. placard removed from panel and 08Romeo is good to go.