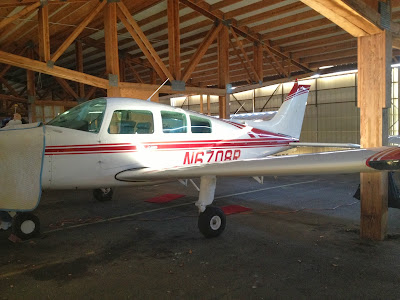 Mary and I decided to leave our airport car in Ocean City MD at KOXB.  So, this week we planned on a flight to the beach in order to top off the fuel, give the car a good run then cover and add a solar charger. 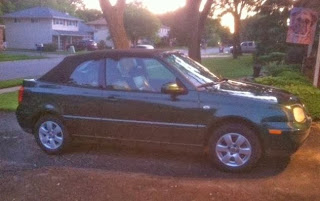 Early to bed on Friday for an early morning flight today.  One problem, Mary is so tired from the IV Migraine cocktail  three days this week that she asked me to look for someone else to go. I sent a text to Mike but no response, I followed up with a text to Vince and he was ready to go. 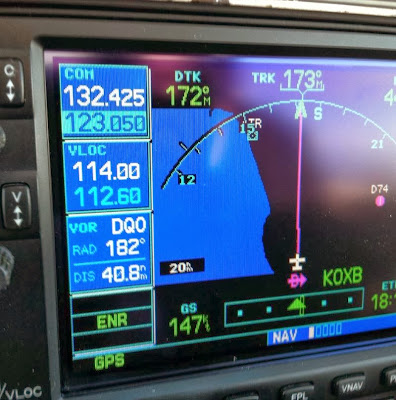 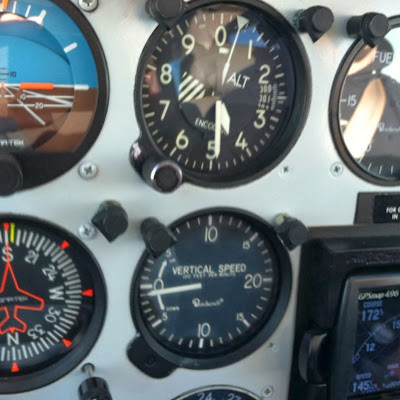 I picked Vince up and we headed to New Garden, I'm still getting used to this commute. The wind was blowing and the temps this morning were hovering around 40*. Vince blurted it out first, "how nice not having to roll up 300' of extension cord and preflight indoors". I couldn't agree more!
08Romeo was ready to fly, however, we first taxied to the fuel pump and added 22 gallons which brought us right around 46 for our total. With the sump completed we fire up and headed out to runway 24.  I added a notch of flaps due to the bumpy runway and trying to get in the air ASAP. AT 1000' I turned on course and handed over the flying to Vince.
It was a smooth flight at 4,500 cruising along at a ground speed of 145+, yes 145+ for the Sundowner. Indicated was sitting on 100 knots, love a tail wind. We monitored Dover for traffic and enjoyed the view riding south. Vince positioned us for a left down wind for runway 32 since winds were 340 at 11 gusting high teens to twenty knots.

I took over on down wind abeam the numbers and squeaked in a nice landing making the first turn off. Hmmm, maybe New Gardens narrow short runway is honing the skills. We quickly secured the aircraft and headed into the terminal.

I paid for the car parking until April 2014, $125 out the window in a blink. We uncovered the Cabrio and took her for a spin wanting to get the temps up to normal operating numbers. I also wanted to top off the tank with high test and add gas dry, which I forgot. With a short run completed and tank filled we secured the Cabrio along with adding a solar charger. 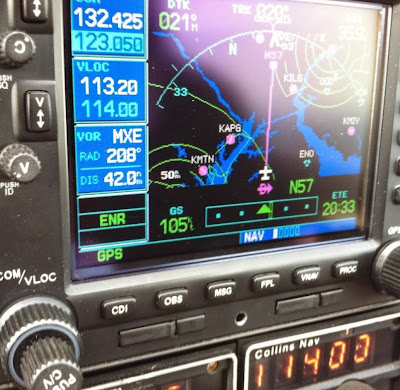 We headed back out to 08Romeo and pointed her towards Cambridge, KCGE. All this work required a breakfast run! The winds were now off the nose and although it was still fairly smooth it was much slower. I did pick up flight following with Patuxent Approach since we were passing below Restricted area R-4006. I crossed midfield to enter the left down wind for runway 34 and followed with another greaser. There was room on the ramp today so I tucked 08Romeo on the back line so we could grab some eats. We timed it perfect and were quickly seated with a nice view of the ramp. Breakfast was perfect, I couldn't finish the cheese omelette or the home fries, to much food. We waddled back to the plane and headed for home. Headwinds were brutal coming north as you can see by the indicated speed of 120 and the ground speed of 105. 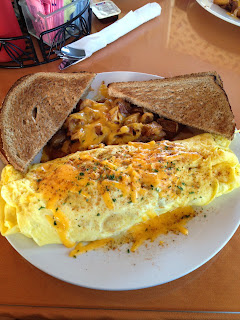 There was a pretty stiff crosswind upon our return to New Garden. I entered the left down wind and extended a bit to make sure I was set for base to final turn. Normally I will not use the third notch of flaps in stiff winds but for some reason I did this time. I needed power to cross the valley and greased another landing for the day.  Vince said it's been my best since coming to N57. :)
Posted by Gary at 6:37 PM

Be careful how you enjoy that tailwind. I flew from Dallas to Erie PA in my Sundowner, enjoying a strong tailwind and GS around 150kts. I really liked getting there by mid afternoon with fewer stops.

Next thing I knew I owned a Bonanza, and I'm not happy unless my GS is over 160 and a day's flying can go from Dallas to Boston or Los Angeles. Such speed is addictive.

D.B., Yes, Mary and I both wish our Sundowner had more speed but it does fit our mission perfectly, for now. There is talk of a Cirrus SR20, I like the Columbia's, but for now we stay the course.