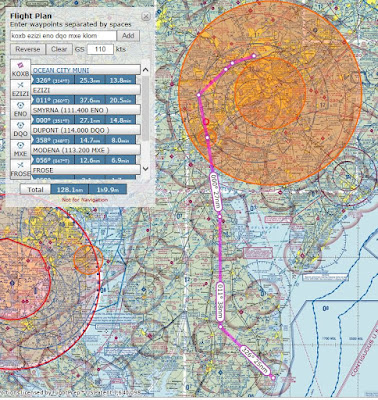 It's time for the annual Wings Fly-B-Q!

We try to make this fly-in every year.  Mary and I are dedicated, in 2009 after my hip surgery Mary drove us to the event and I got my airplane and flying friends fix while getting around on crutches. Thankfully, this year I will once again be on my two feet and not need any sticks. 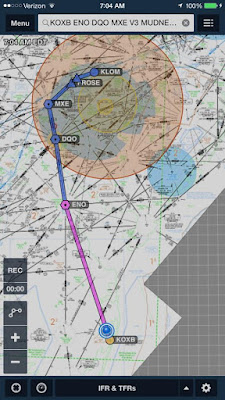 I put together a flight plan Thursday and had some concerns about the possibility for early afternoon thunderstorms rolling through the Philly area.  As Friday came and went the overnight TAF was pushing that possibility later into the day. This mornings TAF for the area (KPNE) showed no signs of thunderstorms and the threat of rain is clear until early evening.

We planned to take Ziva with us but decided to leave her here with the cats to enjoy some quiet time. We figured all that good food and so many people would drive her crazy and it was just easier for Mary and I to enjoy our time with friends. 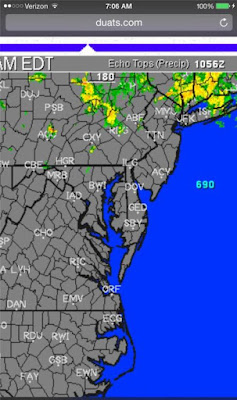 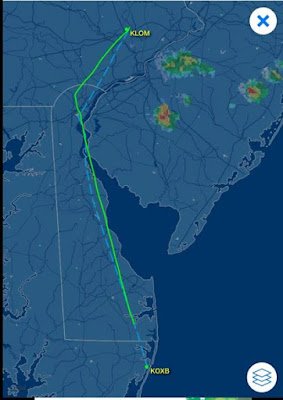 We left for the airport and only made a few miles when Mary said we forgot to load the two chairs. Sigh....U turn time and backtrack to the house.  OK, back on the road and headed to the airport with everything on board. Mary flashed her badge and we went through the gates at 9:20ish.  I wanted to be in the air by 9am.  We eventually get the plane loaded and pre-flight completed.  I sumped fuel and made a final hands on control surface check then climbed aboard. 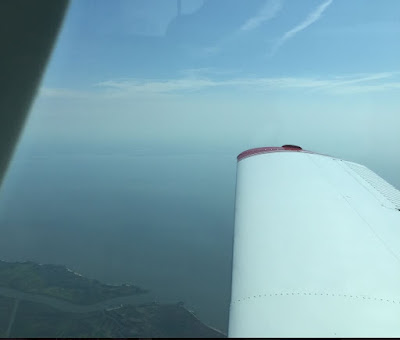 I didn't bother to call and open the instrument flight plan, instead I opted to open with Dover once in the air and closing in on the ATR, Waterloo VOR. We had VFR conditions but it was really hazy. I contacted Dover eight miles south of ATR with my info. 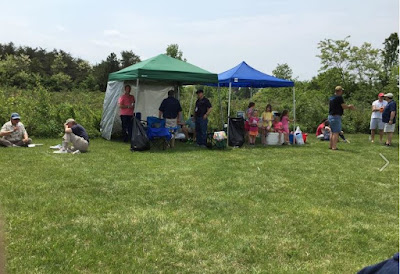 It's that easy. The ride was silent until handed off to the first Philly sector on 119.75.  Philly changed the plan to direct Wings, great! So in my excitement instead of just hitting direct scroll down to the box and select KLOM I instead (insert head slap) hit direct, dialed in KLOM and hit enter.  All of us pilots know ATC...NEVER...changes what they give us (insert eye roll).  Philly hands me off to another sector 124.35 and they change my plan to, you guessed it, direct Modena then Wings. 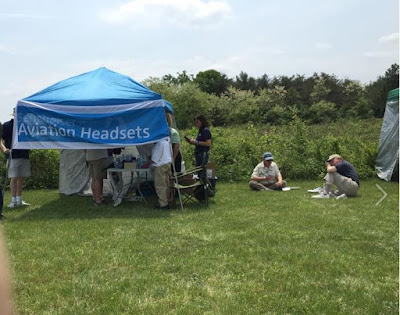 I cracked up laughing. I knew when I cut corners on the last change it would bite my butt, it did.  Not a big deal, I went to the flight plan screen and added MXE then selected direct. I had the wx and advised, then set up for the GPS 6 approach. It's been awhile since I've been into wings and it's so much easier having the info on the GPS. I spotted the airport in the haze maybe eight miles out and canceled with Philly. I shot the GPS 6 approach with a circle to land at pattern altitude, 1500', instead of the approach noted 780' breaking it off just inside of PLAYS the final approach fix. I made a sweet landing and rolled out for the turn to the terminal. I followed the line guy for parking and shut down pretty close to the BBQ action. 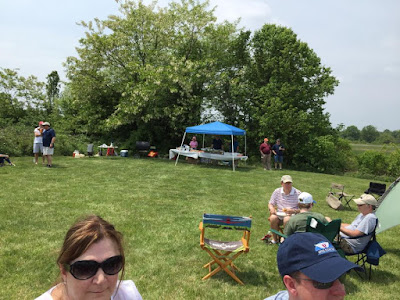 There were seats open at picnic tables so we ended up leaving the chairs in the plane.  We sat with Andy, Adam B and his Bride Jeanine. It was so good to catch up with friends! I got to finally meet Kent's Bride, Kelcey and as always a good time catching up with the master of ceremonies Adam Z and Andrew "Porky" Stanley the master BBQer.  I got a chance to chat with Gary S, Andrew M, Dave H, Anthony, Michael and his Bride  and chatted with Rob S and his three beautiful daughters.  Rob and Becky will be camping at Assateague Island in July, Mary and I are anxious to catch up with their family. 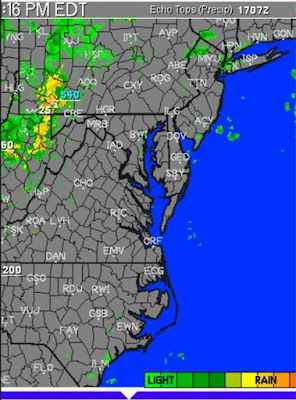 I did keep an eye on the wx and noticed the thunderstorms were moving east and crossing into PA and WVA. I told Mary when the line of storms reach Hagerstown and Martinsburg we will get in the air.  Hagerstown would give us 75-100 miles of cushion between the storm and our flight path heading back south. I had to figure in saying our goodbyes and that would eat up at least another 45 minutes so I was padding my safety zone. 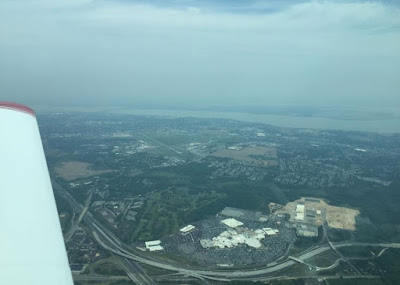 The flight South was uneventful. I picked up flight following instead of filing. It was really hazy in the Philly class Bravo but once we were south of KILG and approaching Dover the visibility improved. Despite being on flight following with Philly, one must be aware of the sector altitudes. I maintained three thousand and had to clear that last box on the north west side of KILG. Unless a pilot hears the magic words "cleared into the Bravo" you need to be mindful of your altitude and location.
Philly handed us off to Dover and we road along until turned loose maybe 12 miles north of OXB. I thanked Dover for their service and switched to Unicom at Ocean City. I reported 10 miles and then 5 miles as I crossed RT 90. I decided on a straight in for runway two zero. There was an aircraft 9 south as I passed 4 miles so I kept my speed up and made another nice landing with a roll out for the taxiway at the 02 approach end. As I taxied across 14-32 I saw the Piper landing. Mary unloaded the chairs we didn't use and I got 08Romeo secured. It took a couple of dips in the water bucket to clean all the bugs off, they were really gross!

Next up is our trip out to the Dayton area. We'll be headed to I67 in Harrison, Ohio to visit Ted and Laurie.

From Adam Z on the POA forum, the master planner and coordinator of this event.

A HUGE thanks to Andrew Porky Stanley as always but also a major thanks to EdFred who made not one but two extra trips to pick Andrew up from northern Mass and bring him back home today. The long trip is just a hell of a drive for a short period of time so Ed made it possible for Andrew to be here and thus the BBQ!

Also a big thanks to Bob Ciotti for contributing his smoker to the collection so Andrew didn't have to lug his down from Mass.


I also want to mention all the great sponsors of the FlyBQ, Smithfield who provided us with all the fantastic pork butts and ribs, POA's own Shane Schmidt owner of the Sqauwk Shoppe Who not only donated a very cool headset, go pro cable, IFR training video and iPhone holder but showed up to present it.
Sennheiser which donated an awesome Noisegard S1 Digital Headset, David Clark which also donated a great headset and Aircraft Spruce who sent a gernerous gift card.