East Bound and Down...

East bound and down, loaded up and truckin',
we're gonna do what they say can't be done.

It was a great start to the day. Mary and I had some time to play with the kids before heading out to the airport.  It always stinks saying goodbye but we know we will see Ted and Laurie again soon, thanks to General Aviation. 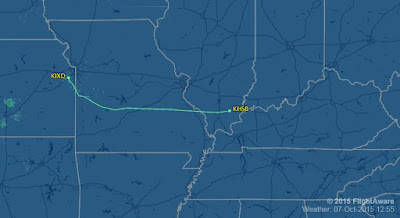 The plan today was to depart Olathe, KS around 10:30 or so and make our way to the west side of Washington DC Special Flight Rules Area (SFRA). The wx was looking good for Thursday so we figured an easy day of flying and another overnight. Multiple routes looked good but I decided on making two stops.  The first would be KHSB-Harrisburg-Raleigh Airport located in Harrisburg, Illinois.  This stop had $4.95 fuel and it knocked out another state.

As I was approaching the airport I had flipped the comm switch to channel the AWOS in my headset, I inadvertently hit the Comm one toggle and it took Approach offline. Needless to say when I checked in and asked approach how copy they said loud and clear how about us...

Mary asked what was that all about and I explained what I did after I checked in with the next controller. I told her he'll get happy again, if that's the worst he has to deal with its a pretty good day for him.

I made my way into HSB after canceling with approach. The winds favored the short runway three-two, 2764 ft., so I figured why not test the skills. I made a hard landing but was ready to back taxi with runway still in my windscreen.

I took on fuel and added some oil to 08Romeo then sat and chatted with the folks there.  Really nice guy working the desk/line and there was a corporate pilot there that was nice to chat with.  They both envied the retired life Mary and I share. 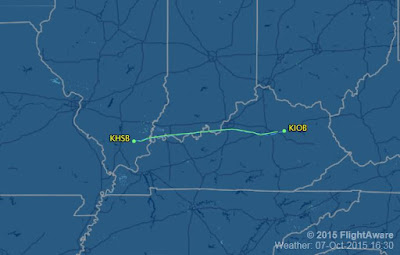 With fifty gallons on board and thirteen pounds under gross I thought it best to make use of the long runway (5013 ft.) and deal with the crosswind. I back taxied for runway six, added a notch of flaps and launched for our next stop. It was warm and the density altitude made for a slow climb out but 08Romeo pulled us aloft.

We were climbing out for our final stop of the day, KIOB - Mount Sterling-Montgomery County Airport located in Mount Sterling, Kentucky. At first this place didn't ring a bell, Once on the ground the memory kicked in.

This was a good flight and pretty quick.  Flight time was 2.2 hours and after being handed off from Kansas City Center, Evansville Approach, Louisville Approach and finally Lexington approach we advised having the field in sight after a Garmin 530 issue.

I was told to expect the RNAV GPS RWY 3 approach, cleared direct ZITXI. The 530 gave the choice of the RNAV 21, NDB 3, NDB 21 but no RNAV 3. The plates were there on my iPad mini 3 and Foreflight. I advised approach I could not get the RNAV to load, I'll take the NDB 3. I ended up canceling once I had the field in sight and made my calls on Unicom, coordinating with a freight hauler flying in, in  a Cessna 404 Titan.  I was closer to the field but I knew he would be on the ground and out before I landed so I told him that and he laughed. I set up number two for the field.

Mary had called ahead for a room at the Fairfield Inn and we had the use of a crew car since we filled up and hangared 08Romeo. We literally jumped into the vehicle, a Hummer H3. As we were leaving I remembered being here before, back in August of 09 helping my friend Jeff bring his new plane home from Texas. We had a crew car that died on us as we pulled out into traffic...ahh the memories.

﻿
Mary and I grabbed dinner at the Cattleman's Roadhouse right next door to the hotel.  Food and service were excellent! We ordered dessert to go and after getting showered and crawling into bed we enjoyed the peanut butter pie.  Time for sleep...

Rise and shine, it's a beautiful day!

We slowly got our act together and packed up our belongings. I never schlepped so many bags in so many hotels in such a short time, it's getting old.

We had the complimentary breakfast then made our way to the gas station to top off the beasty box (Hummer). Mary grabbed a few bottles of water and cherry ice Gatorade for me. 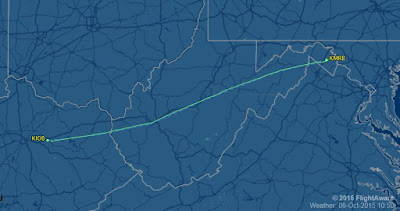 08Romeo was on the ramp and ready to go. The folks at Mt. Sterling really get customer service. I loaded up the bags and completed my, what seems like, daily preflight. Everything checked out fine and we climbed aboard.  I had to enter the flight plan on the Garmin 530W and the Ipad mini 3, which by the way, worked out perfect this whole trip.

We were soon climbing out and switching over to Lexington approach. I was cleared as filed and on our way to KMRB - Eastern WV Regional Airport/Shepherd Field located in Martinsburg, West Virginia. It was nice to ride along with minimum IMC at .2 for pushing through layers. Lexington handed us off to Indy Center and in turn we got multiple hand off's along the way; Huntington, Charleston, Washington Center and finally Potomac. The names were all sounding familiar and the terrain getting flat. We are almost home.

﻿
﻿
﻿
﻿
We taxied in after a smooth landing on runway two-six. I was headed to Aero-Smith for a top off and nature break. Excellent service once again and a quick turn around for our last leg home. We settled up the fuel bill and saddled up for home.

I needed to chug and plug my flight plan for this last leg and then I contacted clearance delivery.  Again, as filed, we were good to go.  I taxied out to runway two-six and following a line up and wait, I was cleared to take off. 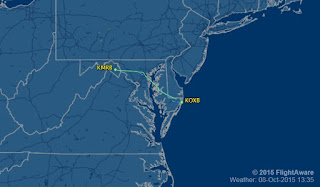 I was handed off to Potomac approach as I climbed out direct to the MRB VOR. The next sector for Potomac gave me vectors to clear the arrival corridor into Baltimore and that took some time. Once cleared I was turned direct Baltimore and my route was amended. It was direct BAL VOR then SBY then direct KOXB, Ocean City.  Approach nixed the JAYBO intersection, no big deal.  I'm now flying along counting down the time to home when approach comes on and directs me to fly a 130* heading after crossing Baltimore. I confirm and continue on.  Shortly after that exchange I'm handed off to the next Potomac sector, who decides to give me a vector for traffic. I'm once again turned direct SBY then home once the traffic is no factor.
﻿

﻿
﻿
Once clear I'm handed off to Patuxent, friendly voices that I am used to dealing with. Pax turns me direct for home and we are on our way. Only problem I'm plowing through build ups and its pretty bumpy.  I request lower as soon as possible and I'm only given a descent to four thousand. I ask for lower again letting approach know it's pretty rough in the build ups. I finally get three and break out just below four thousand. I advise I have the wx and continue on, trying to locate OXB. Finally! Pax approach 08Romeo has the field in sight. I get the cancel on the ground or with me in the air...blah...blah. 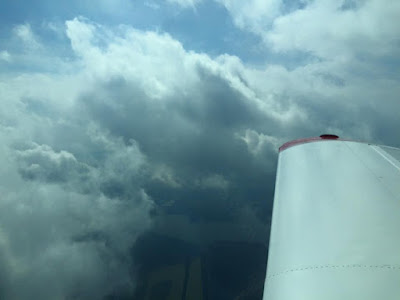 I cancel and switch to Unicom, it's good to hear OC traffic and even the old airfield up north New Garden that's on the same frequency.  There is one plane inbound and we coordinate, he's shooting the GPS 14 and I'm making a straight in if spacing permits. I'm on a 2 mile short final as the Archer clears the runway, great timing. I made multiple comments on final about how good the OC skyline looks, I'm home, It's hard to concentrate.  I do roll my last landing on the runway...sweet deal to close out a perfect trip.
﻿ 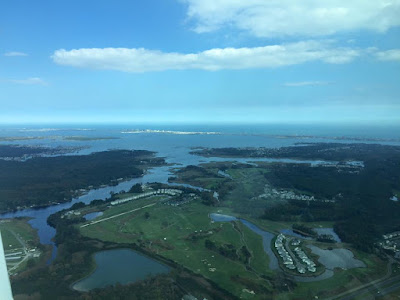 08Romeo is tucked in her hangar and will get washed this weekend and an oil change Monday. 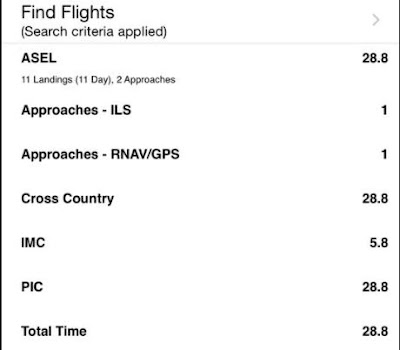 I finished up the week just shy of 29 flight hours, almost six of that in IMC. I added seven new states, nine new airports and shot two approaches.
Posted by Gary at 9:43 PM

Fantastic trip, Gary! Thanks for sharing. I'm envious - I would love the opportunity to explore a new part of the country. Heck I still haven't even landed in Delaware, yet! :-)

At the risk of making a redundant post on your blog that I made on Victoria's recently, I think I know what went wrong with the RNAV 3 at KIOB. Check out this link:

Scroll through until you get to "RNAV (GPS) approaches with LP minima removed due to lack of descent angle". You'll see that the RNAV approach to runway 3 at KIOB is included in that list. I had this same issue with my 430 that affected some local approaches (Le Roy, my former home base...one day, the approach just wasn't there anymore). The fix was to update the software to the current version (free from Garmin, had to pay technician time at my local shop for the install). The update also readies the Garmin box to display ADS-B IN information if you plan to go that route (financially, I am coming to the conclusion that an ADS-B OUT solution will work best for compliance and I can just continue using Stratus for ADS-B IN with display on the iPad).

Chris, Thanks! I am going to make sure the software is updated when I go in for my IFR cert update and ADS-B install.

I honestly didn't check the 530 since the plate was available on foreflight I "assumed" it was good on the garmin. I filed the morning we left and changed from MRB to IOB, lesson learned.

I should add when I did the NOTAM check through foreflight nothing came up. I just went and looked again to make sure I didn't miss it, nothing listed.

Nope - it's a Garmin issue, there won't be a NOTAM. If you looked at the list of affected approaches, it's not very long considering the number of RNAV approaches that exist out there. I could see some people being completely unaffected by it. A bunch of us caught it here early in the year because Le Roy was affected (but only one RNAV approach was impacted, the RNAV approach for the reciprocal runway was fine).

Either way, it's a great reminder to preflight your avionics, isn't it?

Congratulations again on taking such a terrific trip!