I was ready to post this write up and somehow, with my great computer skills (NOT), deleted the entire post. So, here's a try at posting, take two!

Following the fourth of July holiday, Mary & I hosted my brother and sister-in-law for a quick weekend at the beach. I say quick because when your having fun, time always slips by. We enjoyed a great dinner Saturday night at the Hobbit after a day of shopping for the gals and golf for the guys. Once again my brother kicked my butt. Joe and Janice are off to Florida to see the grandkids and enjoy some down time.

Fast forward to Friday. After swapping text messages with my sister Denise, she decided to visit for the weekend. Her husband Dave was heading out on a motorcycle run with the boys, heading to Williamsport, PA. The plan was to meet Denise at Wilmington (KILG) for  quick hop via 08Romeo. I wanted the flight time and saving her the drive in beach traffic was a big plus.

I finished up work and made a quick stop at the house to pick up my main set of plane keys, they were in my SUV. With a quick change to golf shorts and a clean t-shirt I was out the door and headed for the airport. 08Romeo needed some fuel so I took on enough to have fifty gallons on board. I had filed for my flight since there was a good amount of cloud cover and picked up my clearance with Potomac Clearance Delivery.

I was soon climbing out, advising ocean city of my departure to the west, last call. Over to Patuxent and with an IDENT my position was verified. Pax climbed me to five thousand and turned me direct Smyrna (ENO). Once handed off to Dover I requested seven thousand and got six. I was trying to clear the tops while dodging all the buildups. Dover eventually gave me seven thousand and as I leveled off I was handed off to Philly and immediately given four thousand. 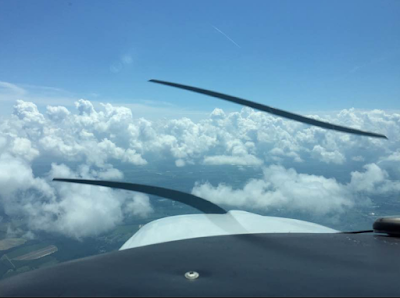 I trudged along getting some turbulence along the way until Philly dropped me down to three thousand. Not bad, below the clag and the ride was ok. I reported to Philly that I had Wilmington in sight and that I had the updated weather. Philly handed me off to the Wilmington tower and I was cleared to land runway one.

I was a bit early, as planned, so I could meet up with Dale at Red Eagle Avionics.  I was picking up my dead Collins radio and purchased a back up Collins NAV radio and glideslope to keep as a spare.

Denise walked by the front door so I said goodbye to Dale and headed out to carry my sisters bags. We loaded up and got the fan turning to provide some cool air. Denise informed me this was her first ride in 08Romeo, obviously it's been a while since her last ride in the club Archer October 2008. I did go back and check my blog, Denise and I made the trip to Wilkes-Barre in October 2010 in 08Romeo. I picked up my clearance with Wilmington ground and taxied for take off. I selected one-nine over two-seven since that would put me direct ENO. I climbed out at seven hundred feet a minute and was handed off to Philly departure. 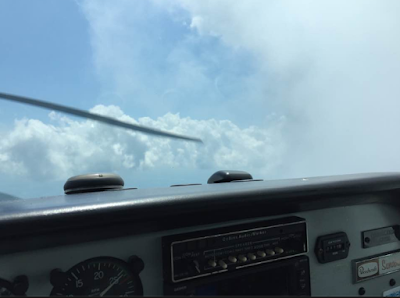 We were off...enjoying the ride and plowing through a few clouds along the way. My sister doesn't care for instrument conditions (IMC), she sat straight up and leaned back as we entered each cloud. Once handed off to Dover I requested higher and we road along the tops. I was enjoying a tail wind for the leg home when Dover amended my route, pointing me direct Salisbury.  This was the second time in as many flights south so, since the radio was quiet, I asked why they keep routing me that way. Dover explained it was for radar coverage and they would turn me direct as soon as the could ID me. Fair enough, I responded, they usually turn me direct once south west of Georgetown, so its not to far out of the way. 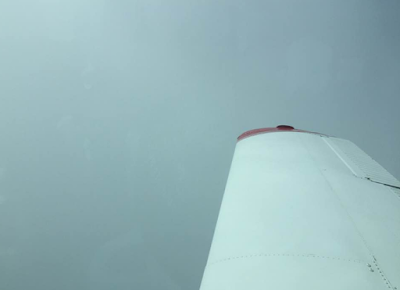 We eventually were turned for Ocean City and I canceled IFR once I had the field and there were no low lying clouds. Aircraft were landing three-two so I fell in line and made a nice landing. 08Romeo was home and my sister enjoyed the ride.

After getting home I grabbed a quick shower and got dressed for dinner. We headed out to the Ocean Pines Yacht Club and enjoyed the eats and conversation.

Saturday was antique day. After hanging out on the back porch enjoying the cool air and chit chatting we decided it was time to get motivated. Doing our best impression of American Pickers the three of us headed out to some of our favorite hot spots. The first stop provided a few treasures for both ladies, I didn't find anything that peaked my interest. I did manage to hold off the attack of both ladies as they tried in vain to convince me that we needed another lamp for our spare room. It was just one small battle. 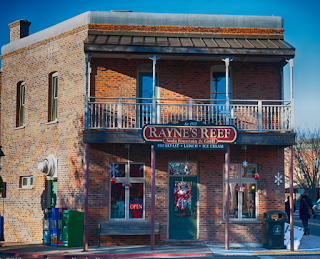 With booty safely secured in the SUV we loaded up for Berlin Maryland, America's Coolest Small Town 2014. The movie Runaway Bride was filmed in Berlin. We made a first stop for lunch at Reyne's Reef, good food and service with a quick turn around. Now that the ladies were refueled we headed down one side of main street and back up the other.  I did manage some time in the toy store that has antique toys from my childhood.  Trains, cars, pedal tractors, army men, pinball and just about any toy you played with was on display. Denise and I had a good laugh pointing out the Christmas ornaments that our Mom and Dad had, along with Halloween decorations and costumes.

With more treasures stored away I pointed the ground transportation back to Ocean Pines. We all relaxed for a while then cleaned up for dinner.  Tonight it was Italian, Restarante Antipasti. Denise and I enjoyed the Gnocchi alla Contadina and Mary had the Timballo Abruzzese, both excellent choices and the service as always, top notch. For dessert we headed south along ocean highway and west on RT 50 making a stop for ice cream at Dumsers.

I think we all slept in Sunday, including the zoo. Ziva eventually wanted out and her breakfast too, so I was first up. After taking care of the zoo I played around on the computer reading the flying forums until the ladies got up. I made a quick bacon and eggs breakfast and then we sat and chatted. The plan was to head to the airport and have the fan turning by eleven. Mary was staying home since she had the start of a migraine so Denise and I headed out. We soon hit a traffic jam just outside of Ocean Pines, apparently there was an accident at RT50 and RT 589 which had us sitting. Traffic was rerouted along a service road and we made it to the airport in just less than an hour for our eight mile ride.

I once again filed for each leg since there was cloud cover. 08Romeo climbed out on a full belly of fuel with density altitudes reported at eighteen hundred feet. Once again flying a two-seven-zero heading for ID then turned north for Smyrna (ENO). Once handed off to Dover I was given direct Wilmington, a course adjustment of a few degrees. We were once again climbing through on top and enjoying the ride until Philly lowered me for the airport. Denise didn't seem to react to the clouds as much this trip as I shot through a few holes working my way to break out along the Delaware river. I was cleared visual runway two-seven and made a nice landing, turning off on Kilo to taxi to red eagle. 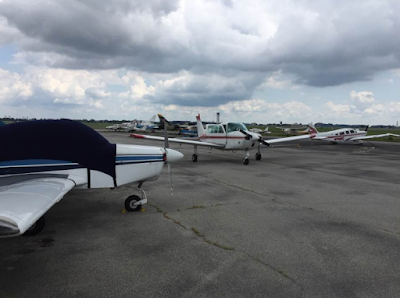 I carried my sisters bags out to her car and she thanked us for a fun time. Always big hugs and telling her I love her to end our visit. I am so happy that I am close to my sister and brother, they mean the world to me.

I climbed back aboard and picked up my clearance for the last leg home. I climbed away from Wilmington  and contacted Philly for my radar vectors to join V29 to Smyrna (ENO). Rinse and repeat with Dover and the route change followed by canceling with Patuxent and landing on runway one-four at home. It was a great time flying this weekend and an even better spending time with my sister. Mary and I hung out at home the rest of the day and called it an early night.

I just love general aviation, it keeps me close to my family and saves hours of drive time.
Posted by Gary at 11:30 PM

I remember those drives from DC to the ocean. Horrible. So flying would be much nicer and quicker. I think it's neat that you're so close to your siblings. Family is so very important. Hope Mary's migraine wasn't too bad.

The notion that general aviation keeps us close to our loved ones is not something that I ever considered while I was training or, really, even as I purchased my airplane. That understanding came later, but it is a big part of why I fly today.

I just gotta bust your chops, though. Way to publicly call-out your sister as a liar by going back to your logbook! :-)

Chris, You really had me laughing. I didn't exactly say liar...... I guess more of a lapse in memory. In still laughing as I type this.

So true on GA such a big part of our flying. I can't imagine a road trip to Wilkes-barre or you back to Michigan .