Charles G and I swapped text messages and phone calls to lock down a date to fly, today was the day. It was time to get back in the air, to get back on the horse.

I guess I slept ok last night, Despite being a bit nervous. I got up this morning and flowed through the morning rituals; feed the zoo, clean up, update the banking and check my flight gear. Insert the needle scratching across a record noise, yes the old vinyl kind. What is this last step that I speak of? Why it's the first steps in getting ready to FLY! That's right....F L Y

I made sure my iPad was charged and ForeFlight updated, check. I packed the only video camera I had left, Activeon Gold, and got it stowed in my flight bag. My Lightspeed Zulu's are here at the house, they are packed and ready, batteries good. I also packed the CRAZEDpilot In-The-Ear Headset I bought, but never had the chance to try them out, today I would give them a try. 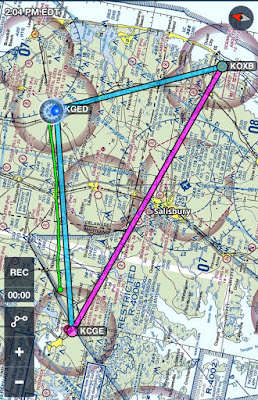 My haircut was scheduled for noon, the same time Charles and I planned to meet at Ocnean City, KOXB. With a quick phone call I changed my hair cut time to 4pm and off I went to the airport. I did have to dig out my RAM camera mount that was packed away in the hangar, thankfully, I guessed right and found it without delay.  My nervousness was ramping up, I could feel my heartbeat pounding in my chest.

Wanting to calm down a bit I headed to the terminal to wait on Charles who was just maybe ten minutes out. To use a Charles phase I was "creeping" him on flightaware. Everyone at the terminal wished me good luck, they are like family, and they all know the story and struggle to get back to this point.

Drawing a deep breath, I pulled open the office door and walked out across the ramp to Zero Seven Tango. Once at the plane Charles and I chatted, it was so good to see him.  He could tell I was wound a bit tight so we chatted a little more then climbed aboard. I was losing sight of the fly time about to happen, and instead everything was starting move faster in my minds eye then actual time. As Mary would say, I had that look. Charles quickly distracted me handing the checklist over so I could take part in the CRM duties. Now having time to think about that it helped diffuse my nervousness.

CRM is used by flight crew (and others in a safety critical role within aviation) to enhance the safety of every flight. It promotes the use of non-technical skills, like teamwork and decision making to ensure sound situational awareness and problem solving.

The pre-start went fine, as well as the taxi out and run-up. I had a bit of the shakes, maybe it was the adrenaline rush taking over. 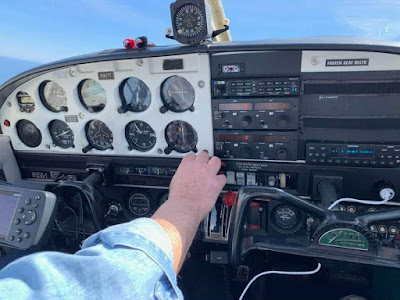 My heart was pounding, I wondered if my headset was really a stethoscope. We were rolling, Charles did a great job verbalizing everything and as we left the ground I looked out the right side window to see the beach along Assateague. The view was breathtaking on this sunny day. Oh how I missed the view. 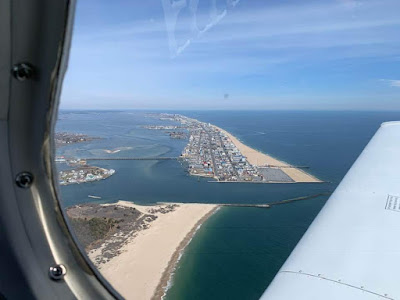 We turned north and the full view of Ocean City filled the windscreen, it was like a new discovery all over again.

Once west of the airport and clear of any traffic, Charles transferred control over to me with the your plane, my plane confirmation procedure. I felt rusty and chased my vertical speed a bit as I worked to keep my altitude on the mark. It was good to touch the controls, absorbing the peaceful focus needed and enjoyed by pilots. I missed that focus, the view, the sounds and everything about being in the plane. I missed the camaraderie of fellow pilots sharing the flight time. 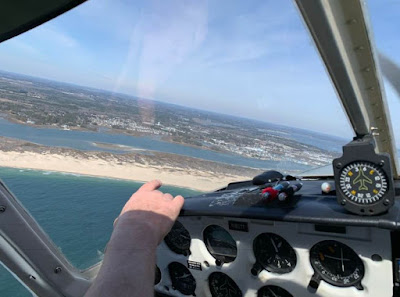 We once again transferred controls and Charles made a nice landing at Cambridge, KOXB.  We secured the plane and headed inside for lunch only to find a packed house. There was a private party, and we were informed that Kay's was closed to the public. We turned and headed back out to the plane. The next stop for lunch time eats would be Delaware Coastal in Georgetown, Delaware (KGED).
Charles started up and taxied out for runway one-six. I handled the checklist as we went through each item with Charles confirming.  Zero Seven Tango rolled down the runway and once again was in the air. Our flight path followed a seventy degree heading over to GED and entry to the pattern.  I didn't fly this leg, instead, I enjoyed the view and the sounds. Charles rolled on another landing and we taxied to the ramp shutting down next to two jets.

Arena's was open and we grabbed a booth along the windows.  We each ordered the BLT (it was huge) and a cup of crab soup, it was really good. We enjoyed lunch and talking about flying and my return to the air.
Panchito, the B25J Mitchell bomber hangared at GED taxied by the restaurant.  I tried to grab a quick video, but only managed a tail shot as it passed by.
We finished up lunch and headed back out to the plane. Charles sumped the fuel and I checked the tanks.  It was time to climb aboard and get the fan turning for our return to Ocean City.  By now it was actually warm enough to taxi with the door cracked open to provide some air flow.

I did get some flying and radio work in as we approached KOXB.  There was one plane that departed and one that landed. The pane on the ground had to back taxi (NOTAM for taxiway) so we slowed down and entered on a right base. With the transfer of control completed Charles added in flaps and pointed for the runway.  I had left him a bit high but he knows his plane and made a smooth descent and landing.  We also back taxied and shut down at the terminal.
It was an AWESOME day!  I am so glad Charles got me back in the air. We had a blast flying around, grabbing lunch and talking airplanes. Charles was right, I'm ready to ramp up the airplane hunt. 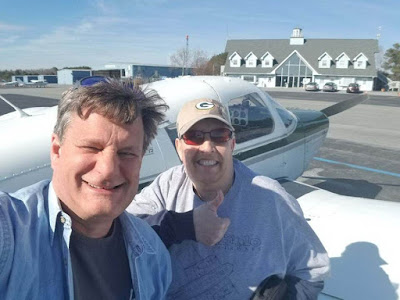 Gary, I'm just scratching the surface here. This looks like a very cool blog. Mine is quite new in comparison, but feel free to check it out. http://n32052.blogspot.com

Thanks for checking in!

I'll head over and read through your blog. I hope you don't mind me adding the link to my favorites list.

Gary, reading this made my day! Just awesome.

It was time for the next step. Now I need to lock down a plane. We have two on our radar. Updates to follow.....