The anticipation ramped up yesterday once Bill confirmed he would be flying 3 Tango Charlie to Ocean City tomorrow.

I decided I best get over to the hangar and clean up.  I loaded up Ziva girl and headed to the airport. Ziva Diva went for a short run then came back to hang out while I went through extension cords and set up the charger on the tug.
I also broke out the leaf blower to clean the floor, Ziva went and stood outside the hangar, she wanted no part of that air blast. 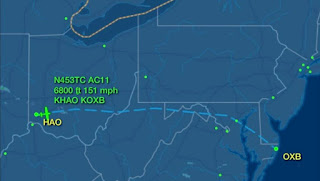 ﻿
The flight to OXB took approximately three hours. I had my camera, hand held radio and iPhone to track the flight.  Mary and I opened up the hangar and positioned the tug across from the hangar on the grass, ready for the arrival.  We then got back in the SUV to wait out the last 30 minutes of the flight. 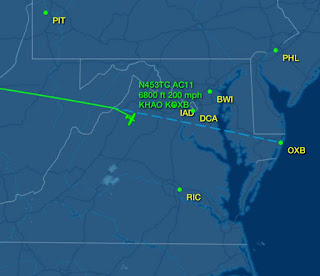 Together, my bride and I watched a school plane do round after round of full stop landings. I'm not sure how Mary felt but my nervous anticipation level was peaking. Then I heard it...."Ocean City Traffic, Commander 3 Tango Charlie 11 miles west, inbound full stop three two."
The school plane had just landed and worked its way back to three-two for another round. I told Mary the Cessna and Bill will meet at the crosswind, I had no doubt. Sure enough as 3 Tango Charlie made its way in, the school plane turned crosswind in front. Bill made a 360° and entered on 45° for the left down wind, advising number two to land. 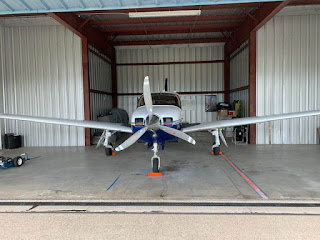 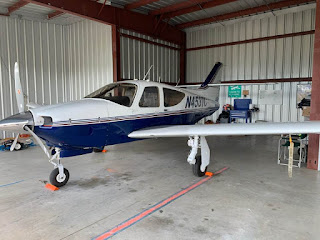 I did manage some video, I only wish I had set the zoom a bit higher. More pictures and maybe another video tomorrow as I get things set up. Until transition training is complete I'll just have to sit in the left seat and make airplane noises.
﻿
Posted by Gary at 7:15 PM

Congrats! I don't know much about Commanders. Is that a Socata? Looks nice.

Nope, not a Socata. It’s a Rockwell Commander; roomy, retract, flight plan for 130 knots. Burns between 9.5 and 11, depending where you run it.

Cool. Funny, shortly after I wrote this, turns out my new hangar neighbor has a Commander 114, N4832W. Maybe I can bum a ride with him soon to see what they are like.

What a nice looking Commander! There is one just like it at TKI (McKinney TX), for a moment I thought you'd been in DFW and not told me! Of course I wasn't here, I was in St Louis.

No, not in Texas, at least not yet. Working on transition training first. We hope to visit our friends in Pflugerville just north of Austin at some point.