Beech to the Beach

﻿
﻿
﻿ Finally, after multiple scrubs due to weather the Mid-Atlantic region pilots of the Beech Aero Club (BAC) were able to fly into Ocean City, Maryland - KOXB.

I served as ground transportation to shuttle pilots to our restaurant of choice, the Harborside Bar & Grill. Four aircraft made the event, two Sundowners, one Super III, and one Sierra.
I
Les was first in and parked by the terminal.  I didn't know he had already landed since I was parked on the ramp waiting to see the planes land. Hey, if I can't fly yet at least I can live vicariously through others. 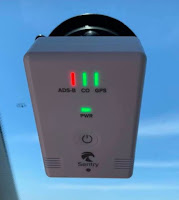 I was testing my new Sentry with Foreflight on my iPhone and it worked just fine. The pattern was pretty busy with traffic coming and going along with school planes doing pattern work. 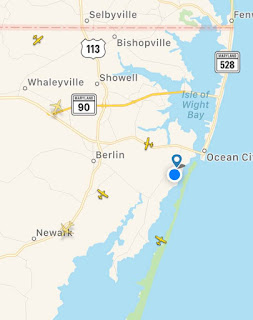 Dave with his Sierra was the second plane to arrive. Alan was number two for the field in his Sundowner.  As Alan taxied in to parking Rob landed and taxied to the ramp at the terminal. Everyone was accounted for, time to saddle up for some good eats.

We made two trips to get everyone to and from the restaurant. Crab cakes or some seafood was the order of the day. I had fish and chips, Dave, Rob and Les had the crab cake platter and Alan had the combo.  The combo looked really good, it had fish, crab cake, shrimp and I think scallops. 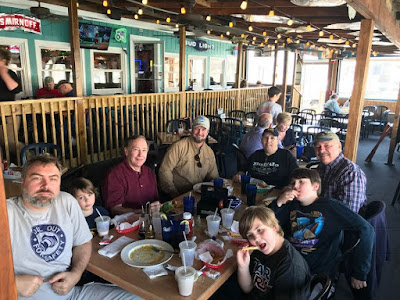 There was plenty of airplane talk about avionics, paint shops, and airport hangar rental fee discussion. Good flying chatter about airfields that are no longer available (Bader filed in NJ) and completing the Maryland airports challenge.

It was a fun day and a beautiful day to fly. I'm looking forward to the next Mid-Atlantic event and hopefully attending with our new plane.
UPDATE: 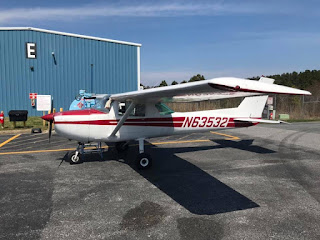 Alan spotted a plane at the self-serve fuel pump and he recognized the tail number. He told us it was the plane he first soloed in, in Greenville, NC.
Thanks Bill F for the reminder in your comment.  I grabbed the photo from Alan's facebook post.﻿
Posted by Gary at 2:52 PM

Sorry I haven't been commenting but I'm still reading. I can feel your excitement building. Soon.

Thanks for checking in. I am so far behind on reading my favorite blogs...retirement is busy! :)

I hope you and Jim are doing well, I have been following his progress on FB and your blog. Nice to see your son visiting you both.

Thanks for checking in! I’ll make the update to the blog post. Those Super III’s are rare.

Gary, I was in the Red and White C150 getting fuel as you were shuttling folks back and forth. While I was there, I think someone in your group recognized my tail number as an aircraft he soloed in back in the 80's. Small world!

That was Allen. Indeed, what a small world. Every time I hear the tail number from my solo plane it brings a smile to my face. Good memories.