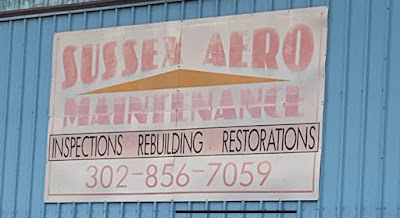 The bottom cowl is clean and ready to be hung when the repairs on the brake valve are completed.  As I stated in the title this is a continuation of Monday's calls.

I swapped emails with Bill H of the Commander Owners Group.  You all remember Bill, he came over to Ocean City while on vacation in Lewes to take me flying in my new plane.  Yes, he had to fly left seat, I didn't have any time in type.  Bill owns a beautiful Commander 112A 390 Super Commander and he plans on having the annual done at Delaware Coastal. This got me thinking, so I sent an email requesting the info on who he was using that had Commander Experience. The email response pointed me towards Sussex Aero, and Rob D.

I made the call and had a nice chat with Rob about Commanders and even Debonairs.  Unfortunately his shop is also slammed so I won't be able to get 3 Tango Charlie taken care of until the week of the 6th.

I want to say fast forward but it has seemed like ages. I swapped a few calls with Rob from Sussex and he is sending over his man to take care of 3 Tango Charlies brake issue.

Steve came through the gates around 10:45 this morning and quickly set up his tools to begin the work.  He was happy to see that both top and bottom cowls had been removed.

The first step was to remove and cap all the brake lines.  Since most of the hydraulic fluid had already leaked out we didn't have to deal with much of a mess. Steve had a pan set up to catch any drippings and secured all lines to the valve.  I should just add that Steve was very organized and meticulous in the prep and process. 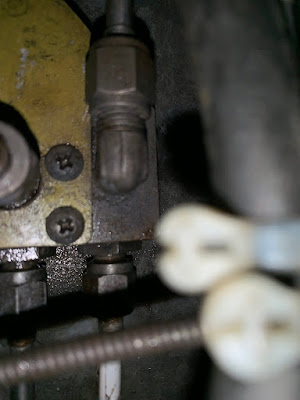 The next step was to remove the brake valve from the firewall.  The two phillips head screws pictured above had a nut on the co-pilots firewall side, no, not a nut plate, just a nut. Thankfully Steve was pretty flexible and he took the in cockpit side. I took care of the engine bay side with the screwdriver, only needing to lay on my back or scrunch in close, in somewhat sitting down position. 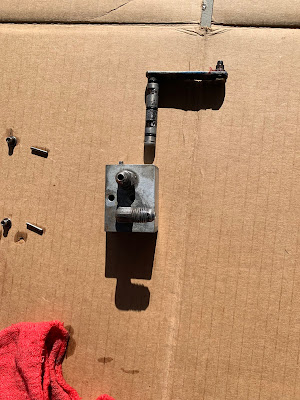 All the parts were disassembled and cleaned along with the brake valve. Once everything was cleaned up Steve removed the O rings.  The three O rings on the parking brake arm assembly were the first to go. Two were somewhat soft and one was hard. The hard one broke, this had to be the leaking culprit. 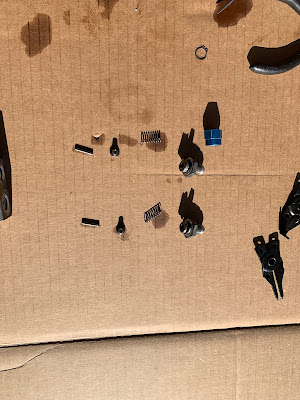 The next two O rings were replaced on the bottom fittings, they were both in like new condition. Despite being in great shape, I had the parts so they were also replaced. With the brake valve reassembly completed Steve crawled back under the plane and cleaned up the drippings that had accumulated on the firewall.

Next up was remounting the unit. The first step was to secure to the firewall.  I took the outside and Steve sacrificed the body once again taking care of the in cockpit contortions. 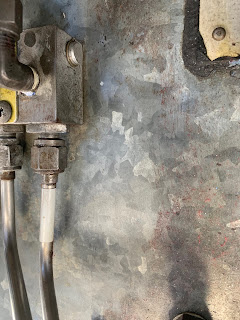 I didn't get a very good shot but you get the idea, its clean and remounted. Next Steve reconnected all the lines along with the two bottom line connections that connect at the firewall for both the right and left side brake system. Pictured below. 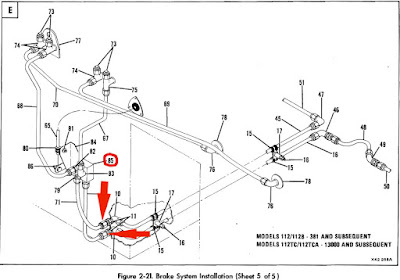 With everything hooked up and cleaned we were ready to bleed the brakes. I don't remember how the Sundowner was done but the Commander Owners Group specifically posted to bleed from the bottom up. Steve was already hooking up the bleed feed for the hydraulic fluid and also attached his homemade overflow catch system for the masters. 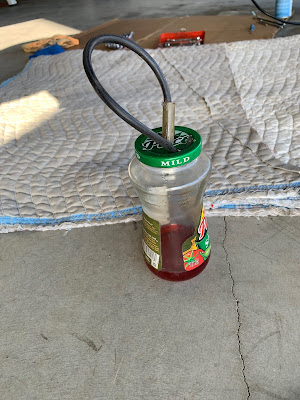 We started with the right main gear. I crawled up in the cockpit on the pilot side to watch when we had a steady stream into the jar. I heard a lot of noise maybe that was the air clearing out of the lines or air trapped in the top of the master. Soon there was a steady stream of hydraulic fluid passing through the tube and collecting in the jar. Rinse and repeat for the left mains.

The next step was testing the pedal, first the copilot side. Steve pumped on the pedal and the master was a bit too full, it spurted out the vent hole. Thankfully we had towels under each pedal and with extra shop towels I wiped the master clean. Rinse and repeat again for the left side master.

For the final step Steve crawled in the pilot side and withdrew a few cc's with a tiny syringe enough for the master to remain at a full level but not overfilled to cause the master to spurt out fluid. Next I climbed in the pilot seat and felt the pedals, they felt normal and there was no excess fluid coming out.  Mission completed!! 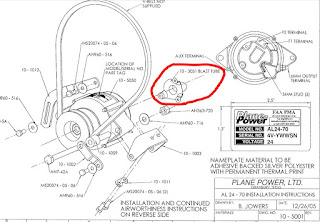 Steve gave me a hand remounting the bottom cowl and I will replace the top cowl sometime tomorrow. I did appreciate the time he took to give the engine compartment a good once over. I have a few new items to add to my squawk list.
Next up, an oil change in 15 hours. I'll be scheduling at Sussex for this work and the two items noted above. I'm looking forward to finally getting some air time!