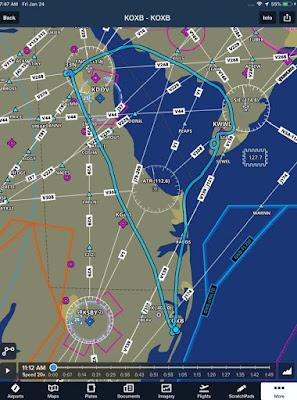 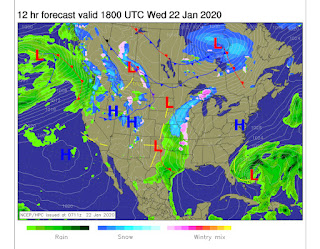 A fun day flying in the tri-state area.  Departed Ocean City on hop number one, headed for Delaware Airpark, 33N. I did pick up flight following with Dover Approach since there was traffic along the route.
The second hop today was from 33N, Delaware Airpark to KWWD, Cape May, NJ. We crossed at the top of the Delaware Bay where the Delaware river meets the bay. Visibility was fantastic! I could see approximately sixty-five miles from just off Dover to the Pottstown cooling towers at Limerick.
The last hop for the day was me getting 3 Tango Charlie back home to Ocean City. I departed runway two-eight from Cape May and climbed for the coast, circling on station until I had sufficient altitude to cross the mouth of the bay. When I felt I was safe I pointed for Cape Henlopen Delaware and continued the climb until midway across. From the midway point I nosed over and followed the shoreline for home.

It was a perfect day to fly, cool temps made for great power.  The only bumps along the way were encountered once dropping below two thousand feet as I made my way for the pattern at Ocean City.
I'm not sure whats next. I'm definitely looking forward to more fly time.  I should mention that I don't usually make new years resolutions, but, I do want to try and fly at least once a week in 2020.

I'll need to hook up with a fellow pilot to act as safety pilot since my IFR currency is up the end of February. Maybe I'll fly up to Boston and get Mike B to fly right seat and torture me a bit while under the foggles.
Posted by Gary at 6:59 AM