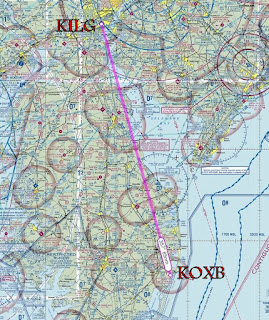 Mary and I made plans to fly to Wilmington Delaware to visit family. Mary's brother hasn't been feeling well, and it was time we headed north to check in.

The plane was fueled and the pre-flight completed earlier this week so I just needed to sump and tug 3 Tango Charlie out on the ramp. It was a bit nip this morning, there was slight breeze and the forecast temps were calling for fifty degrees. The sky was an absolutely gorgeous blue, void of clouds.  It's a perfect day to fly. 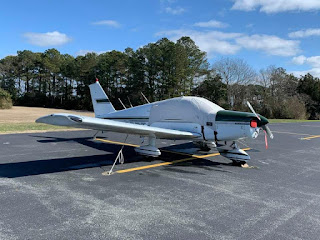 When we drove through the tenant gate I turned towards the terminal to see if Charles had left yet. Our friend flew into OCMD Thursday, but I didn't hear from him, which means he is doing Real Estate business. I couldn't resist the temptation and sent him a text advising someone must have stolen his plane and they left it here on the ramp in OCMD. I knew this to be true because a friend would have at least texted if they were in town. I did manage to get a laugh out of him and he acknowledged he was indeed busy with clients. Charles always gets a pass. He deserves it, for all the help he provided getting us back in the air.

With that bit of fun complete it was time to get 3 Tango Charlie ready to go. I shut off the pre-heats and pulled the cowling covers off, also unplugging the extension cord that is connected to our Switchbox. I disconnected the tug that had been charging, and positioned it at the nose gear.

Once I closed up the hangar Mary and I climbed aboard. It took a few minutes to set up my iPad and video camera for the flight.  With a call for clear prop the fan was soon turning and we were ready to taxi. 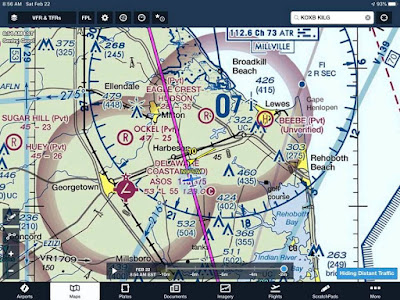 We launched off runway three-two and headed direct to Wilmington, KILG. I picked up flight following with Dover approach, south of the Waterloo VOR. My initial communication was a mess. I mumbled through that first call like a newbie...oh brother, it was embarrassing. The headwinds north Ocean City were 11 kts, approaching Dover 24 kts and north of the C&D canal 34 kts. 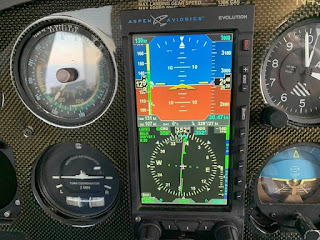 It was slow ride north but as smooth as any flight we had ever taken. With a quick call I cancelled flight following, and at ten south of ILG, made my call to the Wilmington tower.  This communication was spot on, typical of my radio work. I felt better after that. 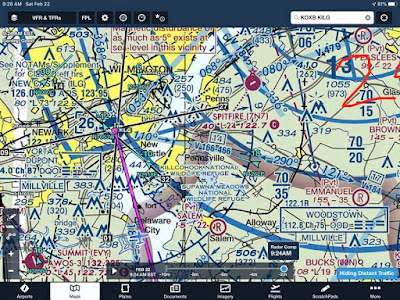 Wilmington directed me to a left base entry, number two to land following an Archer. I complied and made a nice landing, turning left on runway one one-nine, Bravo 4, Bravo to taxi into the FBO.  FlyAdvanced added 15 gallons of 100LL as directed, and we took advantage of the courtesy car (Van) to head to Mary's brother. 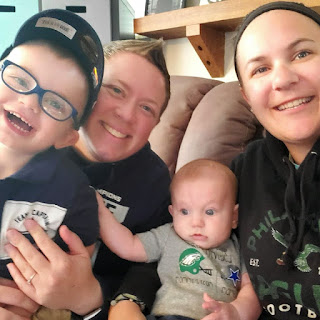 We were greeted by Mary's two great nephews, which really made my brides day. We visited for a few hours before having to return the van to the FBO. It was special to catch up with Mary's brother and both of the nephews and their parents. The two boys are growing so fast.

With the van returned, and our fuel bill paid, we loaded up for home. I had to change a video battery in the VIRB XE and then I got the plane started. The toasty engine temps from this morning had already turned to a chill. We sat at idle to build up some oil temp while I reversed our initial flight plan on the Garmin 480. With a call to ground noting current ATIS info, we were soon given our taxi instructions. Easy Peasy, taxiway Alpha to runway two-seven. I haven't taxied by the commercial terminal since Frontier airlines left, funny thing is, they are returning once again in the spring. We shall see how long they stay this time around. Insert eye roll. 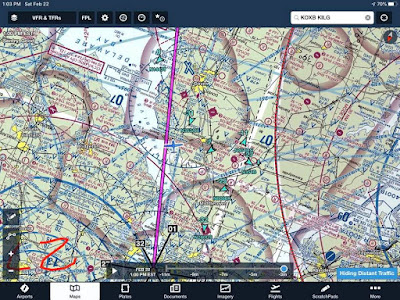 We launched off two-seven and climbed out for home. Answering the towers question of our on course heading for Ocean City, I responded 175 degrees, 3 Tango Charlie. We were good to go and soon advised to change frequency. I swapped the back up com, Dover approach, and monitored before requesting flight following for the ride home. The headwinds were now tail winds but nowhere near as strong as this morning. We did enjoy 11-17 kts heading south but the ride was brutal compared to the ride north. Mary and I were getting a pretty rough ride. 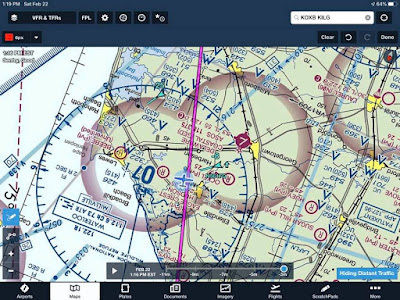 We had some traffic passing Dover and then again around Delaware Coastal KGED. Once clear of GED we canceled flight following and tuned in to Ocean City's CTAF. 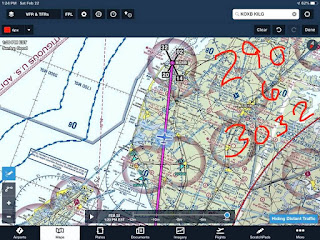 It really got rough as we let down for the pattern, crossing midfield to enter the downwind. There were two Cessna's holding short at three-two as we crossed the numbers and made our landing. With a call to advise clear, we were home.
Posted by Gary at 11:00 PM