Today the Beech Aero Club (BAC) flew into Cambridge Airport (KCGE) for brunch. I had fuel from yesterdays trip home from Wilmington (ILG) so all I needed to do was tug the plane out and saddle up.

The plan was to set up my in cockpit video along with the tail hook camera.  I wanted to check if my gear doors were starting to open once the gear was tucked up in the gear well.

I launched off runway one-four and left the airport on the down wind, pointing west for Cambridge MD. Total flight time each was was maybe thirty minutes and it was another beautiful day to fly.

The ramp was full of planes, which is always a welcome site for the restaurant. Recently I think the daughter bought out Mom and Kays turned into Katies. I for one miss Kays. Typically the food and service is excellent, today was a nightmare.  We had a large group and we all understood it takes time to accommodate when they are so busy. The only fly in their pie was that they had three square tables empty, that could have worked for our group, but instead made us wait at  least twenty minutes for a round table. The problem was the round table was full of a pilot group, and they should not have been rushed. It would have been a tight fit for our group even if they added a table.

Eventually we were seated, at the round table and then waited at least another thirty minutes for our food. The table of five that came in after us was served at least ten minutes ahead of us. Mary will tell you when I'm hungry, i'm grouchy. I was hungry, ticked that they did not use any common sense for the seating and was so slow with the eats. Ok, I'm off my soapbox.
We assembled out on the ramp for our group photo and chatted for a bit.  I was complimented on the Commander and hung out with two pilots that flew in and really liked my plane. The one pilot flew a Sierra that he refurbished. Yes, we asked him if he was a member, and to rejoin the group since he let his membership lapse. 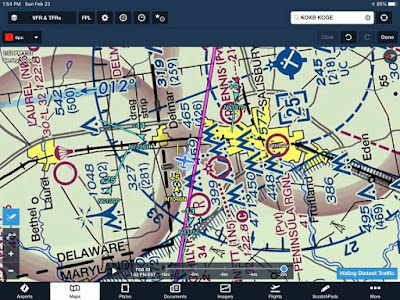 I eventually saddled up and got the fan turning for home. Plenty of traffic today with pilots taking advantage of the perfect day to fly. I made my way to the home base and made a straight in for runway one-four. 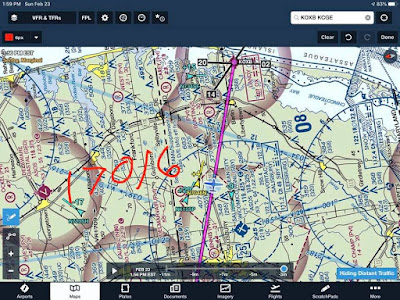 A great day and fun time meeting up with friends and fellow club members.  Thanks to Les for setting this one up, our Mid-Atlantic Regional Director and BAC for picking up our lunch tab.