Getting My Currency On 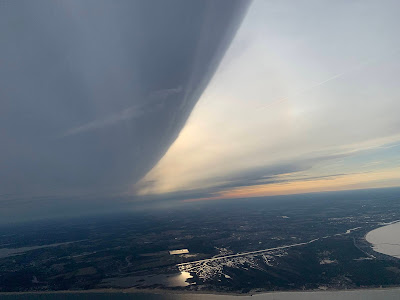 Since Mary and I scrubbed our Wilmington flight on Saturday, I decided I needed to fly today. What I really needed was to knock out approaches and reset my instrument currency.

Charles G and I swapped text messages Saturday about catching up today for breakfast. This morning he had a client he is meeting with so we pushed for lunch after his meeting was done.

I headed out to the airport to get 3 Tango Charlie ready for today's flight. Once my pre-flight was completed I tugged the plane out on the ramp and gave some thought to flying to New Garden to meet up. Charles and I connected on a phone call and he really wanted to fly, so we decided on Cape May NJ (KWWD).  Charles also offered to be my safety pilot so I could get my instrument currency reset. I was going to turn into a pumpkin in just 13 days, the end of the month. Since I still had some time to kill I made a quick drive over to the terminal to pick up my Oxygen tank that had been filled. I have two bottles so one will be going up for sale soon, most likely the M size, 22 cf.

When the Ox bottle was secured in my SUV I climbed aboard the plane and got the prop turning. 3 Tango Charlie had been plugged in since the early morning hours on Saturday so she was plenty toasty. For cold starts I give a second or two of fuel pump then crank, it works very well. Today the winds favored runway two-zero so that's where I taxied for my run up.
I climbed away from Ocean City, once again absorbing all of the beautiful Eastern Shore views. This view NEVER gets old. As I crossed the Delaware Bay I was trailed by a Cessna below and to my seven/eight o'clock position. The Cessna was crossing the Bay at just two thousand feet. I hope they understood how cold that water was in the Bay beneath them. 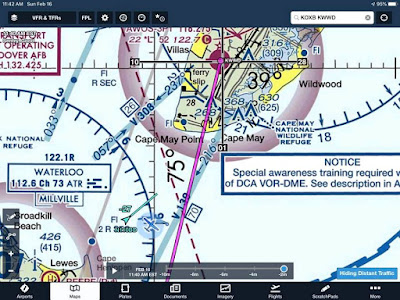 I let down for Cape May, having to circle to lose altitude before entering the pattern. Winds favored two-eight and I made a nice landing. When I taxied to the Flight Deck Diner I parked next to a beautiful tail dragger who was just getting ready to taxi out. 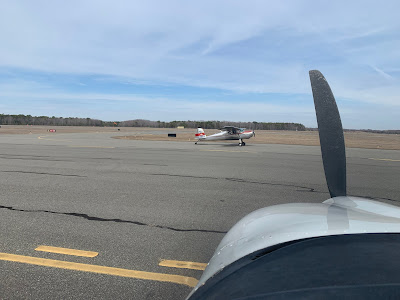 I arrived ahead of Charles but he soon arrived and taxied in to park next to my Commander. We enjoyed lunch and the airplane chat as usual.
Thank You Charles for buying today. I tried to explain the guy under the foggles buys for the the safety pilot and he responded he will let me buy when he comes to Ocean City this week. Hmmm...seafood dinner, he obviously has given this some thought. 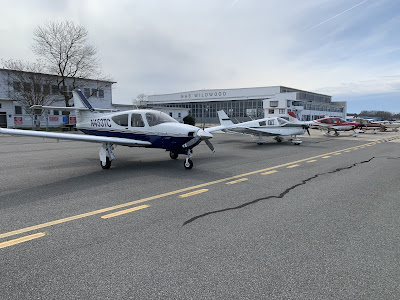 It was time to saddle up for some approach work. The plan was to shoot two at WWD, four at MIV, each with AP and then without. 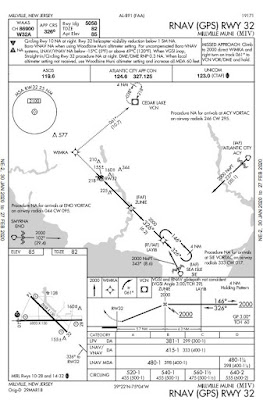 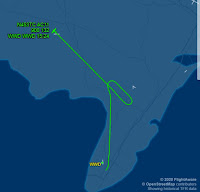 The first approach was the RNAV GPS RWY 32 at Millville (KMIV). This first approach went as planned with the autopilot. I did the procedure turn at LAYIB and headed inbound for a low approach only. After going missed I climbed out and set up for the ILS RWY 10, again with the AP. 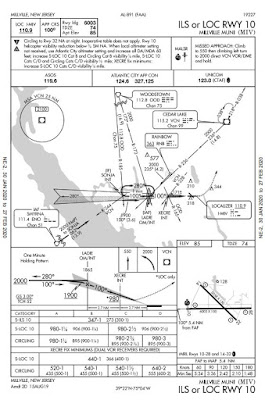 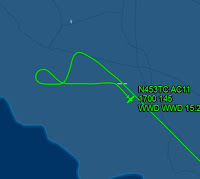 Rinse and repeat both approaches a second time but with no autopilot. My ILS was good as far as tracking the localizer, but, my glide slope really stunk, at least in my opinion. I flew all approaches with the plane configured clean, no flaps or gear, so my speed was a bit faster the normal.

After finishing up at Millville we pointed for Cape May. I was setting up for the GPS RWY 19 approach with the AP.
I enjoyed a short break from the foggles as I set up for the Cape May GPS 19 approach. The plan was to go direct KAGYS, do the procedure turn and fly a low approach only. 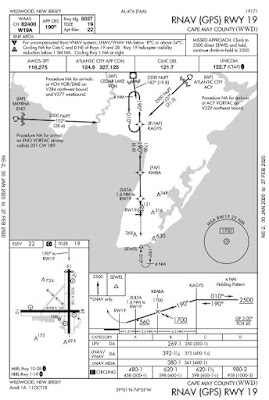 This was another good approach disconnecting from the AP around five hundred feet and then going missed. At least I was feeling better about shedding the rust and staying ahead of the plane. Once again we went missed and climbed back out for one more approach. This time headed to Woodbine (KOBI) and the GPS RWY 19 approach, running a Vectors To Final (VTF) scenario. 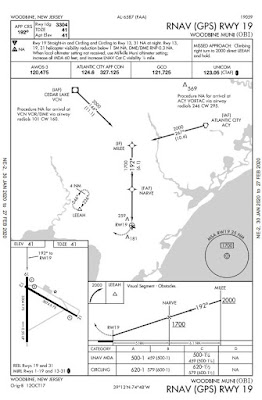 I headed north past the Final Approach Fix (FAF) NARVE so I could make turns or vector for the final approach. Just using the AP heading bug, I made a nice approach followed by another missed.

It was time to wrap this session up and head back to Cape May. This time I set the foggles aside and made the approach and landing on runway one-nine. Charles heard Chris (based at New Garden) in his Mooney so they swapped calls and we were all going to meet at Cape May. I made a nice landing and taxied for the FBO, wanting to add some fuel for the ride home. My gauges were showing half tanks, I thought I should have burned more. With a ten gallon top off on each tank I now sat at fifty gallons which calculated to a ten gallon an hour burn flying to WWD and shooting all those approaches. A total of 2.4 hours.

Charles and Chris planned on meeting up across the Bay at Delaware Coastal for a sandwich and soup, they invited me along. I was beat, and had a headache from lack of fluids. I took a pass today and instead headed for home. 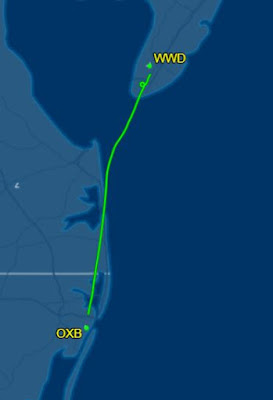 I headed for the coast having to circle and climb to gain altitude for the crossing. The cloud formation and the setting sun looked beautiful as I was just crossing over the shore at Rehoboth, DE. Why do we fly? For the VIEW!
I had a fun day flying with Charles and I can't thank him enough for enduring the right seat safety pilot time. I am once again current and now good until August 31st, resetting the clock for six more months. Now the key is to work on my proficiency.

I need a day exactly like this. I’m current through April, but I think my proficiency needs work. Well done!

Chris,
Thanks! It was a workout that's for sure. I am current once again, but, I really want to work on being more proficient with the GPS and the autopilot.